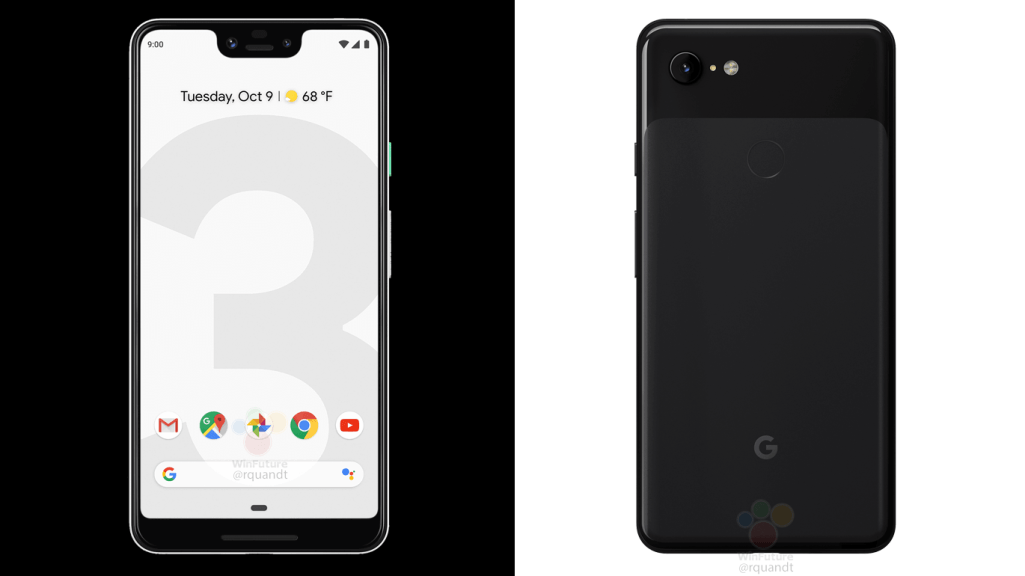 With the event just a couple weeks away, it might not be surprising that the Google Pixel 3 and Google Pixel 3 XL are leaking out again. The latest shows both the smaller notch-less model and the larger XL in even more official-looking press renders. While similar renders of the black leaked out last week, this gives us a look at a white model as well…

The photos (via WinFuture) show the Google Pixel 3 and Google Pixel 3 XL in shots that look a lot like the ones you’d see on Google’s own online store post-launch. They’re the first official-looking images to show both the black and white models of both phones from all angles.

Last week, renders showed what might be one of the device’s wallpapers, and this time we’re seeing that same wallpaper in a new white color. The gray “3” you see here has previously appeared on the official Pixel 3 teaser site as well.

While this was already widely assumed, these renders do in fact confirm one new detail about the colors: The larger 3 XL and the smaller 3 will both be available in both the white and black variants. Further color options aren’t yet confirmed.

And here’s what the smaller sibling of the two, the Google Pixel 3, looks like in both colors.

We already know almost everything Google Pixel 3. There’s going to be wireless charging on both, improved cameras, the Snapdragon 845 system on a chip and an Adreno 630 GPU, 4GB of RAM. Both will launch with Android 9 Pie. Like last week’s nearly-identical renders, too, you can see the Google Assistant icon in in the Google Search bar per these renders. That’s new to the Pixel 3.

Obviously, a few aspects will differ between the two phones, including battery size and specific display specs. The most obvious difference can be easily spotted in the galleries above — the larger model will have a near-edge-to-edge display with a cutout at the top (and a chine along the bottom bezel), while the smaller will be a more traditional look like last year’s Pixel 2 XL.

It’s unclear if WinFuture is basing this off previous rumors or their own first-hand sources, but the publication notes alongside these renders that the back of the phone is indeed glass as suspected and that the body other wise is metal. Some of sources have noted a plastic feel to the metal rail along the edge of the device, which is likely due to a similar coating to the one used on the Pixel 2.

The most recent leak besides this came over the weekend, when one Twitter tipster shared images showing what all the wallpapers on both phones would look like. The Google Pixel 3 and 3 XL will launch at Google’s annual “Made by Google” event on October 9th in New York City. Google plans to hold a concurrent event in Paris as well.

Any new thoughts on the Pixel 3 and Pixel 3 XL with this leak? Let us know in the comments.