Hands-on: The Google Assistant takeover is in full force with ‘driving mode’ [Video] 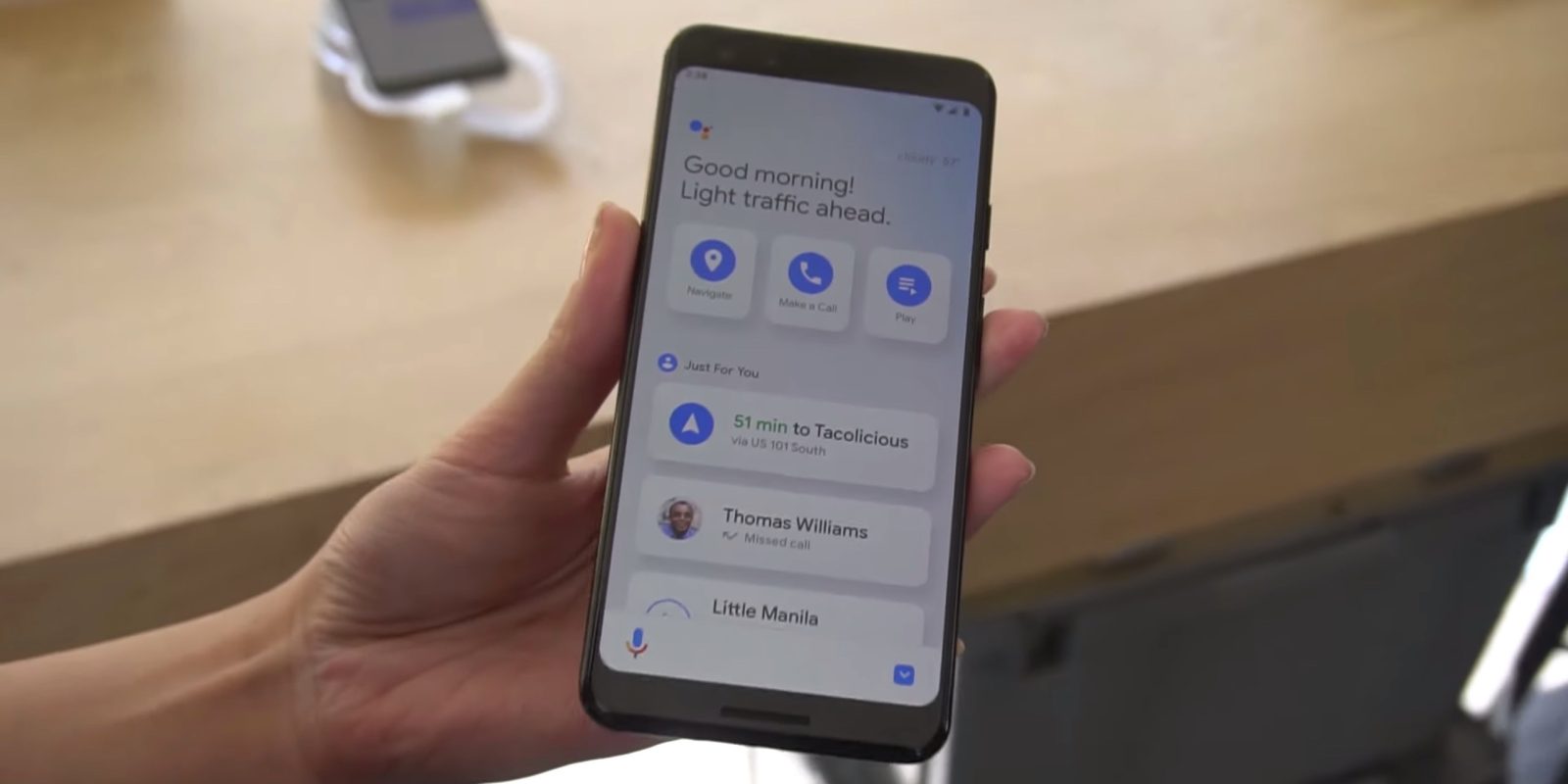 Google announced the “next evolution of [its] mobile driving experience” at I/O 2019. It was distinctly not a new version of Android Auto for phones, but rather branded and built around Google Assistant. The Google Assistant driving mode provides a peek into how new experiences will increasingly be built on top of the company’s latest “operating system”.

Driving mode is essentially the existing Google Assistant Updates feed, but optimized with much larger touch targets. A timely greeting, which is a delightful staple of Smart Displays, is under the Assistant logo with a traffic update, while the temperature is in the top-right. This hello is consistent across devices, but I somewhat miss the colorful gradients in Android Auto. It also results in the background and cards being unbearably white, especially at night.

Instead of a shortcuts carousel, there are three actions to Navigate, Make a call, and Play. A “Just for you” section shows cards for navigation suggestions based on your calendar or routine, as well as missed calls and messages. Top media rounds out the list, including what you were playing on other Assistant devices before you got into the car.

Recent navigation suggestions appear below, including general queries and specific addresses. “Communication” shows top contacts in a grid, with media being presented in a similar way. Podcasts are displayed here alongside Google News and radio stations. According to Google, a media browser experience is coming when Assistant driving mode launches this summer.

While Assistant is the king of automatic suggestions that are often not directly user customizable, it would be nice for Google to let users pin media items rather than just rely on the four that it offers. The same would also be great for what contacts get displayed above.

This single feed for Assistant’s driving mode is a drastic simplification compared to Android Auto’s four distinct pages. It in many ways reflects how Assistant is new and not encumbered by legacy Android conventions. In place of the Home button in Android Auto is the voice search that Google wants you to primarily interact with.

However, even from brief use, it’s clear that a lot of swiping is involved. There is a place for buttons that take you to single purpose screens, but it remains to be seen what interface is better in the car.

Playing content will launch a docked audio player with play/pause controls, and next track or 30-second fast forward. It can be further minimized by swiping down where the app icon appears at the center of the persistent bar.

Besides the bottom-left voice search icon, the other side of that bar features a carrot button to show/hide the driving mode feed when navigating. The directions interface itself is identical to Google Maps for Android. If users go back to the main view while navigating, the next direction will appear as the top card.

Incoming call notifications slide up from the bottom and take up a fourth of the screen with profile icon, name, and answer/decline. If a call comes in while you’re driving, navigation will not be impacted, but the bottom bar and media controls get covered.

Messages appear the same way, and like before, you can choose to hear it aloud. You can manually tap “Read” or Assistant will listen for a yes/no, with the waveform dots appearing below.

While there is a feed in the current Android Auto app experience that shows media notifications, reminders, recent locations, and messages/calls, that Android variant lacks smart features — like resuming your last played media — that users increasingly expect.

Whereas Assistant in Android Auto felt grafted to replace the old voice search functionality, media playback continuity creates an explicit connection between your smart home and car that reminds users Assistant is ever (ambiently) present.

As Google is fond of saying, it’s “early days” for Google Assistant, and the future will only show its role, prominence, and placement expand.

Before Assistant driving mode launches this summer, it will likely get further optimizations and features. Right now it seems simpler than Android Auto on phones and that’s important on the road.

As a new product informed by Android Auto, it does seem to learn from the previous UX, but could benefit from more advanced features that may be uncharacteristic for Assistant, like user customization versus just automatic suggestions.