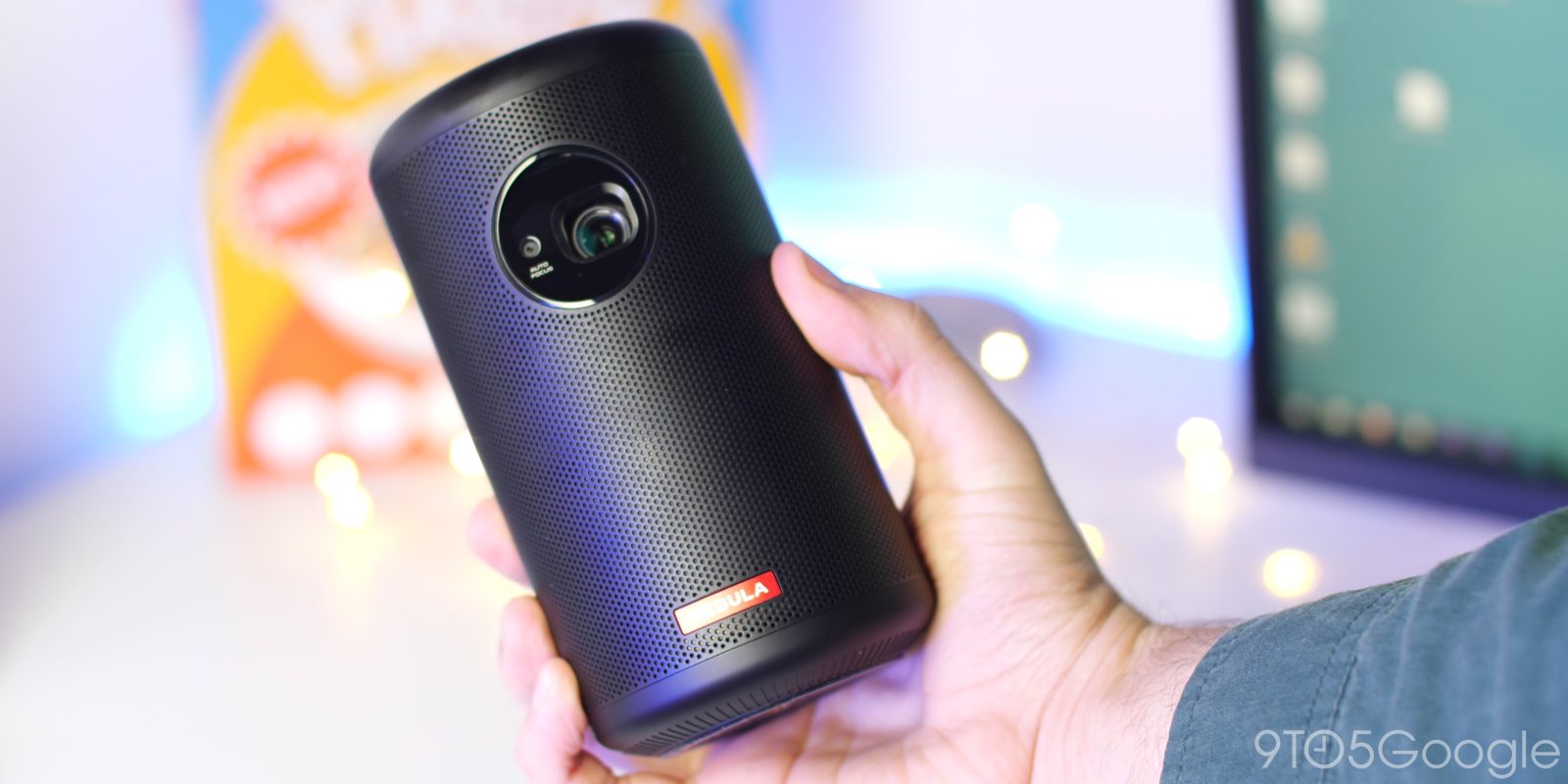 Android TV comes in a few form factors and at various price-points, it isn’t, however, very portable — so enter the Anker Nebula Capsule II.

The Anker Nebula Capsule II combines the exceptionally small size of a mini projector and fuses it with Android TV for entertainment on the go and with extra functionality baked in.

Unlike the brand new compact Nvidia Shield TV, this portable projector doesn’t need to be hooked up to a TV set, it doesn’t even need external power as it comes with a built-in battery pack and Bluetooth speaker capabilities in one compact package.

For those without the required space for a full-sized entertainment unit or that want to take their favorite shows, movies and Android TV apps anywhere they go, this might be the piece of portable tech to pick up.

With such a small form factor, it’s unclear at first glance just how good the overall experience really is. Just a tiny bit taller and wider than a can of Coca-Cola, the Nebula Capsule II’s form factor is really impressive in the flesh. Even more so when you realize that this projector is not only able to produce an image but also has a speaker built-in.

It is weighty and firm, the metal chassis definitely gives you the impression that the Nebula Capsule II can withstand quite a substantial amount of punishment — not that you should. The look is very understated but also the sheer size makes it eye-catching and it almost demands your attention. That said, you might confuse it for a small Bluetooth speaker if you didn’t know that this is a pocket projector. 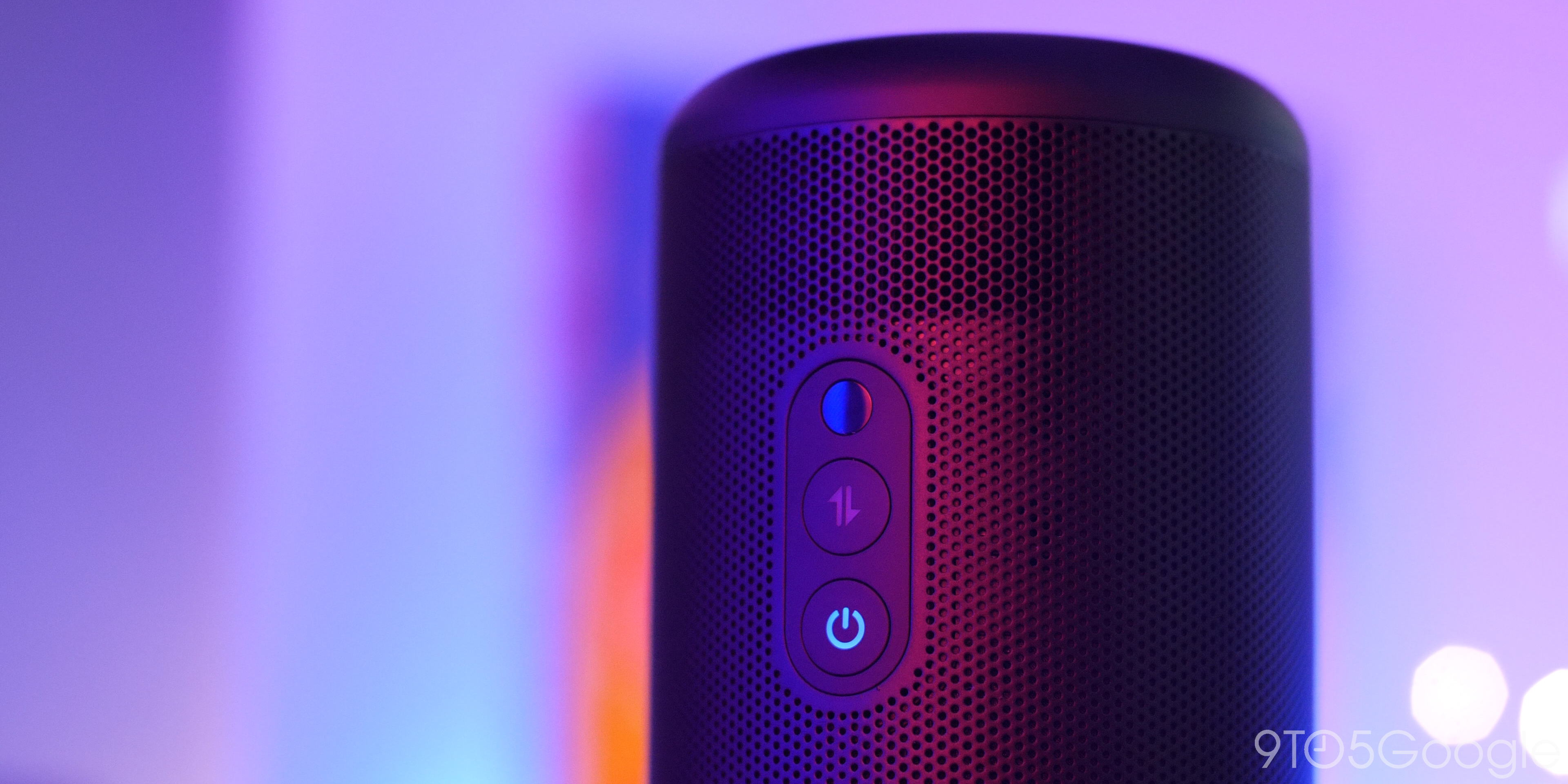 It has a series of capacitive buttons at the top of the ‘can’ form factor if you want to be able to control the Android TV UI without the remote. The remote itself is pretty standard and includes a dedicated Google Assistant button and in-built mic for voice controls. At the rear, there are just two buttons, a power button and a ‘switch’ button that simply turns the Capsule II into a basic Bluetooth speaker. There’s also a small IR receiver too.

As for I/O, there is a full-sized HDMI port, USB Type-C charge port, and 3.5mm connection included which gives you options for further device integration. The entire package is really sleek when you see many projectors of various sizes looking more utilitarian and bulky. 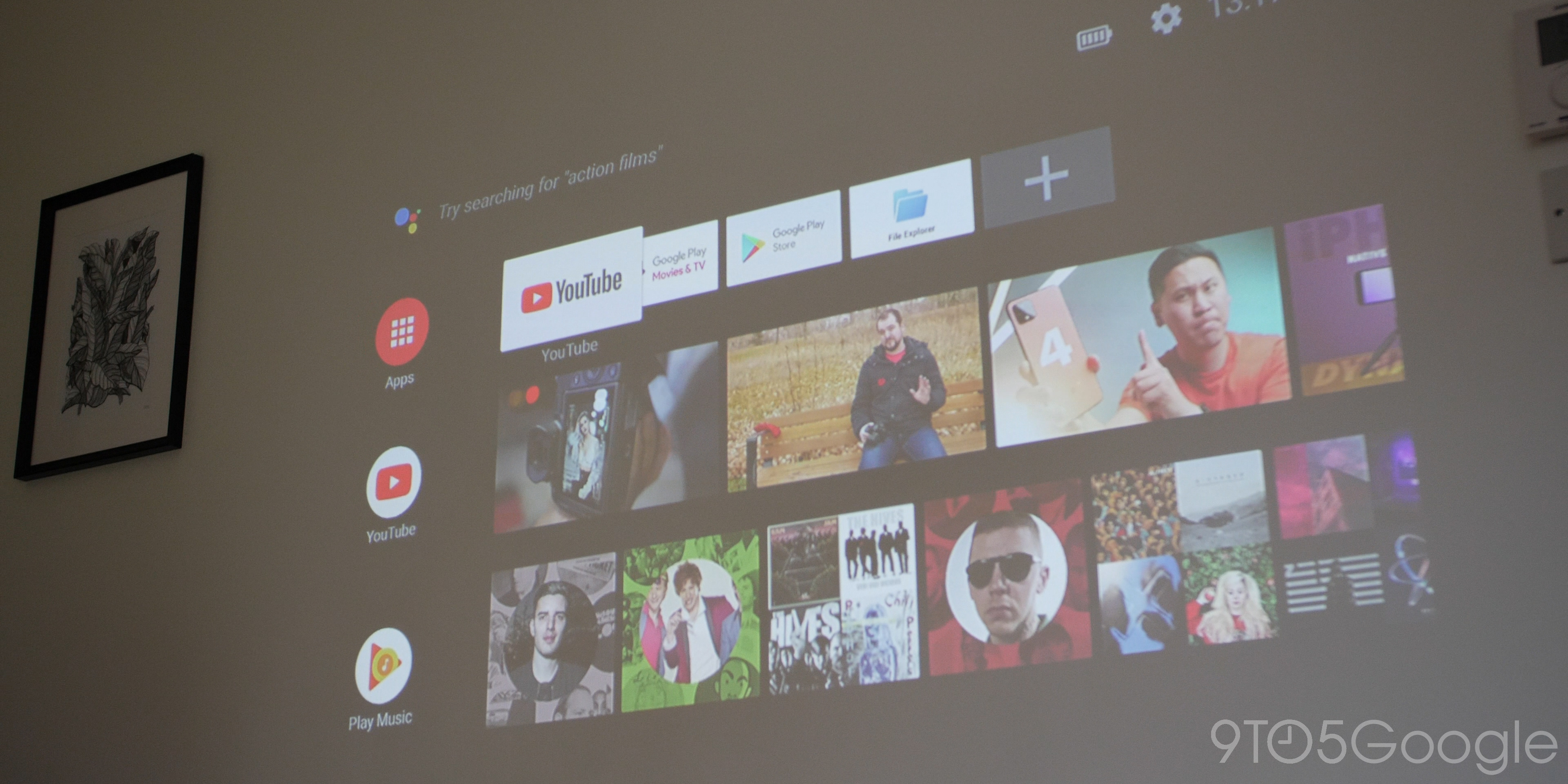 The Anker Nebula Capsule II comes with the Android Pie version of Android TV, the latest version of the smart TV OS. For the most part, it runs relatively smoothly but does have a few little things that are disappointing.

Having Wi-Fi, 8GB of internal storage, and Android TV does mean that you can sideload a myriad of apps to enhance your experience. Unfortunately, Netflix isn’t ‘officially’ supported. That means you’ll have to sideload a version of the app to get your fix of Stranger Things and Bojack Horseman. Luckily, that is easy enough thanks to the Nebula Connect app — which adds the app with a single button press but to access the app, you’ll need to use the app and launch it that way each time.

Once you’ve signed into the Google Play Store, you can download a whole host of apps to round out your viewing experience. Bar the quite obvious Netflix omission, almost all of the most popular apps from Hulu, HBO, and Twitch are there for you to install. You will need to sideload Amazon Prime Video alongside Netflix.

Despite not having ‘official’ access to two of the most popular streaming apps, the biggest bonus of Android TV on the Anker Nebula Capsule II is that it comes with a Chromecast built-in. This is one easy way to get past the lack of Netflix access as it will play just fine and really does make this arguably better than many other options out there.

Having the Google Assistant also adds another level of home control that you just don’t get elsewhere. Being able to dim lights and pause videos without picking up the remote is awesome and really makes this a neat inclusion. 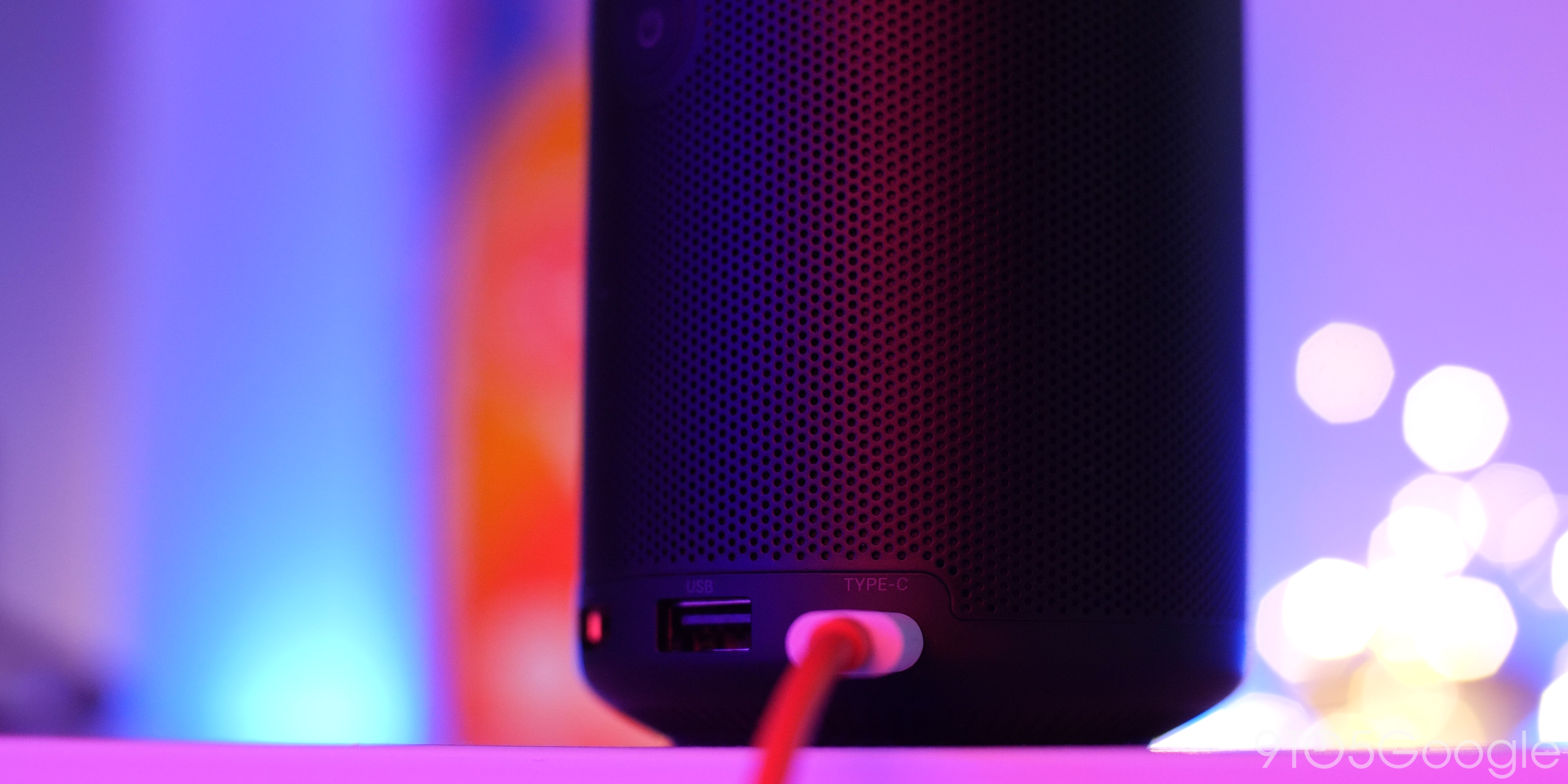 That 9,700mAh battery is a godsend when you are traveling or want to take your movies and TV on the move. When testing playing videos on YouTube, the Capsule II was able to withstand 2 hours and 45 minutes before I needed to plug in the USB Type-C charger brick. That means the Anker Nebula Capsule II can manage most movies without needing to be charged or needing to be plugged in.

As for charging, the battery took around two hours to go from zero to 100% using a fast charger. The fact that it uses a standard USB Type-C charger means that you can just use your existing power bricks too — another massive bonus. 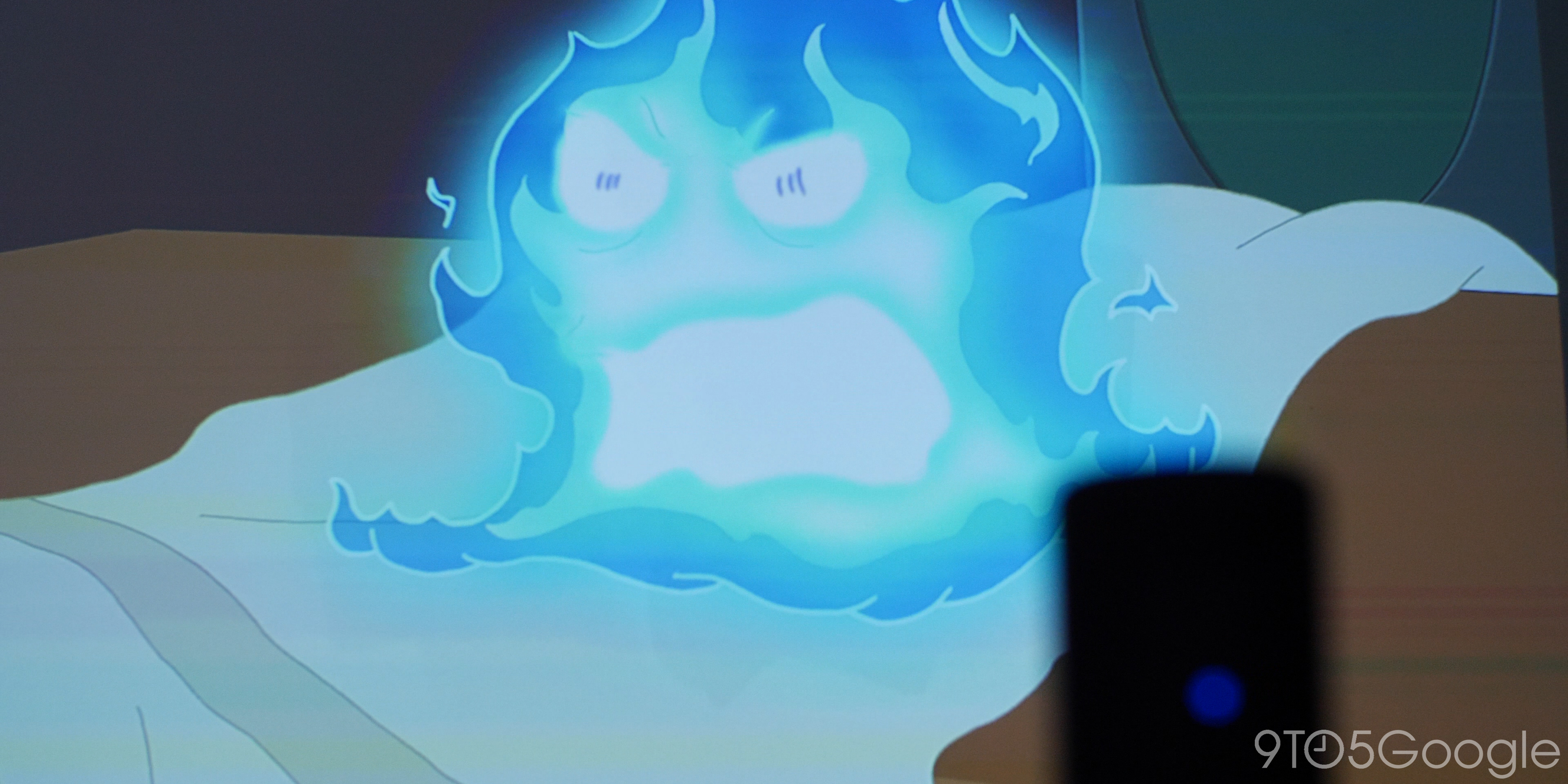 As this is a projector, after all, you might be disappointed to see that it only outputs an image at 720p. Only at that max 100-inches does it looks soft. For the most part, your projected image is sharp and clear. Some of that sharpness is definitely down to the one-second auto-focus that will initiate to work out how far your wall is away before tweaking itself to bring the image into focus.

While the Capsule II can be placed at a minimum of 23-inches or maximum of 121-inches to get a projected image from 20-100 inches, the suggested range for best results is between 40 and 80-inches away from your viewing surface. Naturally, the further the Nebula is from the surface, the fuzzier and darker your picture will appear. I will say that this does allow for a nice range of sizes depending on where you plan on viewing.

The only issue I have seen is that when faced with bright lighting in a room, it might not auto-focus quite as well as when focusing in a darkened or dimmed room. Any movement forward, backward or sideways will cause the Capsule II to re-focus again — which works really well. Luckily, if it doesn’t focus perfectly, you can make adjustments yourself using the included remote by pressing and holding the HDMI/ATV button for a few seconds.

Despite the small size, the brightness has been doubled over the previous model to 200 ANSI lumens. It does mean that in a darkened room, the Capsule II is perfect, it is acceptable in daylight but I wouldn’t suggest using it unless you can close blinds or curtains — as, naturally, this does produce the best image.

For the best experience, pointing directly at a matte white wall gives you the best image clarity. If you happen to have a projector screen, you’ll get an even better visual experience. There are plenty of affordable options if you want to install one in your home.

As I mentioned, the Capsule II includes a built-in 8-watt speaker that — given Anker’s experience in portable audio — isn’t bad at all. It delivers just enough bass to make movies, TV shows, and videogames feel immersive. It isn’t perfect though, so attaching audio via the 3.5mm output for better stereo sound might be worthwhile.

Plugging in an HDMI cable from your gaming systems will naturally net a minor delay in the video feed. For games like CS:GO, you might not want to use a projector but for casual gaming on a console you’ll notice no issues — making this perfect for Mario Kart tournaments with friends. I did find, however, that plugging in an HDMI cable did mean I had to restart the Capsule II when ready to return to Android TV.

The biggest issue with the Anker Nebula Capsule II is that for over $500 you can get a solid HD TV and a separate Android TV set-top box to go along with it. The difference here is that the form factor and portability far outweigh anything that a standard, static TV can offer.

Not being 1080p might seem disappointing as is the lack of official Netflix support. Android TV is still the best cord-cutters option for almost all media and having that in a portable package is an actual gamechanger. Having the ability to switch to a Bluetooth speaker with just a button press is a fantastic dual-purpose mode that makes the Anker Nebula Capsule II projector an excellent travel companion.

Where can I get the Anker Nebula Capsule II?