Fans and owners of the OnePlus 6 and OnePlus 6T, the wait is over as the stable Android 10 OTA update is now rolling out.

Announced over on the official OnePlus forums, OxygenOS 10.0 brings all of the Android 10 goodness and features to the OnePlus 6 series devices. As you would expect with a full Android update, it has quite the changelog. That said, there appears to be no room for the ‘Hide Notch’ option in OxygenOS 10.0 just yet — we imagine this will come in a future build though.

The fantastic Android 10 gestures tweaked by OnePlus also come to the OnePlus 6 and 6T, alongside the new Game Space, enhanced location and privacy settings plus tons more on top. It’s worth noting that this OTA update is having a staged rollout, meaning that it might not be available on your device for a few days.

At around 2GB, this is a sizeable update package so be sure to download over Wi-Fi if you’re not on an unlimited data plan. Considering that OnePlus had originally confirmed a late-November timeframe, this early drop of the biggest Android update for some time is definitely going to be welcomed by fans.

[Update 12/05]: If you#ve been waiting patiently for the Android 10 rollout to restart, we have some good news, as it has been confirmed over on the official OnePlus forums. If you’re confident enough, you can actually sideload the full stable Android 10 update by flashing the official OTA files — which OnePlus has provided.

There are also reports of people getting the OTA notification over on Reddit, with some claiming that they were able to grab the update using Oxygen Updater. 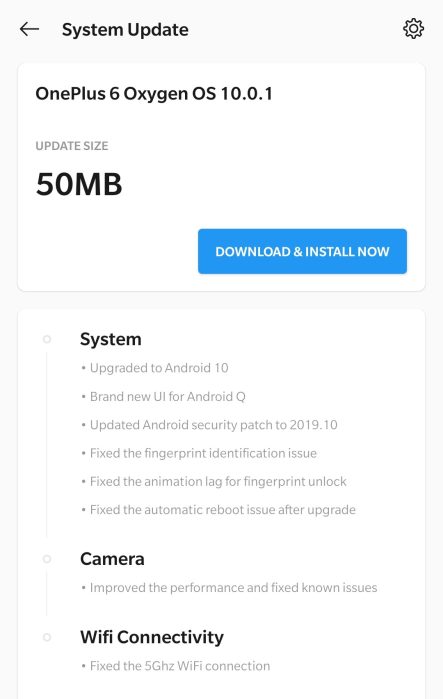 The process is simple enough, just download your appropriate .zip file, move it to from your Downloads folder the root of your internal storage. Then navigate to Settings > System update > Settings > Local upgrade and select the Android 10 .zip file. A reboot and system restart will give you all of the goodness of Android 10 on your OnePlus 6/6T.

For those wondering, OxygenOS 10.0.1 for the OnePlus 6/6T also has a slightly different changelog, which you can see below:

OxygenOS 10.0.1 based upon Android 10 update changelog

[Update 11/25]: It turns out that the OnePlus 6/6T Android 10 update was paused completely due to some consistent issues, but is set to restart sometime “next week.” OnePlus confirmed that the new Android 10 build is awaiting CTS approval and will be heading out from next week once approval has been confirmed.

For OnePlus 6/6T users, your patience is much appreciated. There’s a build waiting for CTS approval, and hopefully you can start receiving the update from next week on (if CTS is passed).

So while we can’t give you an exact date, we are hoping that you’ll have a fully working Android 10 build on your OnePlus 6/6T in time for the holidays.

[Update 11/04]: OnePlus has confirmed that the fingerprint issues should have been resolved and the rollout of Android 10 for the OnePlus 6 is now starting again. That means that it should begin heading out later today — again, in incremental waves. It’s worth noting that there still may be minor issues, hence the smaller rollout phase.

[Update 11/02]: So we have some bad news, OnePlus has confirmed that a fingerprint scanner issue is causing some issues with the Android 10 OTA for the OnePlus 6 specifically. They have therefore paused the update until further notice for the OnePlus 6 while a fix is prepared. Stay tuned for a further update in the comings days.

Of course, with a limited rollout you may be wondering how to get Android 10 on your OnePlus 6 or 6T right now. The fantastic Oxygen Updater already has the OTA file if you are happy to sideload using that method. We’re also seeing some users on Reddit gain the update by connecting to a VPN and setting their network location to Germany — your mileage may vary though.

If you’ve managed to get the update on your OnePlus 6 or 6T, let us know down in the comments section below how you’re getting on.