At its launch on Android last year, Fortnite could not be installed by simply going to the Play Store. It still can’t be; the battle royale game has to be downloaded directly from Epic Games and then sideloaded. Among other reasons, this is due to the developer not wanting to give Google its mandated 30% cut of lucrative in-app purchase revenue. Epic Games is now hoping for a special exception to that rule.

According to sources familiar with the matter, Epic is imminently planning to submit Fortnite to Google for availability through the Play Store using its own payments platform. If Google were to approve the app, it would be more or less identical to the version Android players are using today.

Notably, the game would leverage Epic’s current purchasing system to buy “V-Bucks.” That virtual currency allows players to acquire very popular in-game outfits, pickaxes, wraps, emotes, and more. It involves entering a credit or debit card directly, and sees the Fortnite developer earn 100% of the transaction. As the game costs nothing to download, this is Epic’s revenue stream.

Epic using its own payment method would be in violation of Google’s policy that “developers offering products within a game downloaded on Google Play… must use Google Play In-app Billing as the method of payment.” On mobile, Apple’s App Store and Google Play have historically taken a 30% cut on purchases as “operating fees,” though both in recent years have acquiesced and are taking a smaller portion of recurring subscriptions.

Update 12/9: Epic has confirmed to us that it plans to submit Fortnite “shortly,” and hopes that a “general” exception is widely applied as part of broader industry change. CEO Tim Sweeney lays out a case against the “tying of a mandatory payment service.”

Epic doesn’t seek a special exception for ourselves; rather we expect to see a general change to smartphone industry practices in this regard.

We have asked that Google not enforce its publicly stated expectation that products distributed through Google Play use Google’s payment service for in-app purchase. We believe this form of tying of a mandatory payment service with a 30% fee is illegal in the case of a distribution platform with over 50% market share.

We note that Google Play’s Developer Distribution Agreement (https://play.google.com/about/developer-distribution-agreement.html) does not require developers use Google payments. It merely references a number of non-contractual documents asking developers to do so.

Further, Epic operates a major PC storefront and payment service and we do not force developers using our store to use our payment ecosystem.

It’s unclear whether Google will grant an exception to Epic as that would likely cause other third-party services to request similar exemptions. On average, it takes the Google three days to review apps from new developers.

Update: In a statement this evening, Google suggests that it will not provide Epic and Fornite an exception as it expects all developers to “participate under the same terms.” The company also defends that 30% cut as allowing for investment back into its platform and tools.

“Android enables multiple app stores and choices for developers to distribute apps. Google Play has a business model and billing policy that allow us to invest in our platform and tools to help developers build successful businesses while keeping users safe. We welcome any developer that recognizes the value of Google Play and expect them to participate under the same terms as other developers.”

Epic last year cited Google’s in-app purchase policies as being one of two reasons it opted to launch outside of Google Play on Android. CEO Tim Sweeney described it as a tax for mobile gaming and a “high cost” that makes development and running games difficult — the other rationale being that it wanted a “direct relationship” with customers. 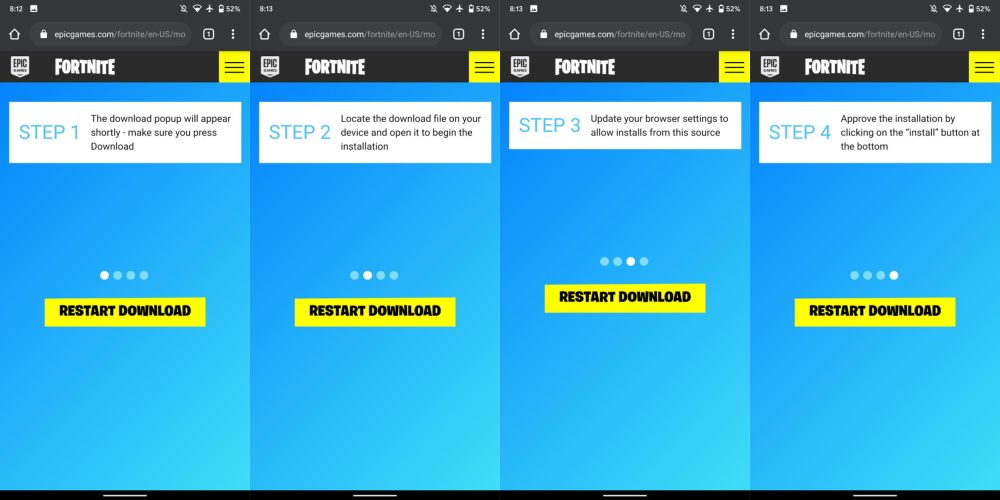 As a result, Epic Games is hoping to bypass the requirement that apps distributed through Play use the Play Billing Library. Conversely, on iPhones and iPads, given there’s no other way to distribute apps, Epic presumably gives Apple its 30% cut on all transactions.

For Apple and Google’s parts, their billing systems provide a consistent purchasing experience for their over a billion users, which offers both practical and security-related benefits. Users needing to enter a credit card for each app would be a tedious experience, and would also increase the likelihood of one of those interactions being malicious.

In early August 2018, Fortnite first became available for Android in beta, but only for Samsung devices. Initially, it was available on the Galaxy Apps store before the Fortnite Installer — and later Epic Games app — became available for all other devices. The Epic Games app recently gained its second game — Battle Breakers — which can also be installed through the app alongside Fortnite.

This sideloading method was criticized by the security community on multiple fronts. In fact, shortly after the game’s launch last year, Google found a vulnerability related to the outside install method. That flaw with the Installer allowed a malicious app to commandeer a download of “Fortnite” to be any other file on the web.

Also, while visiting fortnite.com/android to get the official download is relatively straightforward, malicious versions of the APK required to get Fortnite quickly emerged to confuse prospective players. Even on the Play Store, there are games that clearly intend to masquerade as Fortnite through similar names and app icons.

The real precipice of the issue is that these apps have users enable a security setting which permits unknown apps to be installed. This allows other malicious downloads to make their way on to phones and tablets. In response, Fortnite after launch added a reminder to change back the preference in Chrome in order to “make your device as secure as possible.”

We’ve reached out to Epic for a comment and are still awaiting a reply.