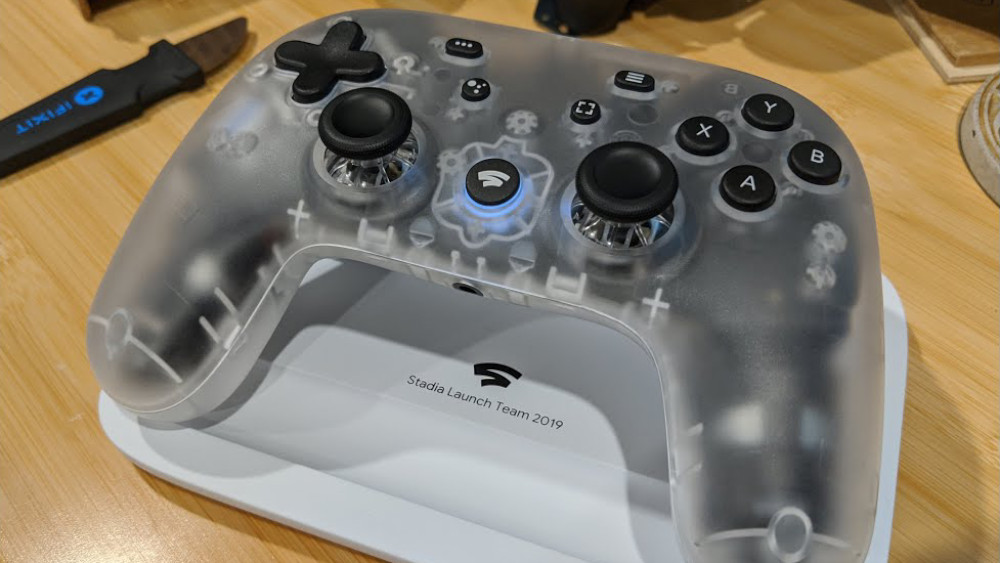 As of today, you can buy the Google Stadia controller in one of three colors, Clearly White, Just Black, and Wasabi — a lineup closely resembling that of a Pixel phone — with a fourth color, Night Blue, exclusively available to Stadia Founder’s Edition purchasers. Since launch, gamers have been dreaming of other color schemes and designs for the Stadia Controller, with Google even running an official competition to pick the best fantasy design.

However, today, we’re learning from a Googler’s personal video that Google actually made an official fifth color for the Stadia Controller. As a reward to those who worked tirelessly on Google Stadia’s launch day, the company crafted a special one-off batch of controllers made almost entirely with transparent plastic.

As a gift to all the team members working hard on Stadia through launch day, everyone received a one-of-a-kind, limited edition, never to be made again, clear Stadia controller. It was an awesome piece of launch schwag and has great sentimental value.

Unfortunately, for whatever reason, these controllers were “deactivated” before being given out, meaning they were gutted of important parts like the rumble motor, the battery, and the internal cable that connects to the buttons.

Unphased, Stadia’s UI engineering lead John McDole instead took this lifeless controller as a challenge. Carefully prying open the transparent case and gutting another one of his personal controllers, McDole was able to create easily the coolest Stadia Controller currently in existence.

All in all, this is a fantastic throwback to a time when transparent controllers and Gameboys were all the rage. As these were developed exclusively for the Google Stadia launch team, it’s very unlikely that we’ll ever see a clear Stadia Controller reach store shelves, but it’s fun to imagine.