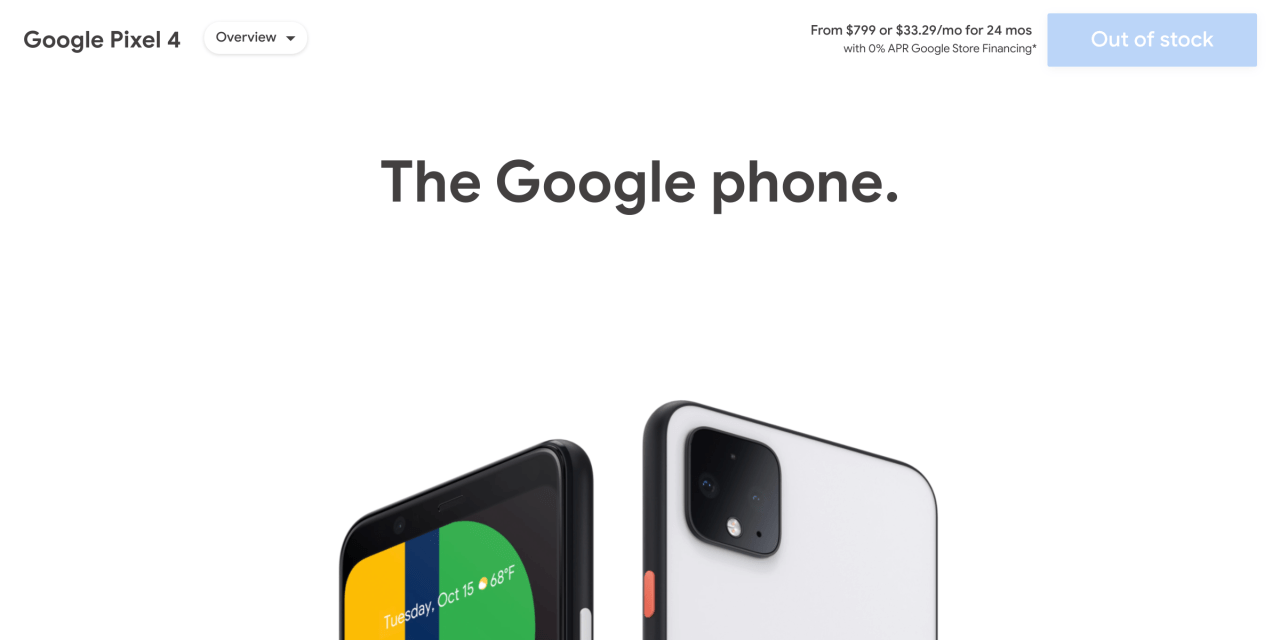 At the start of July, Google discontinued the Pixel 3a after inventory ran out on its official store. After announcing its latest mid-range phone on Monday, the flagship Pixel 4 and Pixel 4 XL is now discontinued and out of stock on the Google Store.

Update: Google confirmed to us that it has discontinued the Pixel 4 line. It will no longer be sold on the Google Store, though it will be available from other retailers while supplies last. The company reiterates that the phones will receive OS and monthly security updates until October 2022.

“Google Store has sold through its inventory and completed sales of Pixel 4|4XL. For people who are still interested in buying Pixel 4|4XL, the product is available from some partners while supplies last. Just like all Pixel devices, Pixel 4 will continue to get software and security updates for at least 3 years from when the device first became available on the Google Store in the US.”

This departure — only 9.5 months after release — is highly uncharacteristic as the replacement hasn’t been fully detailed yet. More about the Pixel 5 is expected this fall, while we just reported on a possible pre-order date. With the Pixel 4a not launching in the US until August 20th, this means you cannot buy a Pixel phone directly from Google for the next two weeks.

While Google has never revealed sales figures for its devices, there were signs of lower Pixel 4 adoption and interest. Historically, last year’s flagship is usually available (and heavily discounted) for several months after the new phone launches to clear inventory. From April 12th to May 9th, the Google Store offered a hefty $300 discount that brought the starting price of the phone to $499.

As of Wednesday evening, the Pixel 4 is listed as being “Out of stock” in the US store. The config page reflects that status as well for Verizon, Unlocked, and Google Fi units. Google Stores abroad still have the device on sale, but many variants are sold out.

Meanwhile, Google’s MVNO website no longer even lists the Pixel 4 or Pixel 4 XL. It’s still available at third-party retailers and carriers, but stock is dwindling.

The smaller phone has a 5.7-inch display and 2,800 mAh battery that was criticized for being too small given the 90Hz Smooth Display. Meanwhile, the 6.3-inch 4 XL rocks a 3,700 mAh battery.

Another first is the jump to a dual-camera array. The 12.2 MP main sensor is paired with a 16MP telephoto, bucking the trend of other manufacturers opting for wide-angle lenses.

Instead of a standard fingerprint sensor, Google opted for IR-based face unlock that also takes advantage of Soli to speed up detection. This radar sensor has been in development for the past several years, but the Advanced Technology and Projects group finally miniaturized the chip. It is used for hand gestures and turning off the always-on display when you’re not near the Pixel 4.