Pixel 5 and 4a 5G rumors: Everything we know about the next Google phones [Video] 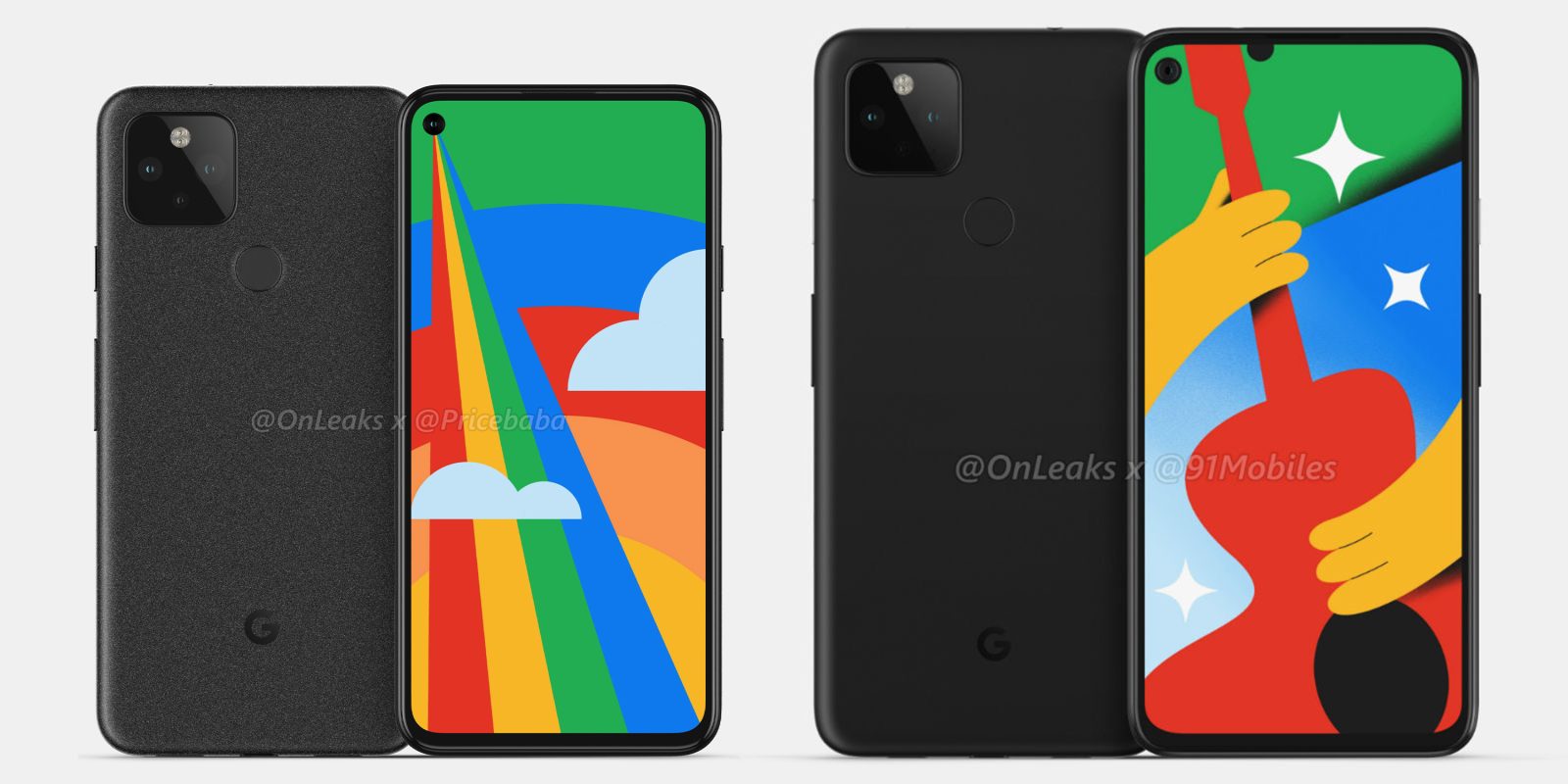 As we have seen with almost all recent Google hardware, plenty of tidbits, information, and images have leaked well ahead of launch. We’ve been sifting through the growing pile of Google Pixel 5 and Pixel 4a 5G rumors in an attempt to better separate fact from fiction.

We’ve known for quite some time that the Pixel 5 would be markedly different from previous “flagship” Google Pixel hardware. Our team found evidence that felt like a hard pill to swallow for some fans, while it garnered questions as to what the strategy is for the late-2020 Pixel cohort. Google is aiming for the iPhone XR, 11, and iPhone 12 crowd with a more “modest” package that has everything most people would wish for.

Some of you were looking to upgrade or were simply keeping an eye on the rumors as to what the Pixel 5 — and subsequently the Pixel 4a 5G — would bring to the table. With a delay in the launch of the second “a” series Pixel, the 4a 5G will be a weird secondary option to the more “premium” Pixel 5. It’s a weird mixed launch that is as confusing as you might already think.

I/O 2020 was skipped in favor of an online event, which then in turn pushed back the 4a launch. We’re expecting another “virtual” Made by Google launch event. Heck, even a quiet launch might be on the cards — who knows at this stage of 2020?

While the Pixel 4a is most definitely an ideal smartphone for plenty of people, we’d wager that given the rumors and what we know already about the Pixel 4a 5G and Pixel 5, a ton of people are interested in what these “new look” late-2020 Pixel “flagships” bring to the table. Working out Google’s playbook on this one has proved to be so much harder than in recent years, though.

Where would we be at this stage of 2020 without some Google Pixel 5 and 4a 5G leaks? Renders appeared online nice and early this year, but it was a while before they were substantiated by those with the track record to give them real weight. The design will follow a similar path to the Pixel 4a but with a twist of the previous Pixel 4 design at the rear.

Early rumors suggested that we would see a Pixel 5 and Pixel 5 XL. Those have turned out to be false. There will be no XL model this time around. It looks as though the Pixel 4a 5G is a sort-of hybrid of what might have been the Pixel 4a XL and the Pixel 5 XL, but with a far cheaper build akin to the 4a. The Pixel 5 is the slightly more “premium” of the duo. In smartphone terms, that will actually mean less durable materials and likely a “heavier” aesthetic — plus some potential extra internal hardware tech.

In terms of size, the Pixel 5 is rumored to measure in at 6 inches, while the Pixel 4a 5G will come with a 6.2-inch display. As we mention, the design fuses old and new with a unibody that is expected to be plastic for the Pixel 4a 5G. However, the Pixel 5 unibody is unknown, but some early leaks suggest it too could be plastic. The boxy aesthetic adopted by the Pixel 4 is gone in favor of rounded, bubbly corners and far softer curves.

As there is no Soli radar tech or 3D Face Unlock coming this year, Google has decided to go for an “all-screen” design at the front that takes advantage of an upper-left punch-hole notch. This will create a uniform look from the 4a right through to the 5, helping to fully distinguish these devices from their predecessors.

Don’t go getting your hopes up for some of the core features that made the Pixel 4 and 4 XL, as Soli and Face Unlock tech simply won’t be coming to the Pixel 4a 5G and Pixel 5. However, there will be a return of the rear fingerprint scanner, plus the headphone port on the 4a 5G.

Rumors also suggest that the Pixel 5 will include some more “premium” features including wireless charging and — for the first time on a Google device — reverse wireless charging. This will be a neat addition if you want to top up your Pixel Buds or other wireless earbuds. We’re hearing that this will be capped at 5W, meaning that most accessories should draw enough power. Charging a smartphone might be possible over several hours, but it will likely not be worth trying.

Pixel 5 and 4a 5G specs rumors

Earlier this year our own Kyle Bradshaw speculated — based upon some serious digging within the Google Camera app — about a potential mid-range Pixel 5. Naturally, some people didn’t really want to hear that Google might shift focus from high-end internals in favor of more “modest” hardware. If you wanted an out-and-out rival to the likes of the Galaxy S20 or the Note 20, then we’re very sorry, but you will leave disappointed.

It turns out that based upon all the rumors and tidbits of information, the Pixel 5 will come packing the Qualcomm Snapdragon 765G 5G-enabled chipset. In terms of raw benchmarks, the chipset actually doesn’t quite match the Pixel 4 and 4 XL’s Qualcomm Snapdragon 855. However, it does include 5G connectivity without the associated price premium.

Thanks to a detailed leak, the entire specification sheet for both the Pixel 4a 5G and Pixel 5 has been shared, with some notable differences between the two devices. That said, somewhat confusingly, the Pixel 4a 5G will also come with the same chipset, which means that performance should more or less be identical out of the box.

Data hoarders will also be pleased to hear that thanks to recent Pixel “5s” leaks, the base storage could match that of the Pixel 4a. That means a potential 128GB base storage, which is ideal if you plan on installing a bucketload of apps, taking plenty of photos, or even recording a ton of 4K video.

Battery capacities and longevity has been a notable problem with Pixel hardware in recent years. This time around Google has clearly decided to put this to rest by slapping a 4,000mAh battery in the premium Pixel 5. The Pixel 4a 5G will come with a 3,800mAh cell according to leaks. We’d also imagine that only the Pixel 5 will support wireless charging, with both devices likely supporting Google’s 18W fast charging standard.

The dream of the triple camera setup on a Pixel device is still yet to be realized, but at least in 2020, Google is listening to the critics. At the rear, there will be a slight reshuffle of the dual-camera setup.

Say goodbye to the 2x telephoto zoom lens in favor of a standard main sensor and ultra-wide-angle lens. It’s clear that Google wants to offer the zoom capabilities with the Super Res Zoom post-processing rather than hardware – which is a shame. We’d really love to see a periscope zoom lens on a future Pixel, but Super Res Zoom does manage to hold up really well, given it’s mostly software.

Now for the nitty-gritty, as per the rumors, it looks a though the Pixel 4a 5G and Pixel 5 will come with the very same 12.2-megapixel Sony IMX 363 sensor as we’ve seen for quite a while now. This might disappointing given the fact that we’re seeing even higher-resolution sensors hitting the market, but given the prowess of Google’s camera software processing team — and the recent tidbits from former head Mark Levoy — software is clearly key in the camera equation here.

We’re expecting the selfie camera to come with the same 8-megapixel sensor that we have become accustomed to. That should mean the Pixel 4a 5G and Pixel 5 pack in the Sony IMX 520 at the front, for detailed, crisp selfies and video at up to 1080p.

With most Pixel devices coming with the same camera sensors, performance – and likely software updates – are consistent. The contrasty look that has become a signature image profile is one that very few smartphones can match, even with far superior hardware on offer.

Rumors and our own digging also strongly suggest that some enhanced camera features will come to the Pixel 5 at the very least this time around. Motion blur has been hinted at in the code of Google Camera 7.5 alongside Audio Zoom, the latter of which might rely on some hardware exclusive to the upcoming generation of Pixel devices for better sound isolation when recording video.

What other camera software tweaks can we expect? Well, Google could have some secrets up its large sleeves, but we’d wager it will be all down to enhanced or improved processing rather than anything “new” in the traditional sense.

We have confirmation through Google of a couple of the colors of the Pixel 4a 5G and Pixel 5. There are rumors of a green Pixel 5, but leaks have not surfaced showcasing this upcoming design. The Pixel 4a 5G will be available in black and white, with the Pixel 5 expected to come in the aforementioned green and black options.

One would expect that this proposed green Pixel 5 will follow the traditional Googlified take on the color. We’ve seen some interesting takes from the firm with regard to colors. They tend to be more playful than other OEMs, and we hope that trend continues with the upcoming hardware. Also, expect some cute naming, too.

Thanks to a leak by the French Google Pixel blog, a pre-order date was hinted at when the Google Pixel 4a was quietly unveiled. October 8, 2020, was the pre-order date mentioned within the original announcement post. This was soon removed, but not before the cat was well and truly let out of the bag.

The “Launch Night In” will be a showcase for all of the upcoming hardware including the Pixel 4a 5G, the Pixel 5, plus the new Chromecast, and Nest speaker devices. You’ll want to tune in to a public livestream (in lieu of a physical event due to COVID-19) at 11 a.m. PT on September 30.

The aforementioned Pixel 4a announcement also teased the pricing for this upcoming duo, which is set to start at $499. Our own information has the Pixel 5 rumored to start closer to $699, which would be below the standard Pixel 4 retail price of $799 and way below the Pixel 4 XL’s $899 initial retail pricing.

What the Pixel 5 and 4a 5G won’t include

Somewhat thankfully, the removal of Face Unlock means the return of Pixel Imprint. When most of the globe has now adopted masks as an everyday garment, this has proved to be a really important design decision that Google may not have foreseen.

That said, Face Unlock will be sorely missed. Let’s hope it does come back in a future model alongside a fingerprint reader, for even more end-user choice on secure locks and unlocks.

This time around Google is straight-up dropping the Soli radar tech and slightly gimmicky hands-free controls that were included on the Pixel 4 and 4 XL. Does that mean we’ll see Soli again? It doesn’t bode well for the experimental tech. If you enjoyed controlling your device music players without needing to touch the display, then you’ll go back to actual on-screen controls from now on.

What are you hoping to see from the Pixel 5 and Pixel 4a 5G?

We want to open up the floor to you: What beyond the leaks and even including the leaks would you like to see come launch day? We are now on a countdown to the as-yet-unknown release to get to see the Pixel 4a in the flesh for the first time.