Google Pixel 4 vs Pixel 5: Worth the upgrade? [Video] 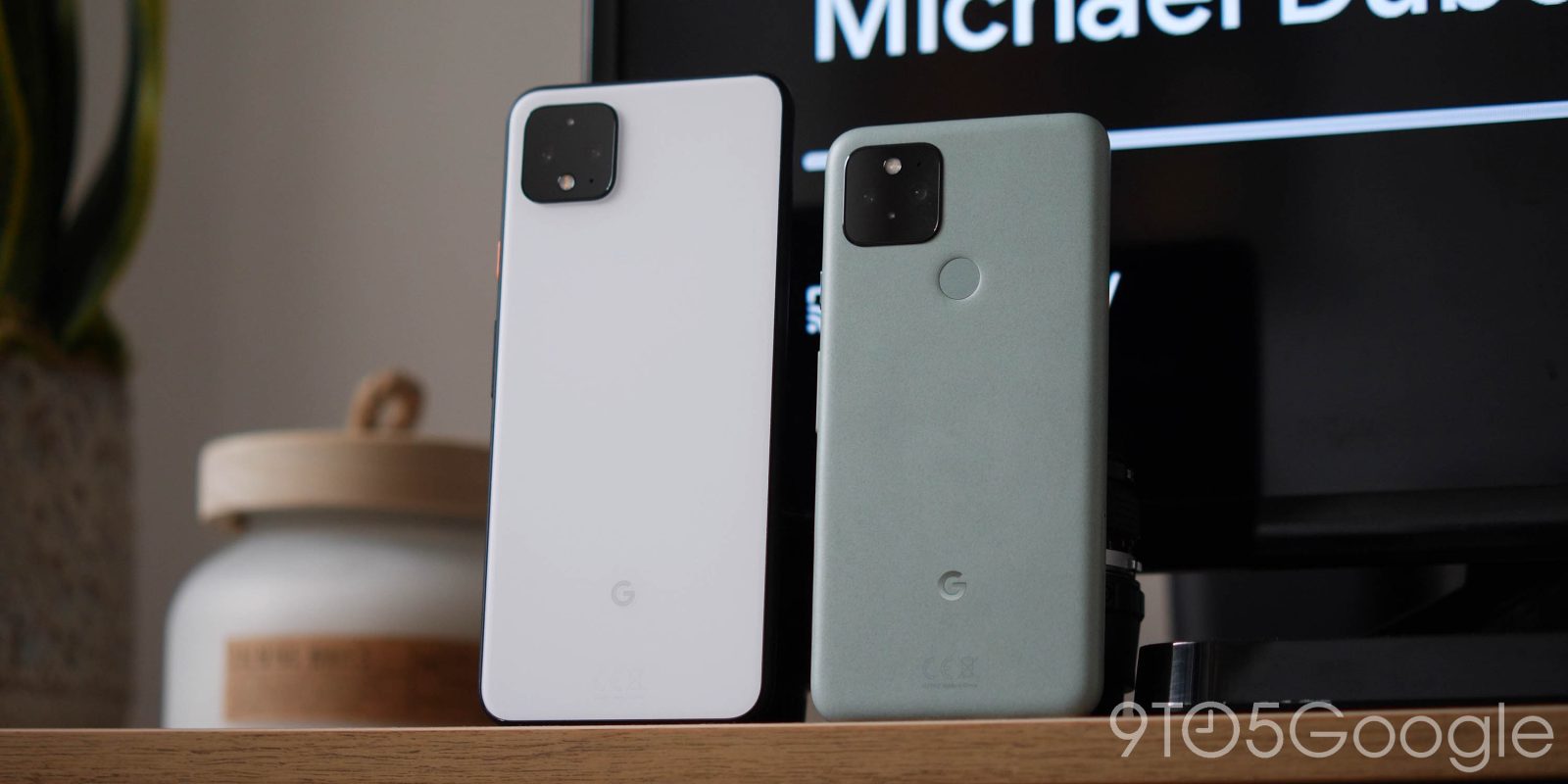 It seems ridiculous to be even suggesting that after 12 months, someone “should” upgrade from the Pixel 4 to the Pixel 5, but we’re here to examine whether this is a thought you might be having.

2020 is a very different year for Pixel fans, as there is no real out-and-out flagship smartphone to go out and pick up. Google’s focus this year has been on building a device that resolves some of the glaring errors of past devices, then backing it with the best possible software experience.

This might mean that if you are the owner of an older Pixel device, you’re confused. Heck, there are plenty of Pixel 4 owners that might have been hoping to switch to a new smartphone if issues were becoming too much of an everyday burden. Unfortunately, Google’s numerous hardware slip-ups and sometimes lax quality control mean that no two Pixel devices have been the same.

You might have the Pixel 4 and are looking at the Pixel 5 confused as to whether switching to the newer model is worthwhile. To make things a little easier, we’re going to guide you through the differences between the late-2019 flagships and the solo 2020 flagship Google Pixel:

Video — Google Pixel 4 vs Pixel 5: Worth the upgrade?

The tale of the tape

From a sheer benchmark perspective, the Pixel 4 has better internals than the Pixel 5. It has a better screen, faster chipset (albeit 4G-only), Face Unlock, and two distinct sizes to choose from. Here are the respective core spec sheets:

So to summarize, the Pixel 4 has more hardware options, but with just one SKU, the Pixel 5 is harder to confuse. The newer device also has more RAM, which might prove useful for added longevity but does have a chipset that — on paper — matches that of the Pixel 3 series.

If you want the objectively “best” specifications, then the Pixel 4 and 4 XL actually offer more powerful hardware out of the box. Granted, the Pixel series is still more software-bound than many others. The removal of some sensors and the Soli radar tech might also come as a disappointment to some people, even with some half-baked software implementation for the impressive tech.

Design is a bit more subjective, but the Pixel 4 does feel more “premium” with its frosted glass finish on the Clearly White and Oh So Orange models. The bio-resin covering over the aluminum chassis of the Pixel 5 means it feels very different from glass.

You’ll also have to contend with different haptics on the late-2020 Pixel. While they are great, the Pixel 4’s haptics are vastly superior. The speakers are also marginally better on the Pixel 4, as it had a more “normal” stereo speaker setup that utilizes a downward-firing tweeter and the earpiece. The Pixel 5 uses a familiar downward-firing tweeter and the vibrating portion of the display in place of a “traditional” earpiece. The sound profile for the Pixel 4 and Pixel 5 happen to be almost identical, but the Pixel 4 reaches a slightly higher max volume.

It’s wrong to say the software is “exactly” the same on the Pixel 4 and 4 XL as it is on the Pixel 5, as that is not strictly true. The core OS is the same, yes, but the Pixel 5 has a few neat tricks up its sleeve that, at present, are not available to older Pixel hardware — although may come in future Pixel Feature Drops and OS upgrades.

Although running effectively the same version of Android, it’s also worth noting that because the Pixel 4 series shipped with Android 10 and has had one full OS upgrade, it is only eligible for upgrades up to and including Android 13. Conversely, the Pixel 5 will be updated until at least Android 14 at which point support for the Pixel 4 will have already ended.

It’s not as clear cut in software terms, as certain features will not be available on either device due to minor hardware differences. However, the core daily experience on the Pixel 4 series and Pixel 5 will be pretty much identical. Gaming is one area where the Pixel 4 is far more capable thanks to the Adreno 640 versus the Adreno 620 in the Pixel 5.

This is an area where the Pixel 5 is a clear winner. Credit where it is due, though, Google has seriously improved the daily battery longevity of the Pixel 4 series (specifically the XL variant) with software updates and the recent Android 11 upgrade.

A combination of a larger battery, lower resolution, and marginally more efficient processor results in borderline exceptional daily lifespan on the Pixel 5. We know that this is one of the core complaints of the Pixel 4 series, so if long battery life is essential to you, this is one of the few areas an upgrade does make a lot of sense.

Both devices come with 18W wired fast charging, plus wireless charging. The Pixel does include reverse wireless charging for the first time, too, which is especially handy for accessories such as Bluetooth earbuds or even if you need to give a friend or family member a bit of extra juice. It is limited to just 5W, though, which actually matches the top Qi charging speeds of the Pixel 3 series.

A tale of two focal lengths

The Pixel 4 series camera setup is actually quite a bit different from that of the Pixel 5. Both devices rely on the same 3-year-old 12.2-megapixel Sony IMX 363 camera sensor, but it’s the secondary lens where the changes are pronounced.

This telephoto zoom lens is also backed by Super Res Zoom for more enhanced zoom shots at up to 8x. This is achieved by a physical 2x zoom and then software enhanced for marked improvements over the Pixel 5.

While there are some hardware variations, the Pixel 5 comes with some notable software features that are not available on the older Pixel 4 series. The Pixel 4 does still include the popular Playground AR feature though, which is not available on devices released since the Pixel 4a.

Processing time for images is marginally quicker on the Pixel 4, as the Pixel 5 lacks the Pixel Neural Core chip. This is noticeable, but it isn’t a major inhibitor to photography and videography, as processing can take place in the background without you ever really noticing. Save the new features, the camera experience is almost identical on both devices with the main sensor. Images can be ever so slightly better on the Pixel 5 but not by a large margin.

Pixel 4 vs Pixel 5: Should you upgrade?

Probably not a massive upgrade

If you are happy with the Pixel 4, then no, you should not upgrade to the Pixel 5. While there are some benefits such as 5G and improved battery life, the actual package on offer compares very well. Again, we’ll reiterate that upgrading every single year is not cost-effective, nor is it good for the planet. The Pixel 4 and 4 XL are still fantastic devices that have improved hugely since release thanks to software enhancements and Pixel Feature Drops.

Unless you must have an ultra-wide-angle, 5G connectivity, or have severe battery issues, then it simply is not worth swapping out your handset in favor of a less powerful Pixel. You may have seen our own review of the Pixel 5, suggesting that while there are compromises, it offers a fantastic Pixel experience without the marginally higher price tag.

Those of you with the OG Pixel, Pixel 2, or Pixel 3 are far better off with an upgrade as you will see the biggest improvements and performance gains. This fits more in line with the two-year upgrade cycle that we’d usually suggest people stick to for the most gains — although the longer you can hold out, the better!

Where can I get the best deal on the Pixel 5?

Are you insistent on getting the Pixel 5? If so, the Pixel 5 is available for $100 off from Best Buy with activation. Verizon is offering the Pixel 5 with up to $550 off with select device trade-ins or up to $150 with select plans with a free $250 Verizon gift card. Otherwise, ahead of Black Friday, the Pixel 5 retails for $699 in the US and can be purchased directly from Google, Amazon, Best Buy, Verizon, B&HPhoto, AT&T, plus more.

Alternatively, if you would prefer the Google Pixel 4, it starts at just $370 for a renewed model at Amazon, with the Pixel 4 XL starting at $470.