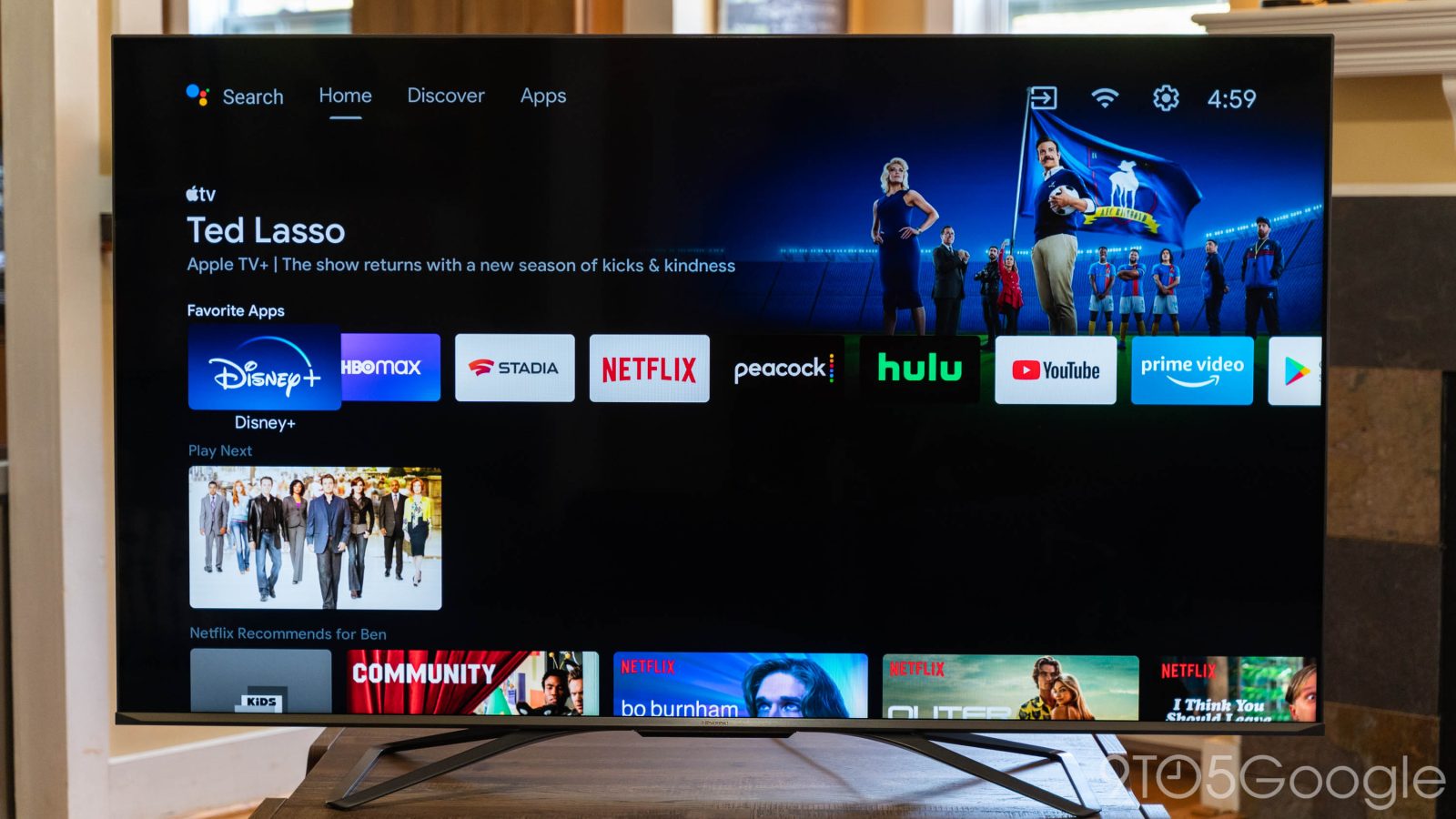 As Google’s Android TV platform continues to expand, the TVs running it are only getting better. For the past couple of months, I’ve been using the Hisense U8G that runs Android TV with a great display, and importantly, much better software performance than I expected.

Display & hardware: In a word, excellent

Before we look at anything else, let’s take a look at the most important part of any TV purchase — the display panel itself. My review unit of the Hisense U8G was the 65-inch model that retails for $1,249 in the United States, sold at Best Buy. There’s also a 55-inch model that starts at $999.

The short story is that, as far as an LED panel goes, I’m incredibly impressed at what Hisense has to offer on this TV. The 4K panel is extremely sharp and has very deep blacks that leads to some killer HDR.

My usage was primarily in a bedroom, where the TV was mostly used in the dark but had to put up with direct reflections from windows at the back of the room. Even using it in the middle of the day, brightness was perfectly suitable and everything looks fantastic. If you are using the U8G in a particularly dark room, you’ll almost certainly notice just how excellent the deep blacks are. The preset out of the box, too, was well calibrated and offered up a pleasing color tone. I turned off motion smoothing, but that was the only tweak I felt was needed to fully enjoy the panel. As a result of the location where I tested, viewing angles didn’t present much of an issue, but I definitely noticed a slight downgrade when looking at the TV from any sharp angle. For most scenarios, though, I think most people will be completely happy with the viewing area. This felt like a huge step up from the comparably priced Vizio TV that’s been in my living room for the past three years.

For a more in-depth look at what this panel brings to the table, I’d recommend taking a look at this analysis from RTings.com that gave the Hisense U8G an overall score of 8.4 with no major categories scoring below 8.0. I fully agree with their analysis on the quality. The highest praise I, and I think any reviewer, can give is to say that a product tempted a purchase, and that’s something I felt on several occasions throughout testing for the quality of the display alone.

Plugging into the display, you’ll get four HDMI ports that all handle HDMI 2.0, with ports 3 and 4 managing the better 2.1 bandwidth that is useful for next-gen consoles. This isn’t something I tested, as I don’t have these newer consoles. However, other analyses have confirmed support for 120Hz HDR gameplay using the PS5 and Xbox Series X. The ports situation also includes two USB 3.0 ports, optical audio, 3.5mm headphone jack, composite in (with an included adapter), cable, and ethernet. On a side note, I also loved Hisense’s built-in cable management channel and “holsters.” They would make wall-mounting a breeze!

Sound: As good as you’ll get outside of a soundbar

Another standout for me on the Hisense U8G was the sound quality, surprisingly. While a good soundbar will eclipse the quality put out by the TV’s onboard speakers, they’re honestly pretty great in a pinch.

You’ll get sound quality that easily fills a small-ish room and gets shockingly loud, too. It’s more than sufficient for content focused on dialogue, but does underwhelm slightly for something like a Marvel show. While I enjoyed watching many shows on this TV and actually preferred the picture quality to my actual home theater, when it came time to enjoy Black Widow recently I went straight to the living room to use my full surround sound offering, as I knew the TV’s speakers wouldn’t fully deliver.

That’s because the only area the package really falls on its face is, obviously, the low ends and bass. Both aspects suffer from the thinness of the panel, as they do on virtually all modern TVs. I’d never recommend that someone buy a TV based on its sound quality, but this is a TV where, if you’re in the market, you can probably wait a bit before buying a soundbar or other system if you need to save up a few more bucks.

Performance: matches, or beats any other Android TV

My main focus on the Hisense U8G came down to performance, and right from the beginning, I was very impressed with how well this TV handles the platform.

Coming from primarily using Chromecast with Google TV in recent months, the U8G felt like night and day. The TV is very responsive with smooth animations, quick app loading times, and virtually zero hiccups. This is surely due in part to the less resource-intensive nature of the standard Android TV experience, but it’s also a sign of the raw performance being better overall. The experience I had with an older Hisense model, the H9F, was completely the opposite.

Why, though, is good performance so important on an Android TV? Beyond just making the experience feel better on the whole, ensuring good performance also means that you’re getting more longevity out of the panel. The display on any TV will outlast the software on board, but with some headway in the performance department, I’d wager the Hisense U8G will last at least the majority of its usable lifespan before you need to use an HDMI device to have a reliable software experience. This speedy performance extended to virtually every app, from YouTube to Netflix to Stadia and HBO Max. They all performed without any notable issues, which is something I rarely get to say about Android TV devices that aren’t the Nvidia Shield and it’s certainly something I didn’t expect to say about an actual television with the OS built in.

Speaking of apps, I’m happy to say that every major service works just fine. Netflix and Prime Video, which require special certifications beyond just the Play Store, both work just fine and there are no complaints outside of those either. Problematic apps, like HBO Max, Peacock, and Hulu, all runs flawlessly and Disney+ runs smoothly while triggering Dolby Vision HDR reliably every single time. Hisense includes a few of its own apps, too, but the only one you might use is the browser. It certainly works, but it’s very slow and not all that user-friendly.

In terms of storage, a little over 8GB are accessible. Once I had all of my apps installed and had used them for about a month, I still had over 5GB available to me. It’s not a generous amount, but it’s plenty for a TV. The pair of USB ports on the back, too, leave room for storage expansion.

As far as what the future holds with Hisense and Android TV, it’s not a bad picture. The company is, at least for now, sticking with the Android TV experience over Google TV; a perfectly acceptable decision. But updates may end up being a bit of a sore point. While Hisense has a track record of providing updates for its TVs, they’re not exactly timely or long-lasting. The Hisense U8G ships with Android TV 10 and, at the most, I’d expect one major Android update and a couple of security patches per year over the product’s active life cycle.

Remote: It has a shortcut button, enough said

Rounding out the experience, let’s touch on the remote control. Hisense includes a pretty no-frills black plastic remote with the U8G. The design isn’t anything to get excited about, but it’s comfortable in the hand and the buttons are tactile without making any noise when pressed. The keys will light up when pressed, which is useful in a dark room, but it would be nice if the backlight turned on before you pressed anything.

The layout, too, is pretty simple and easy to use. Starting from the top there are power and input controls as well as a button that opens a virtual number pad for apps that rely on that input.

There’s a sizeable D-Pad for navigation with back and home buttons underneath. There are separate rockers for volume and channels, the latter you’ll likely only use if you hook up a cable tuner. There are also dedicated play/pause and fast forward/rewind keys, something I always love to see on Android TV remotes.

Hisense also includes a big Google Assistant button up at the top which works well, though relies on pairing the remote through Bluetooth to work. This is something you should absolutely do anyway, though, seeing as it enables the remote to work better and not rely on line-of-sight. I had some issues with initial pairing, but a forced reboot via power loss fixed that up quickly. Notably, too, the U8G features built-in Assistant support that allows the TV to work like a Google Assistant speaker as it listens for the “Hey Google” hotword. In a living room scenario, I can see this being super useful, and the reliability of the microphone was pretty much on par with something like a Google Home/Nest Mini.

Finally, there are the dedicated shortcut buttons. It’s a pretty standard affair, starting with Netflix, YouTube, and Prime Video. The other three buttons fall to Disney+, Peacock, and Tubi. As with any remote, you may not find all of these buttons useful, but I’d be willing to bet that most buyers will find at least half of them handy. If not, there’s a “Fav” button toward the top of the remote that is fully customizable to your needs. It can open specific features on the TV or any app of your choosing.

Ultimately, the Hisense U8G falls into the positive column for me. It has a ton of good aspects without many negative ones, and that’s whether it’s a TV you’re buying to replace an existing model or add to a room for the first time. The picture quality is stellar for the price point and performance of Android TV is better than most streaming boxes/sticks you’d be able to go out and buy.

As mentioned earlier, this is a TV that’s tempted me on multiple occasions to buy it for myself to replace my living room TV, and saying that is the highest recommendation I can give for any product.