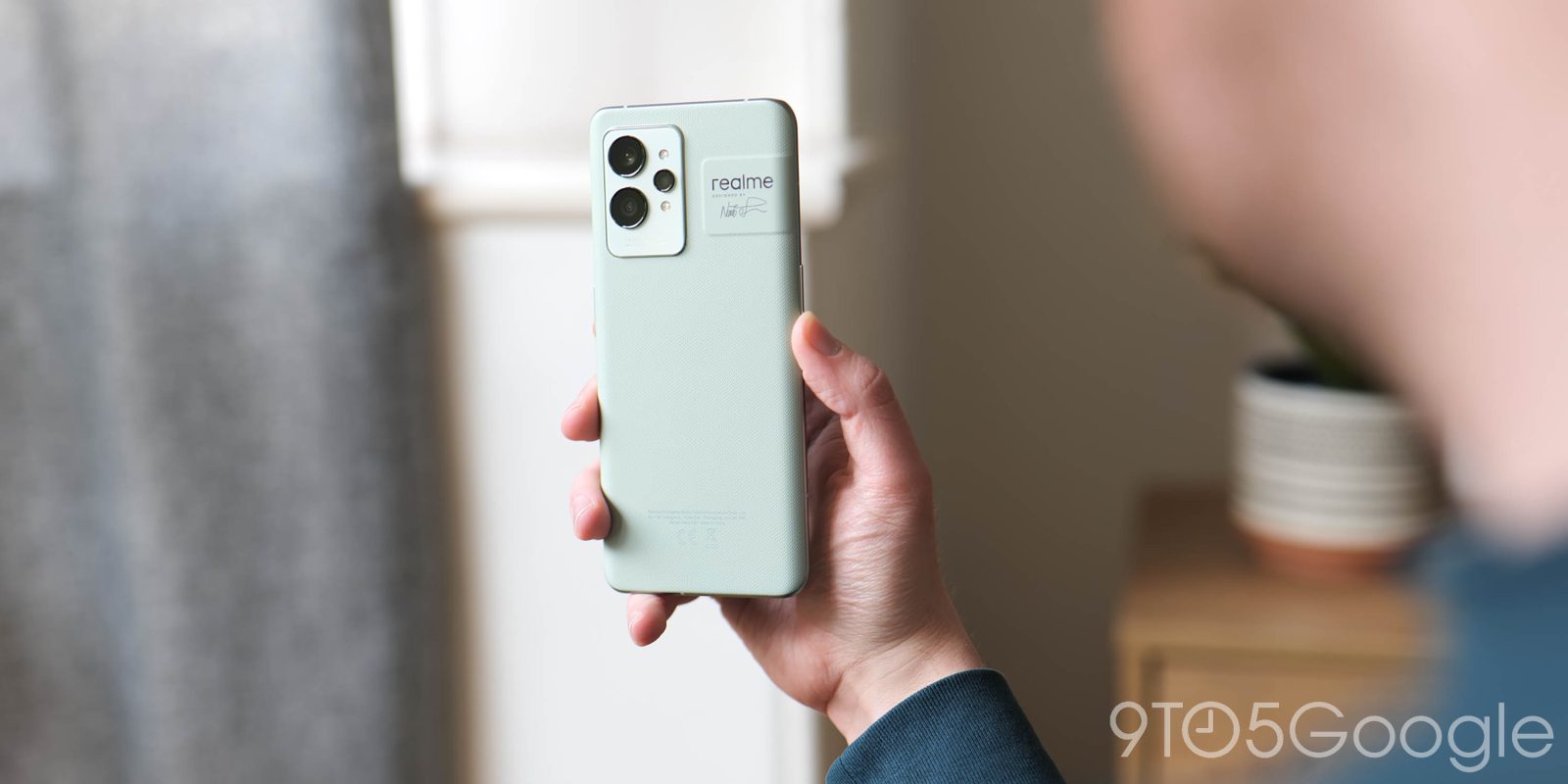 After rapid expansion into more global markets, Realme is now starting to take on the flagship space in the truest sense with GT 2 Pro – and this could be the very best Realme phone to date.

In some markets, specs are king. Realme has played to this in recent years with a series of smartphones aimed at packing in as many of the buzzworthy internals and cost-cutting elsewhere to make things fit. Instead, this time around the Realme GT 2 Pro offers a more well-rounded package but an inflated price to boot. The result is a better package and one that might be worth a look.

On previous Realme phones, there has been a “parts bin” feel, and while that isn’t necessarily a negative when you consider the price points targetted, you can see right away that with the GT 2 Pro more due care and attention is being paid here. Enlisting Japanese industrial designer Naoto Fukasawa is one way to do that. The Realme GT 2 Pro rear panel comes coated in a bio-polymer finish that mimics paper and it reminds me of papyrus in that it’s thick and textured but ultimately more subtle under your thumb or finger.

It’s not abrasive, rather soft and tactile in a way that a glass backplate cannot be. There’s a certain approachability here that really works. Throw in the soft pastel green finish and I think Realme is on to a winner here. Although, this good design is somewhat undone with the addition of a panel dedicated to Fukasawa’s signature. It cheapens an otherwise intricate design.

Without a hefty plate of glass at the rear, the Realme GT 2 Pro is deceptively lightweight and comfortable to hold. However, I noticed it was a tad top-heavy – likely owed to the camera bump and associated sensor tech packaged within. Becuse of that, I’m glad that there is a matte black silicone case in the box as an added free accessory – it also helps that it’s genuinely excellent.

At the front is a magnificent 6.7-inch flat LPTO 2.0 AMOLED display, and it’s one of the best parts of the package on offer here. Although it has a maximum 3,216 x 1,440-pixel resolution, even when set at FHD+ things look excellent on this 120Hz panel. The flat screen is easy to navigate and the in-display fingerprint scanner is well placed for swift unlocks.

One of the few annoyances of the Realme GT 2 Pro’s impressive screen is the auto-brightness settings. My advice would be to disable this as it can take a long time to react and lead to frustration when things suddenly become less legible or videos dimmed for no discernable reason. Sadly, the speakers are not particularly special here either despite the Dolby-Atmos certification. They can reach almost astronomically loud levels without major distortion though.

Another gripe with the hardware here is the lack of an IP certification. These days it’s almost an expectation that a smartphone will come with some sort of water and dust ingress protection. To get a supposed flagship device without is quite a bitter pill to swallow given that even some affordable devices now come with IP67 ratings as standard. This is likely a cost-cutting measure to ensure other areas get the “best” components. If that is the case, it’s a little more forgivable but an annoyance all the same.

This is where things get a bit muddied, as with a quick peek at Realme UI and you’ll recognize that this is ColorOS in all but name. I can’t say I hate it, but between this, OxygenOS and ColorOS, it’s hard to differentiate between a BBK device these days. You have access to a treasure trove of customization and tuning features. At times it can feel as if there is too much here to contend with, but if you like to tinker this is a solid option. While the Android skin is somewhat divisive, the performance truly is in step with the best on the market today.

Android 12 is pre-installed here, which runs very well thanks to the combination of the Snapdragon 8 Gen 1, generous RAM allocation, and, probably most importantly for long-term usability, the UFS 3.1 storage. Things load instantly – or as close to that approximation as possible. Multi-tasking is a breeze and the “RAM expansion” feature allows you to set aside a portion of the onboard storage to act as virtual memory and make some more gains. With either 8 or 12GB of onboard RAM, this will make little real-world difference to the GT 2 Pro.

There is plenty under-the-hood here to contend with but it’s becoming harder and harder to truly discern one flagship processor from another as the years progress. Smartphone gamers may see improved frames and better-sustained performance than last year’s Snapdragon 888. While I’m not predominantly a mobile gamer – as I await Apex Legends Mobile – titles like Call of Duty Mobile run with the fluidity I expected. The supposedly improved vapor cooling system also meant the Realme GT 2 Pro did not get uncomfortably warm either.

The Chinese firm has extended its own update policy for this device. It has guaranteed at least three major Android upgrades and four years of regular security patches. Realme didn’t quite define just how “regular” these security patches will be, but there is some level of support here at least until Android 15 arrives and then for a further year.

Boasting a setup that utilizes dual 50-megapixel sensors, I had high hopes for the Realme GT 2 Pro triple camera array. I’ve been very impressed by the camera here and the consistency of stills in a variety of scenarios. Realme has done very well with the camera tuning and I’ve been left very happy with just about every photo that I have taken with the setup here.

Clearly, there were some leftover microscope cameras from the Find X3 Pro last year and Realme has decided to throw one in here along with a 150-degree ultrawide. These two inclusions are certainly gimmicky, but the extra-wide field of view certainly adds a vibe you won’t get from many other camera systems. Microscope photos are fun for a minute and then cease to be useful for anything meaningful.

When sticking to the main sensor, shots are detailed and have good contrast, colors, and the dynamic range is also solid. There is a certain “pop” to photos taken here and while things are not always 100% color accurate, the Realme GT 2 Pro camera has a certain visual appeal that many cheaper phones lack.

There is a sizeable 5,000mAh battery tucked away inside the Realme GT 2 Pro, and it’s fairly solid. At no point did I worry about my review unit unceremoniously dying even with a few days of heavy camera usage. When playing lots of videos and with the display brightness cranked up it proved easier to tax the internal cell, but a full day of usage was not a problem even in these instances.

When using it as a secondary device for texting, emails, and photo-taking with a backup SIM installed I could easily get two days. On a few occasions, I was touching a third day before seeking the charger. At 65W speeds, you can go from under 10% to 70% in well under 20 minutes. It softens the blow of no wireless charging and my charging habits simply involved plugging in via USB-C for a few minutes here and there to keep things running.

After making a splash in India, the Realme sub-brand clearly has sights on the rest of the world, and the GT 2 Pro is the best device to carve out a larger market share. Having tempered my own expectations I’m surprised at how good almost all aspects of this fairly affordable flagship Android phone are compared to the rest of the space.

You could argue that Realme is taking a more OnePlus-like approach with the GT 2 Pro. By offering the best internals, a decent camera, and top-tier performance all under the pricepoint of the baseline Galaxy S22 you’re getting a lot of phone for your money. A few little things irk me, such as a lack of wireless charging, given that this is supposedly a flagship, but the 65W charging definitely helps ease that frustration.

Overall, there’s a lot to love here, and while sometimes things feel a little bit unrefined or slightly unpolished, you’re getting a lot of bang for your buck. The sad thing is that the Realme GT 2 Pro is only available in limited regions. In the rest of the world, you might want to look to the Galaxy S21 FE, Galaxy S22, or even the Pixel 6 as alternatives.