ComScore has released its latest report today, detailing the market share of the major smartphone OEMs and their platforms. Unsurprisingly, Apple is still leading in terms of handsets shipped with 41.7% of smartphones shipped, while Android is still leading the mobile operating system market with 52.8% of the market.

The leaders’ numbers haven’t shifted much, with Apple’s hold on OEM market share only dipping by 0.1% compared to the quarter before, while Android has gained about 0.2% over its competitors. Samsung is the second-place OEM with 28.6% of the market (a 1.1% dip), followed by LG, Motorola, and HTC. LG is up 0.7% percent, but the latter two haven’t seen any significant change since the 3 month period ending November 14th.

When it comes to mobile operating systems, Android is followed by operating systems from Apple, Microsoft, BlackBerry, and Symbian, but the latter three are all negligible compared to Apple’s hold. iOS market share dropped 0.1% to 41.7% in the most recent quarter, while Microsoft gained a measly 0.1%. BlackBerry and Symbian are mostly forgotten completely at this point, both having less than 2% of the market.

Finally, the today’s comScore report outlines the most popular smartphone apps for the three months ending in February 2015. Facebook of course is still the leader with 71.2% saturation, followed by YouTube, Google Search, Google Play, and Facebook Messenger, which all reach more than 50% of the app audience. 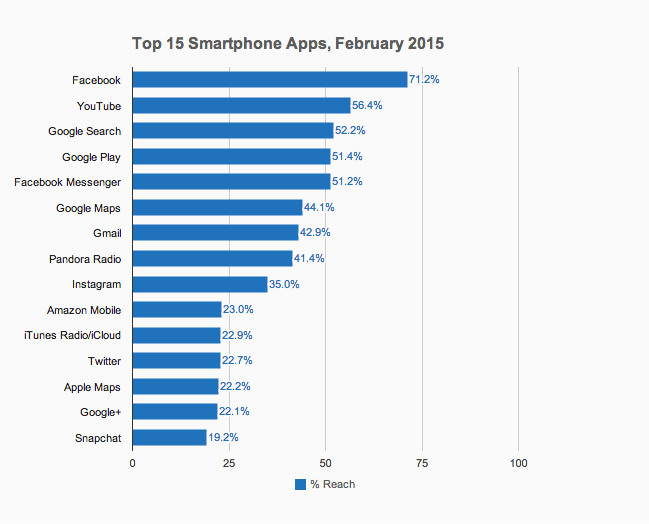