Review: Lenovo’s YOGA Book is a futuristic take on a 2-in-1 tablet, and it’s pretty fantastic [Video] 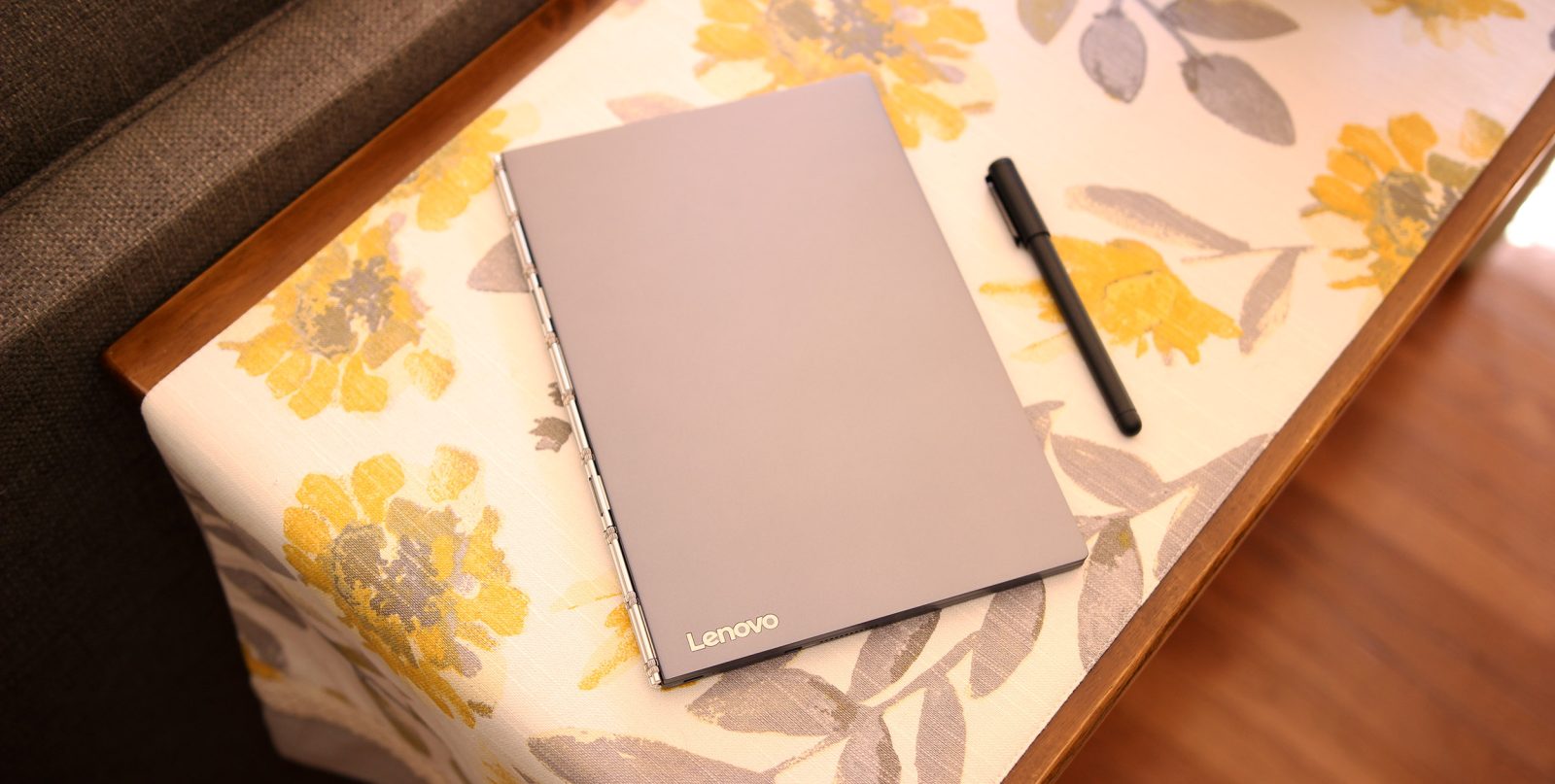 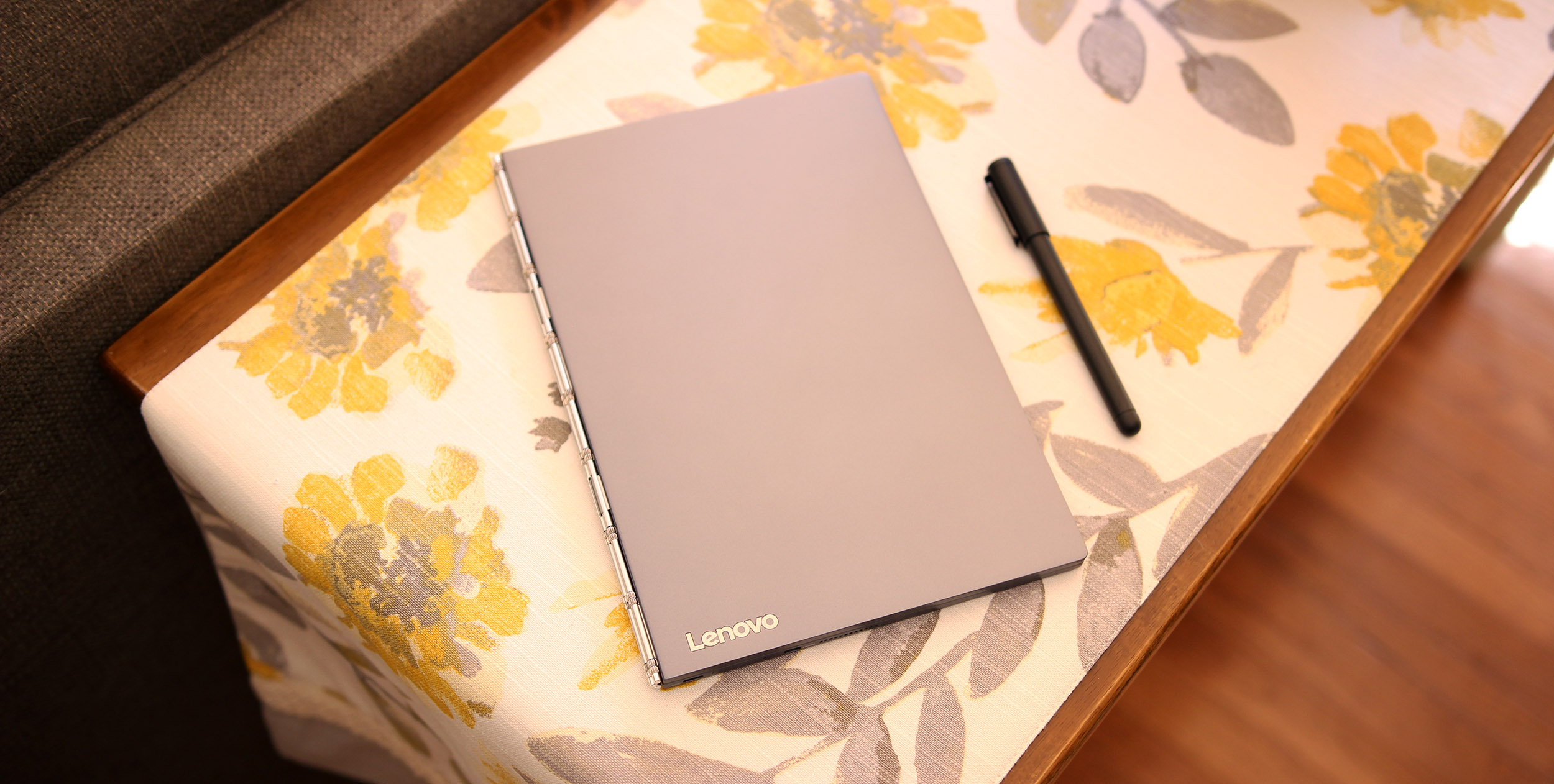 At IFA 2016, Lenovo had a lot of fun new products to show us such as the Moto Z Play, a few new laptops, and a new Moto Mod as well. The biggest thing that was revealed however was a new tablet, the YOGA Book.

WHAT MAKES THE YOGA BOOK SPECIAL? |

The YOGA Book is unlike any tablet we’ve ever seen before. It takes the idea of a 2-in-1 tablet, like the Pixel C, and puts a new spin on it. Like many of the company’s past Windows laptops, the YOGA Book has a 360-degree “watchband” hinge which holds everything together. On one side, a 10-inch display, on the other, the future, but we’ll get into that later.

The first thing you’ll notice about the YOGA Book is the hardware ─ it’s stunning. The all-metal build feels great and, like the name implies, it looks like an actual notebook. It’s very well-built and screams quality, but it’s not perfect.

My biggest complaint about the hardware is the hinge. It looks great, but if you hold the device in portrait mode, something I do often for reading, the hinge sometimes gets in the way. This, of course, is a pretty minor complaint, and that should say a lot about the hardware on this device. Lenovo nailed it.

Another thing to note is that Lenovo opted to use microUSB on this device. While it works fine, USB C would have been a far better choice, especially given the focus on productivity.

As for software, I spent my time, of course, with the Android-powered YOGA Book. Lenovo has Android Marshmallow running out of the box, with a fairly heavy skin on board. The “Book UI” is certainly different, but on this hardware it makes all the sense in the world.

Lenovo has changed the launcher to lack an app drawer, but you can still access the app drawer since it’s now constantly docked to the navigation bar. Recent apps also gets a makeover, and a big change as well. While you can press the multi-tasking button to see all active apps, you can also tap on the app’s icon on the navigation bar. These changes make the YOGA Book a viable option for productivity.

Further, Lenovo also added multi-window, accessed by double tapping the status bar. Right now this is limited to only a handful of apps, such as Gmail and Chrome, but when the device gets Android Nougat, I’m sure things will get better. There are also a handful of extra shortcuts in the quick settings menu.

Powering the YOGA Book is a Quad-core Intel x5 Z8550 processor, 4GB of RAM, 64GB of storage with a microSD card slot.

Despite the heavy skin, the YOGA Book doesn’t suffer from any notable performance issues. I noticed a handful of times where performance was a bit choppy, but overall I was satisfied.

The 10.1-inch display on the YOGA Book is an IPS panel at 1920×1080. The display is fine with good brightness and viewing angles, but I feel it would have benefited from a higher resolution. Overall though, there’s nothing to complain about. Just because it has to be said though, that bezel… 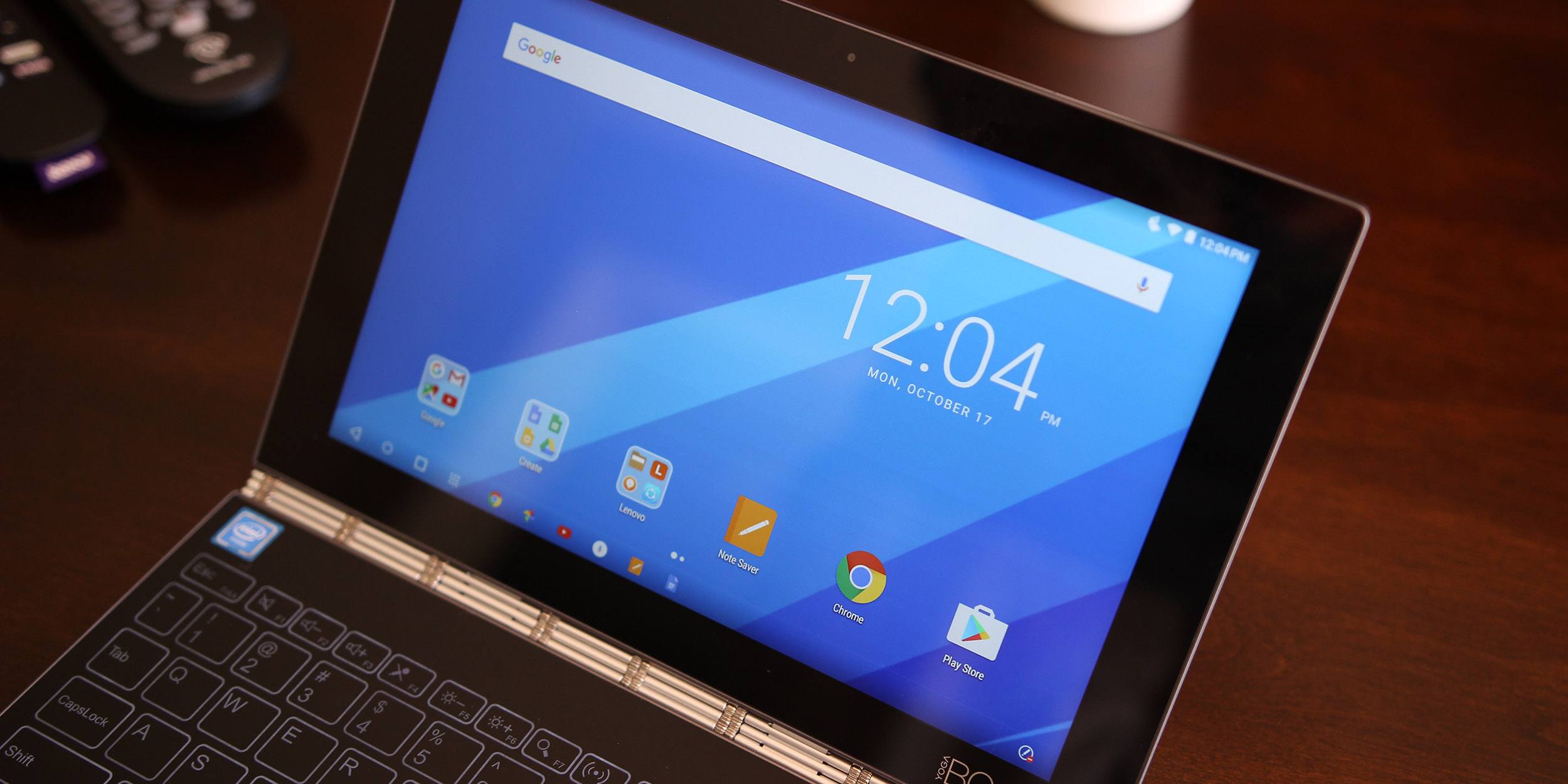 What really sets the YOGA Book apart, however, is its other half. This extra panel has two functions, one to act as a keyboard, the other as a touchpad for the included stylus, so let’s talk about those one at a time.

This is a 2-in-1 device, but Lenovo has a unique take on the keyboard. Instead of using traditional keys, there’s nothing more than a capacitive panel which Lenovo calls the “Halo Keyboard.” The concept is pretty simple ─ backlighting on the panel shows where the keys are and you use it as a typical keyboard. It has an anti-glare coating and Gorilla Glass 3 to provide a better feel, but the real question is how the typing experience really is. 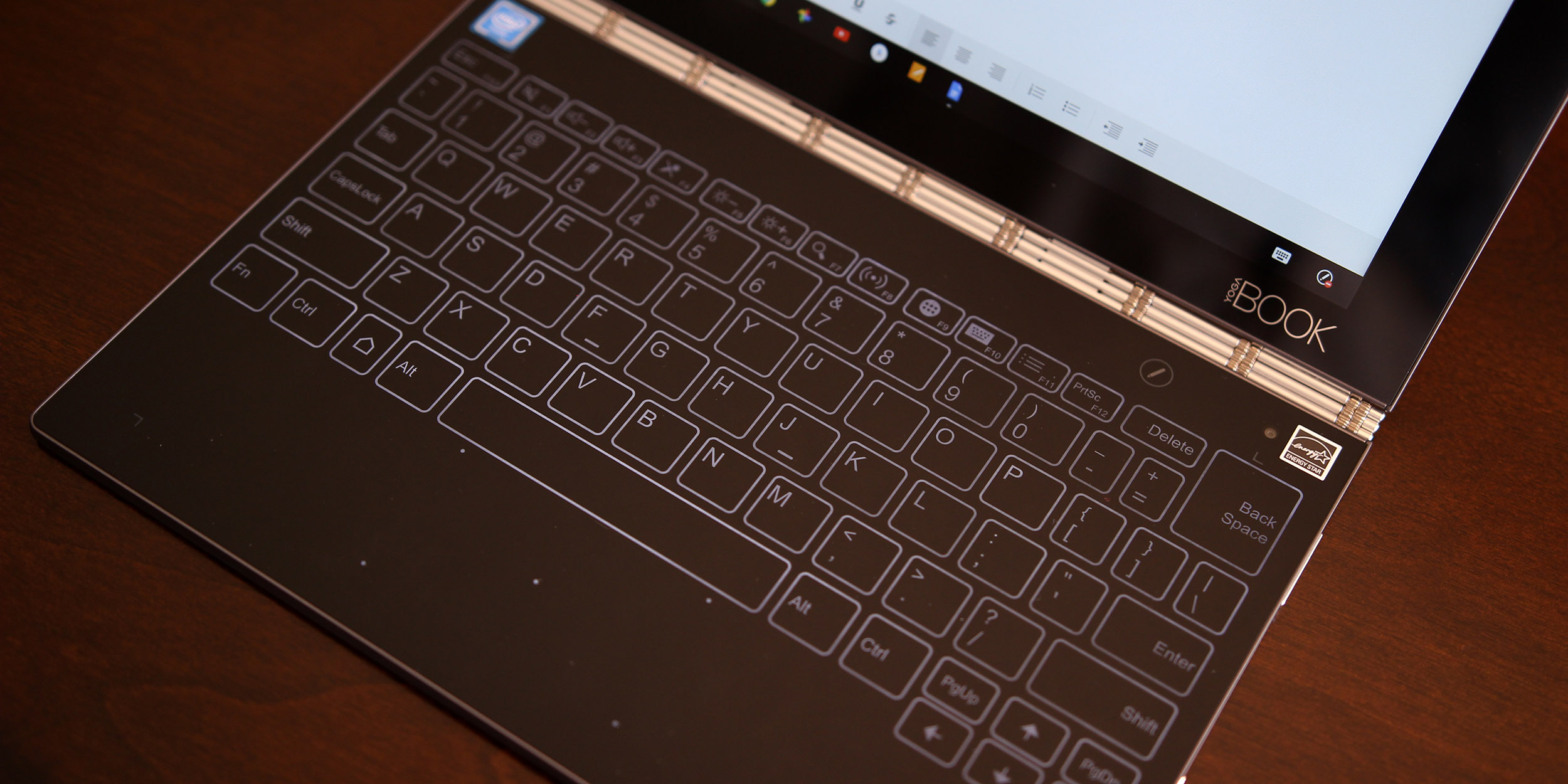 The short answer, surprisingly decent. At first, I had a lot of trouble getting used to the keyboard, resulting in plenty of typos. Over a couple of days, though, I got a bit more used to it. I still don’t type as quickly as I do on a standard keyboard, but I can easily type on it, including the entirety of this review.

The biggest reason why this touch typing experience works is the haptic feedback. While this doesn’t compare to what Apple has been doing with 3D Touch buttons and trackpads, it is quite good.

Speaking of the trackpad, it’s probably the worst part of the experience. It works for certain small tasks, but overall it’s pretty terrible.

The other function of this second panel is to act as a touchpad, which Lenovo call the “Create Pad,” for the included stylus. This touchpad uses Wacom technology with 100-degree angle detection and supports 2048 levels of pressure sensitivity. Long story short, you can use it for taking notes or drawing.

Out of the box the pen comes with a Wacom stylus tip which can be used on the touchpad on its own. To activate it, simply hit the pen icon on the top right of the touchpad. This will automatically open a notepad for the pen which can be used for drawing or note taking. It works very well, but my favorite part is that you can use actual paper to take notes as well.

Simply place the included notepad over the “Create Pad” and swap the stylus tip for a pen tip, three of which are included in the box. To do that, take the cap off of the pen, use the hole on pen to remove the stylus, then insert the new tip. Once you’ve done that, use the pen on the paper as you like and everything written on the paper will automatically be transferred to the tablet. The included “Paper Book” works best with the YOGA Book, and 20 refills are included, but you can use it with any A5 sized paper. The pen can also be refilled with any mini-ballpoint ink tip.

Embedded within the YOGA Book is an 8,500 mAh battery, recharged over microUSB. Battery life was pretty decent, but not outstanding by any means. Standby battery life was good, but if you’re using the tablet heavily, you’re going to need to charge it at least every other day, if not every day. On average I could get about 6 hours of screen on time over the course of two days before hitting 10-20%. 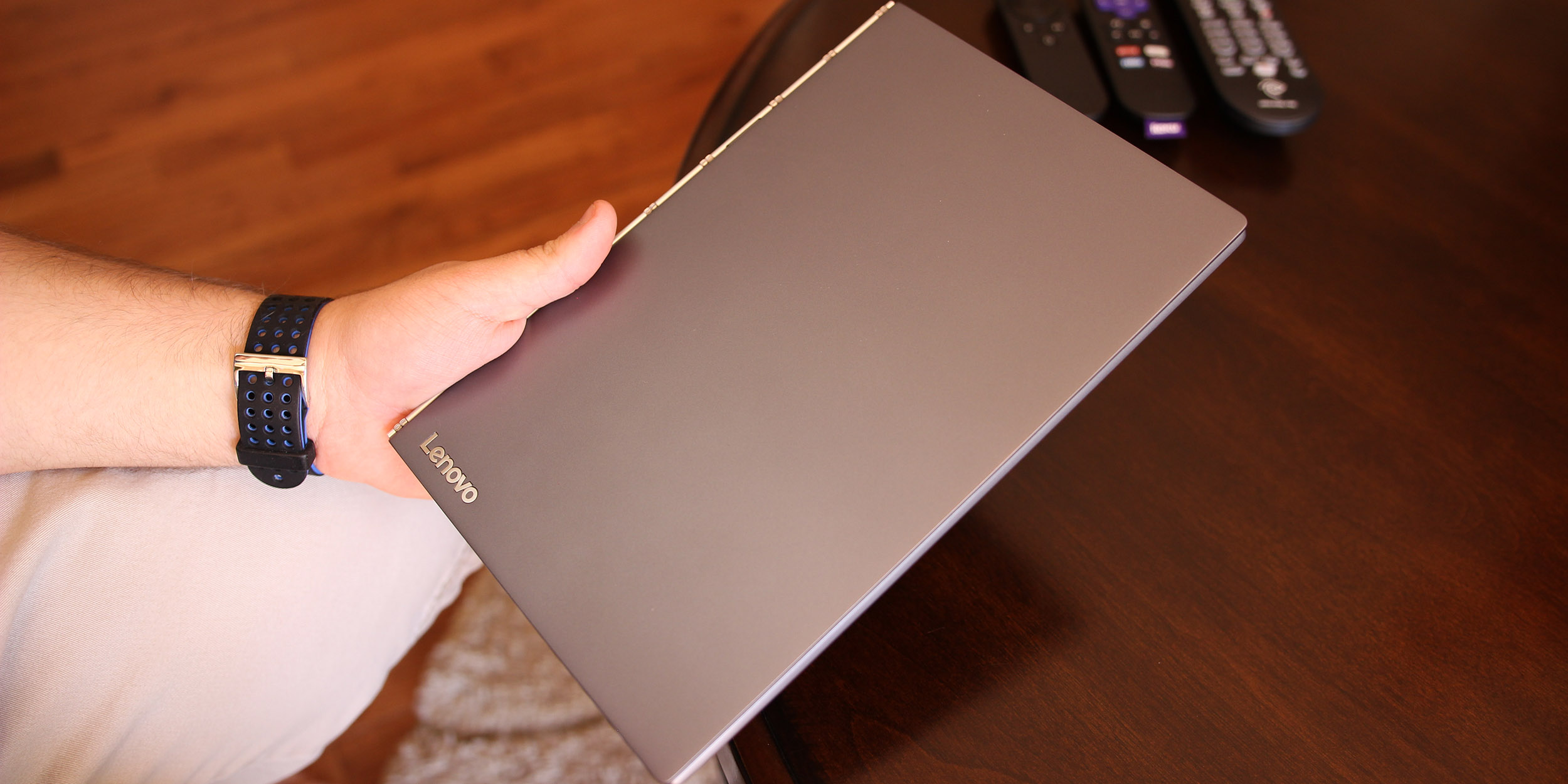 Overall, the Lenovo YOGA Book is a fantastic device. It’s a new take on the tablet form factor, and I really like it. This kind of technology is what we’ll see in the future, like it or not, and the YOGA Book is a great start. The company has future plans to add this technology to other devices, including a Chromebook, and I’ll be interested to see what’s in store…

Right now the YOGA Book is only available for purchase from Lenovo, but it should be headed to other retailers in the near future. Pricing for the Android variant lands at $499, and I’ve got to say that’s a solid price for what you’re getting.