Google kicked off its MWC with expanded rollouts and new features for Google Assistant and Lens. The company also teased Android One and Go announcements, with HMD Global’s Nokia today announcing new devices based on those two initiatives.

Nokia’s first Android One device builds off last year’s Nokia 6 with a similar metal unibody crafted from a single piece of aluminium. It was announced earlier this year for the Chinese market. While the same width (75.8mm), the new Nokia 6 is 5.2mm shorter due to the capacitive buttons being dropped for on-screen ones.

This results in the device adopting a circular rear fingerprint-sensor just underneath the 16MP rear camera with Zeiss optics and dual-tone flash. Up front is a 8MP wide-angle sensor with the 5.5-inch HD IPS display covered by 2.5D Gorilla Glass underneath.

The processor receives an upgrade to the Snapdragon 630 with either 3 or 4GB of RAM, with 32 or 64GB of storage. The 3,000mAh battery features USB-C fast charging with the device running Android 8.0 out of the box. It will be available in gold, black copper, and white in early April for €279. As the name suggests, the Nokia 7 Plus is another upgrade whose standout feature is a 6-inch 18:9 2160 x 1080 display that features rounded corners. The device is touted as having a larger screen while maintaining the footprint of a 5.5-inch device. 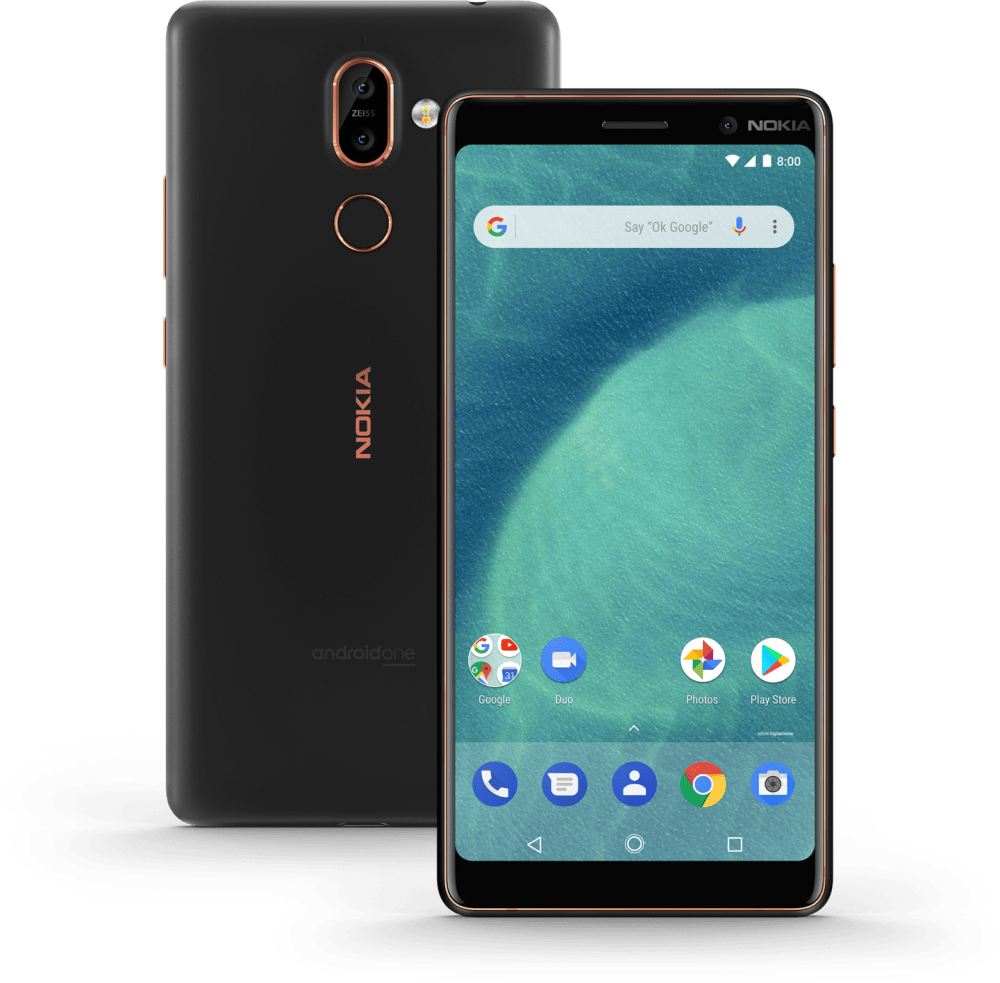 Machined from a single block of aluminum it features copper edges and is powered by a Snapdragon 660 processor with 4GB of RAM and large 3,800mAh battery that is rated for 2-days of usage.

The other standout feature of this Android One device is its dual-camera setup that uses a primary 12MP sensor and secondary 13MP telephoto lens with 2x optical zoom. Meanwhile, there is a 16MP front camera with all three able to use a new Pro Camera mode with manual controls. At €399, it will also be available in early April.

On the Android Go front is the Nokia 1. This rudimentary device features a 854 x 480 4.5-inch display with thick bezels all around. It is powered by a quad-core MediaTek processor operating at 1.1GHz with 1GB of RAM and 8GB of storage with microSD card expansion.

The 2,150mAh battery is quaintly removable and charges over microUSB. There is also a 5MP rear camera, and a 2MP front facer. It supports customizable Nokia Xpress covers that are a throwback and is running an optimized version of Android Oreo. The phone will be available in early April for $85.

The company also launched the flagship Nokia 8 Sirocco at MWC 2018.