At the beginning of the week, an internal document leaked and provided us with some essential details about the forthcoming Moto Z3 Play. Now, screenshots from what looks like a promotional video have surfaced that show off the handset in-hand alongside a new Moto Mod that will allow the phone to connect to 5G.

These photos, obtained by XDA-Developers, clearly show off the Moto Z3 Play’s display. As usual, the handset looks to be running a near-stock launcher that utilizes Google’s apps. Additionally, you can see that the 6-inch 18:9 FHD+ AMOLED display features very slim bezels all f the way around.

One thing to note about the Moto Z3 Play’s screen is the navigation bar that can be seen at the bottom of the display instead of the traditional on-screen navigation button. We’re being told that this is Moto’s own implementation of gesture-based navigation (most likely similar to the controls found on the last-gen Motorola phones) running on top of Android 8.1.

While the quality isn’t the greatest, you can see a side profile of the Z3 Play in the photo below. It looks pretty thin, which coincides with the 3,000mAh battery spec previously leaks.

Additionally, we can see the two volume buttons sitting right above what looks to be the side-mounted fingerprint sensor. This will most likely double as a power button.

Lastly, we have the 5G-enabling Moto Mod. We’ve already seen this accessory leak once before, but the design appears to be slightly different. Instead of just being a somewhat thick Mod, it has a bit of an antenna sticking out of the top of the unit.

Unfortunately, we still do not have any information when the Moto Z3 Play will be announced or how much it’ll cost. 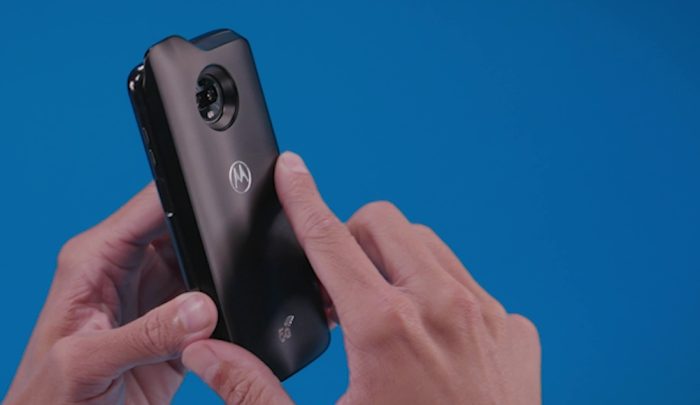