For quite a while now, the casting experience baked into Google Chrome has looked and functioned the same. It works, but has been overdue for a bit of polish. This week, it appears Google is doing just that with a cleaner interface for the Cast interface in Chrome.

As first pointed out by ChromeUnboxed, it appears that the Cast interface within Chrome is getting a facelift. This new design improves on a handful of things, but first and foremost it updates the design. Rather than offering that blue bar up top, the interface is completely white with a list of cast targets underneath.

One of the big improvements comes at the bottom of that list where you’ll find a new button labeled “Sources.” This allows users to mirror their screen, send just select video content, or just send off audio. Previously, this functionality was hidden under an unassuming arrow on the top of the interface. With this new button, it’s much clearer.

Further, the way in which you control casting sessions has also changed. You still click a target to start the casting session, but stopping it is now as simple as tapping the stop button next to that target. It does appear that this interface is unfinished, though, as the volume controls have disappeared.

In any case, these changes are certainly welcome. The interface is much cleaner and easier to understand, fitting in well with the rest of modern Chrome. Like with other recent changes, though, there’s no current ETA on when this will arrive. ChromeUnboxed was able to have this interface appear on the Chrome 71 beta update on an HP X2 Chromebook, but I’ve been unable to replicate that on other Chromebooks with the same software or my Windows machine on the latest update. 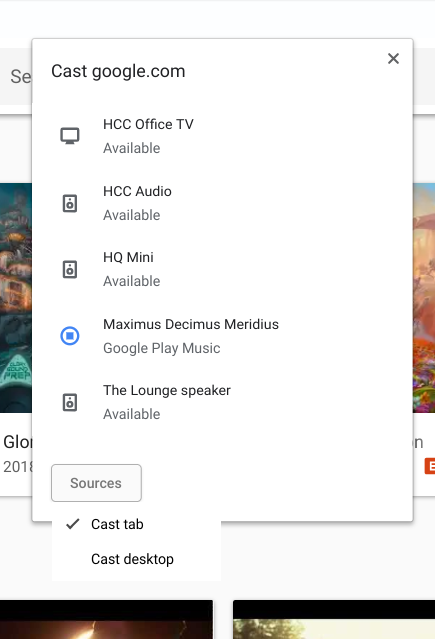