As Chrome OS continues to improve and offer consistent features and experience across all devices (with the exception of the Pixel line’s special treatment), the only real difference between two Chromebooks is the external and internal hardware. The Acer Chromebook 514 has hardware that certainly sets itself apart from the pack, but not always in a good way.

On the surface, the Acer Chromebook 514 portrays an elegant image with an all-aluminum chassis. At just over 3lb, the Chromebook 514 lends itself to portability quite well. It’s easy to just grab and go, no doubt thanks to its aluminum build. For better or worse, the Chromebook 514 is designed to be used exclusively in laptop/clamshell mode.

With the (optional) touchscreen display, Acer made the interesting choice to exclude glass. For some, this could be seen as a negative, but I personally enjoy having a touchscreen that doesn’t occasionally reveal my reflection in full detail. The downside, of course, is that touch movements are not nearly as smooth, which makes apps like Chrome Canvas less usable.

As for the screen itself, the 1920×1080 resolution IPS display is decent, but nothing to brag about. Colors look a bit warm and somewhat lackluster overall. Darker blues, such as those used in Chrome’s “Slate” theme, are difficult to distinguish from black, even on maximum brightness. 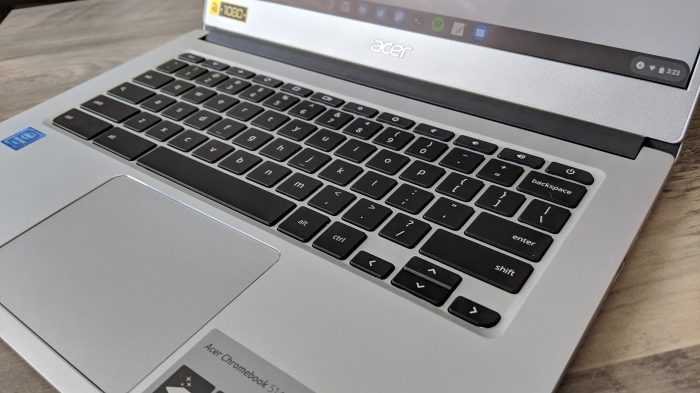 The Acer Chromebook 514’s backlit keyboard is soft, in a way that makes it feel gentle on the hands when typing. Whether you like it or not is very much based in personal preference. I enjoyed the soft, cushioned feel of each keystroke, but if you’re the type who needs good haptic feedback or yearns for clicky mechanical switches, this is not your keyboard.

For a 14-inch Chromebook the Acer Chromebook 514 offers a fairly sizable touchpad. Made from Gorilla Glass, it’s smooth to the touch, but doesn’t let your fingers glide as nicely as I’d like. It also doesn’t consistently recognize three-finger clicks, which makes my daily habits somewhat frustrating. 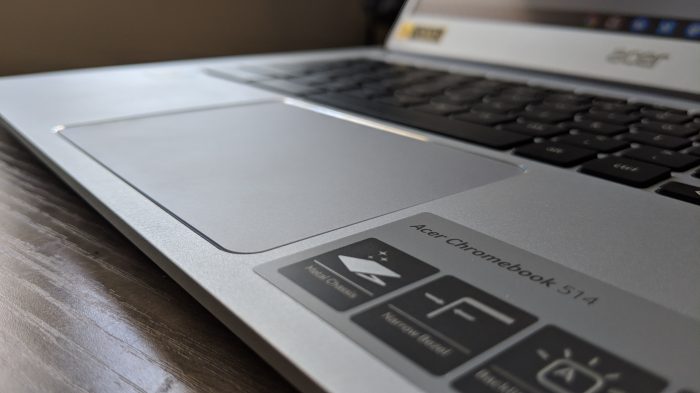 There’s stereo speakers on the underside. Chromebooks are not exactly known for their audio quality, and the Acer Chromebook 514 is no exception, sounding just terrible when listening to any sort of music.

Performance is where things really go wrong for the Acer Chromebook 514, as even its highest model is backed by a low-end Intel Pentium N4200 processor. With web apps becoming more demanding, and Chrome OS now compatible with Android and Linux apps, Chromebooks need good performance now more than ever.

Instead, the Chromebook 514 sometimes struggles with just my daily web use which involves Slack, Gmail, WordPress and a handful of research tabs. Pages are a bit slow to load, and, despite having 8GB of RAM, switching tabs sometimes takes considerably longer than expected.

One thing I cannot deny about the Chromebook 514 is that it packs the signature Chromebook battery life. It can last through one and a half work days on a single charge, at medium screen brightness. While real world usage doesn’t quite achieve the 12 hours of battery life that Acer promises, I would feel comfortable leaving the house without a charger if the battery was at 50%.

Should you buy the Acer Chromebook 514?

For $500, there are far better Chromebooks on the market that will feel better and perform better than the Acer Chromebook 514. Acer’s own Chromebook Spin 13, while $200 more, offers well over $200 in value, compared to the Chromebook 514.

Shockingly, while the model I used (CB514-1HT-P2D1) is based on an Intel Pentium, there’s actually even lower models with Intel Celeron processors. While these models offer up to a $150 discount, I can’t imagine how much worse the performance would be.

If you’ve got a passion for aluminum and aren’t so concerned with your device’s performance, the Acer Chromebook 514 can be picked up from Amazon or direct from Acer.