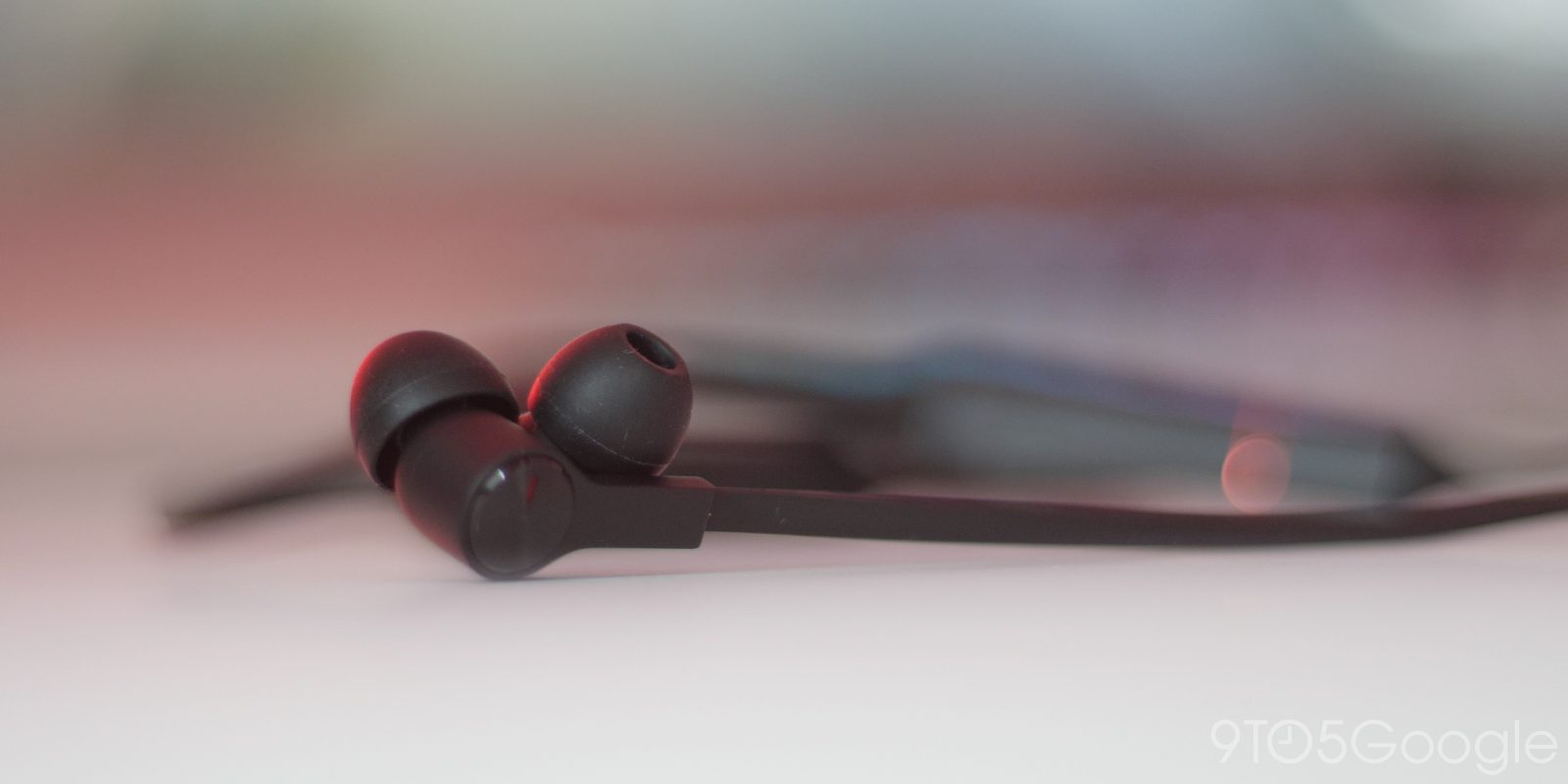 The slow and drawn out death of the traditional headphone port means that even heading to the gym we need a solid pair of workout wireless buds — which is where the Huawei FreeLace earbuds come in.

Having a solid pair of earbuds solely for working out might seem an indulgence, but sweat, strain, and the general rigors of the gym (or any other workout) puts a different wear on your headphones compared to simply listening during a normal day.

That means things like water, sweat, and dust resistance tend to be key and it’s the reason that headphones tend to come in weird and wonderful shapes, sizes and fits. It does mean that we sometimes see gym-goers wearing wireless headphones or earbuds connected via a tether.

That is the design that Huawei has adopted for the FreeLace earbuds. As a genuine everyday user of the Samsung Galaxy Buds, just how does this cheaper, sports-focused option stack up?

The last pair of wireless “sport” headphones I have personally owned happened to be the Anker SoundBuds Curve earbuds. I simply wanted a cheap and cheerful pair of Bluetooth headphones for the gym and cycling to and from the job I had at the time.

I couldn’t get over the uncomfortable — but secure — over-ear clip style. Luckily, the Huawei FreeLace buds haven’t opted for that awful clip option. I say “awful” as I have particularly large ears and do struggle to find headphones, and by extension, earbuds that fit well in that style. 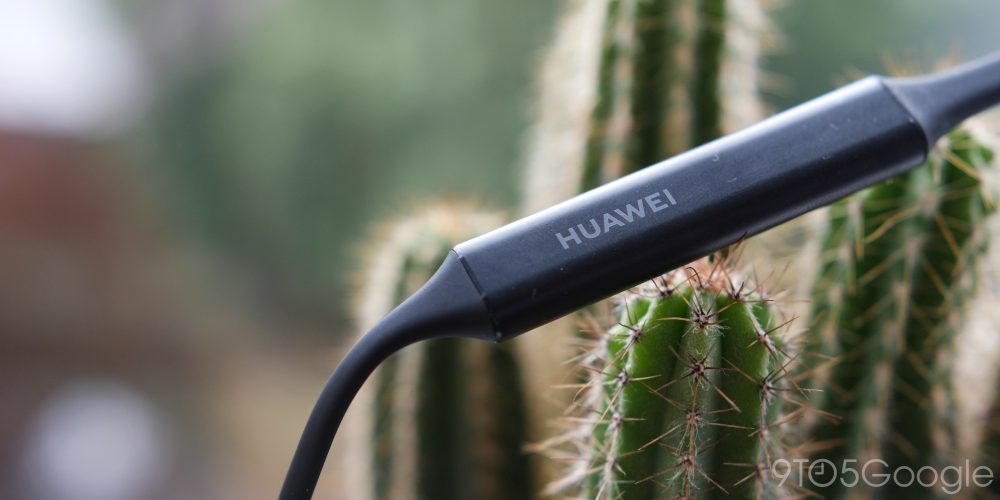 The simple design is not something I would consider to be a trademark of Huawei. The FreeLace buds are very minimal and are pretty sleek in the black color at least. Not being loud and proud is something I am a fan of with certain tech accessories — headphones or earbuds being one such accessory — so I’m pleased that Huawei opted for a simple design.

You get two extra pairs of bud tips in addition to the standard option that comes pre-installed. I found the pre-installed tips to be the perfect fit, but the sound isolation wasn’t exceptional so settled for the largest of the three pairs to get better audio isolation.

I will say that I am a little disappointed that there is no carry case or even a pouch within the packaging. You’ll have to pick up one of your own to protect the cable from nicks and potential stretching. Stretching might prove to be something you will be wary of, as the cable actually detaches about two-thirds of the way along to reveal a USB-C connector. 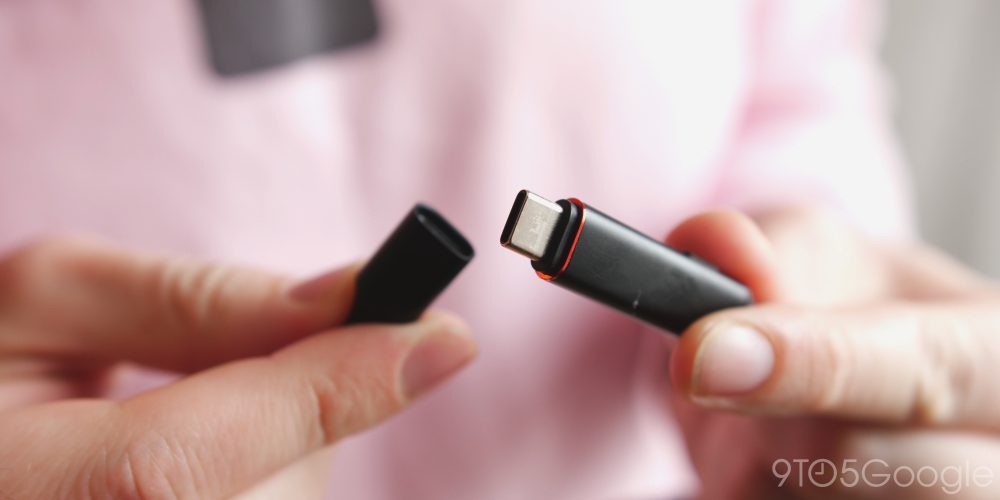 This connection is the only way to charge the Huawei FreeLace earphones. You snap the cable apart and then plug the USB-C cable into the bottom of your device to juice them up. It’s a neat way of charging, as you wouldn’t usually be without your device. There is also an adaptor in the box that converts from USB-C to USB-A which does allow you to charge via a plug or PC — but let’s be real for a second — that is nowhere near as cool as charging up via your phone.

Back to that cable, and this is where I think that the design is much better suited to activity in general. As infrequently as I head to the gym nowadays, the ability to remove one earbud and then have it hang down your chest without completely dropping it is especially valuable. Whereas the Samsung Galaxy Buds solve this by using a screw-in style fin, they aren’t quite as comfortable for extended wear as a result. 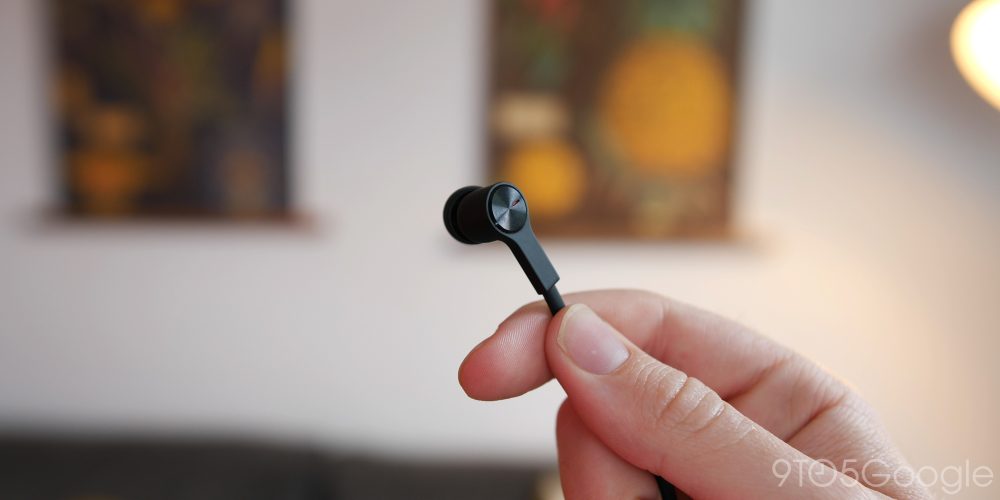 Plus drop a solitary bud and you run the risk of doing damage to them. That could result in breakage quite easily, but the tethered together nature of the FreeLace earbuds negates this risk altogether. 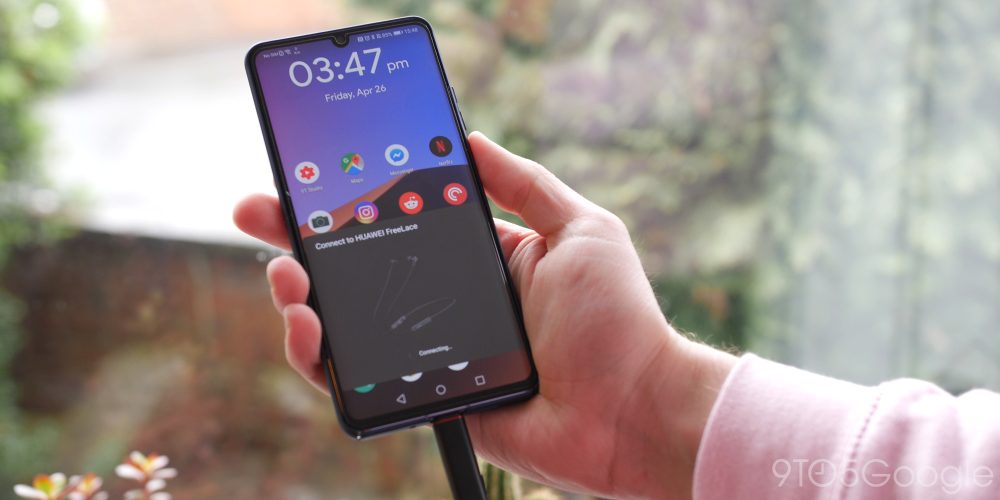 I found the pairing process a bit frustrating to be completely honest. I even say that as I have the P30 Pro — which is the easiest device to pair with. I found that with my OnePlus 6T, the device didn’t recognize the buds at first.

Using the USB-C cable you plug into the bottom of a Huawei phone or device and it will instantly pair. That process was finicky and wasn’t foolproof. I still think that OEMs on the Android side of the fence really still have some catching up to do with Apple in this regard.

Once paired though, the reconnection process is absolutely painless. Power on and then your earbuds will connect quickly and easily. The initial process is just not as intuitive for non-Huawei users as it should be. It didn’t help that for some reason, my earbuds came with Chinese as the pre-chosen language and I had a Chinese lady give audio queues that I simply couldn’t understand at first.

There isn’t even an application to manage the headphones for pairing and management. That is technically a pro and a con, but one that is worth noting as it would still be nice to have the option to check, pair, or manage the FreeLace earbuds.

Let’s talk the core portion of the FreeLace earbuds, and unfortunately, it’s arguably not the strong suit of these earbuds. The bass can feel a little hollow even compared to the TicPods Free. The overall clarity and soundstage are acceptable, but not exactly great. For me, the lack of ability to really tweak the EQ settings natively is a bit disappointing too.

Listening to more nuanced tracks and classical music is not something you’ll enjoy too heavily with the Huawei FreeLace earbuds. Firing up Flume’s Holdin’ On resulted in a muted experience with bass that really lacked the oomph I usually look for, although the mids and highs were well-preserved even at high volume. 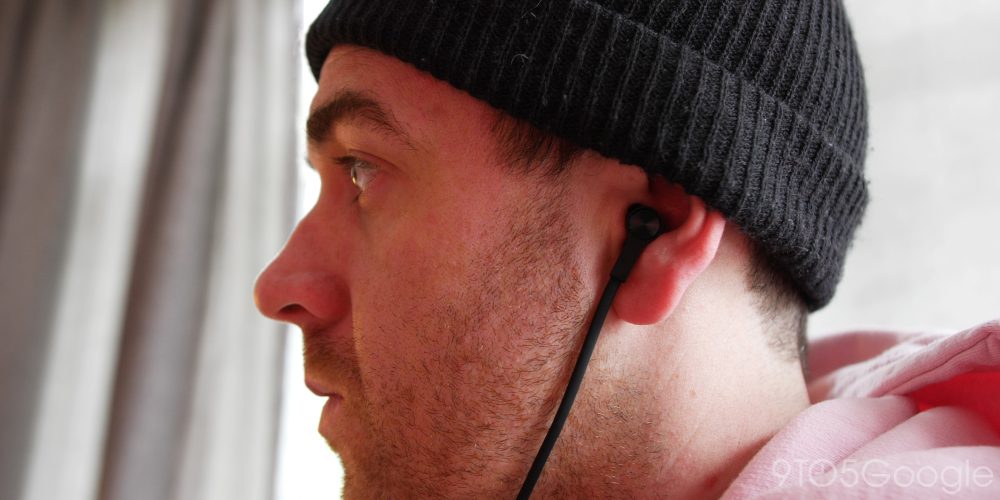 I just find that music feels a little hollow and lacking in real depth. To be completely honest, for gym wear that isn’t too much of an issue as I use music as a literal soundtrack for working out. If you wanted an everyday pair of earbuds, then it becomes harder to really defend the average audio experience.

Conversely, with spoken word audio — particularly podcasts — the audio is crystal clear and literally zero issues. I do find though that I avoid putting the volume at the very top as it starts to separate and the quality really does suffer.

As for the controls, I am a huge fan of the inline remote. It has a brushed aluminum finish and feels sturdy unlike the cheap, small, and frustrating plastic controls you find on many similarly styled wired and wireless options. I prefer the tactile feedback that you get from physical buttons rather than touchpads that end up not playing nicely with sweaty digits. 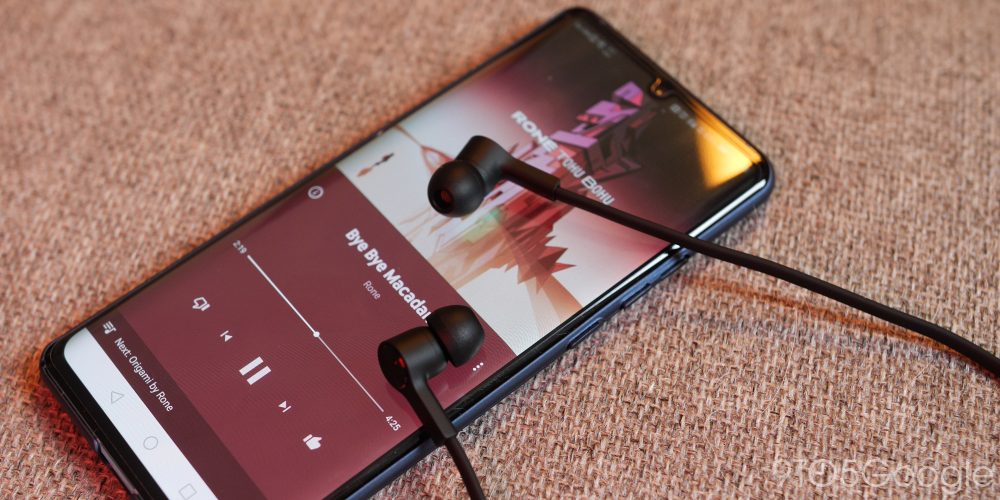 Being able to adjust the volume, skip tracks, and launch the Google Assistant is nice and convenient with actual buttons. As for the controls themselves, they are nice and generic. So there are dedicated volume up/down keys and a central multipurpose button. A single tap pauses, double tap skips, and a triple tap skips back. I’ve found that these controls work nine out of ten times in my experience.

Another neat inclusion as part of the hardware is the magnetic buds themselves. That doubles up as an extra control so that when you close them together it will pause the current track or end a call. Simply pull them apart and the music will resume, doing so will also answer an incoming call.

Superb but with caveats 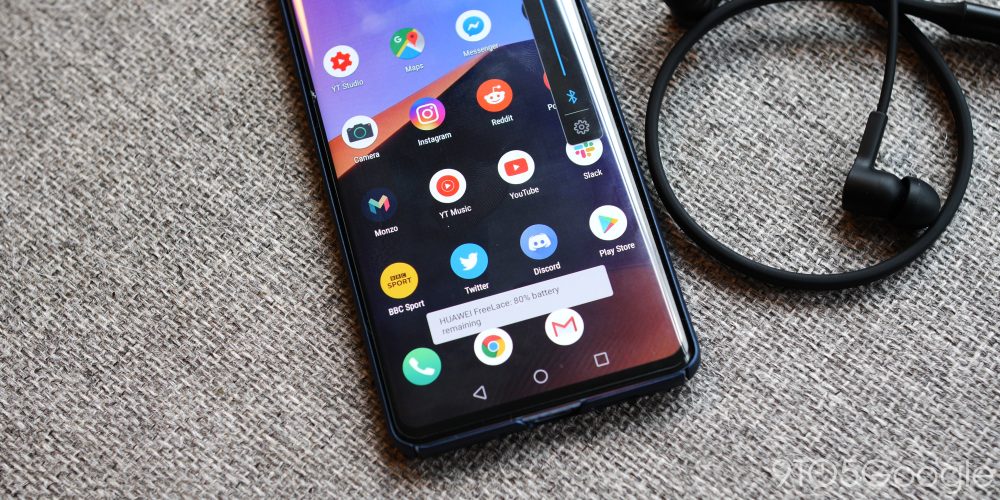 Huawei claims that the FreeLace earbuds can manage 18 hours of continuous playback, but I’m not so sure that I’ve even managed anywhere remotely near that level since owning the earbuds. I tend to pick them up and stuff them in a bag before I go anywhere, charge when I can and then hope that they last for a quick blast in the gym or walking my dog.

The 120mAh battery does well though, I would estimate over 10 hours of usage over the course of a week before I had a warning on my P30 Pro about low battery life. I personally just wish that Huawei hadn’t made such a bold claim about the battery life — it’s even embossed on the packaging — as you feel a tiny bit robbed. 10 hours is still awesome and I have to keep telling myself that.

I mentioned charging already, but it is neat to be able to stick the headphones into the bottom of your smartphone and give the FreeLace earbuds some juice. Plugging them into my Pixel 3 charger had them charged in around 10 minutes — I’m not sure this is really recommended though to ensure extended battery health.

Solid but not quite spectacular

At £99 in the UK or around $119, the Huawei FreeLace Bluetooth earbuds aren’t a terrible value proposition. If you happen to own a Huawei device, they are an almost perfect companion. The problem is that the sound quality is only a tiny bit above average at best.

I’m not saying they are bad by any stretch of the imagination, it’s just that for an extra $20 or so, the Samsung Galaxy Buds offer a better overall experience in my opinion. That said, for anyone who would consider themselves extremely active, they are a good option, but most definitely nowhere near the best.

If you simply want a dirt cheap pair of Bluetooth earbuds for the gym with solid bang for your buck audio, then I’d say pick up the Mpow Flame earbuds. Although they have an over-ear clip, at under $20, they are really superb gym-goer earbuds that can withstand a workout and have pretty good audio to boot.

I’m also reluctant to recommend the Huawei FreeLace if you own a non-Huawei branded device. The pairing process was a little bit trickier than it should have been for my other handsets, and that is one thing that really did irk me even despite these earbuds being a solid purchase.

Overall, the Huawei FreeLace earbuds are what I would call a 6.5/10 option. Hopefully, we’ll see the next iteration really improve upon the basic formula Huawei has concocted with the FreeLaces.

Where to buy the Huawei FreeLace earbuds: