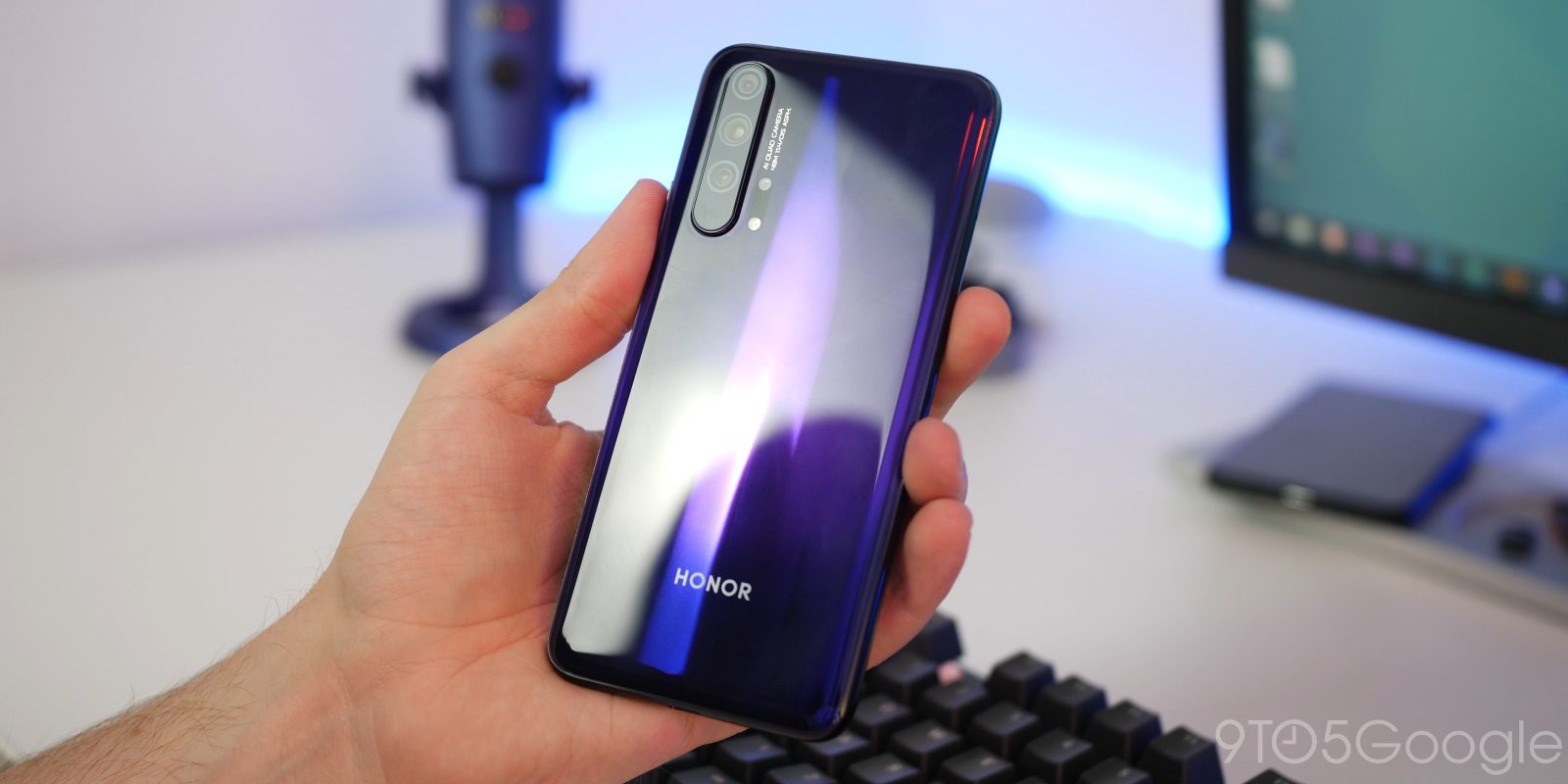 While the Honor 20 Pro is unlikely to ever make it to the United States, for the rest of the world, the phone looked to be the first casualty in the ongoing US-China trade war.

After a short time away from the spotlight, the Honor 20 Pro is back, aiming to take on the middle of the market with a mix of high-end specs and relatively affordable pricing. It’s a compelling device that takes on the OnePlus 7 in raw specs, performance, and pricing.

Honor being an offshoot of Huawei means that you get a similar experience, but often with a few cutbacks or “streamlining” here and there. It’s a real shame that the company may never officially to head to the US unless a miracle happens.

But just what does this smartphone hold over the rest of the competition? This is our review of the Honor 20 Pro. 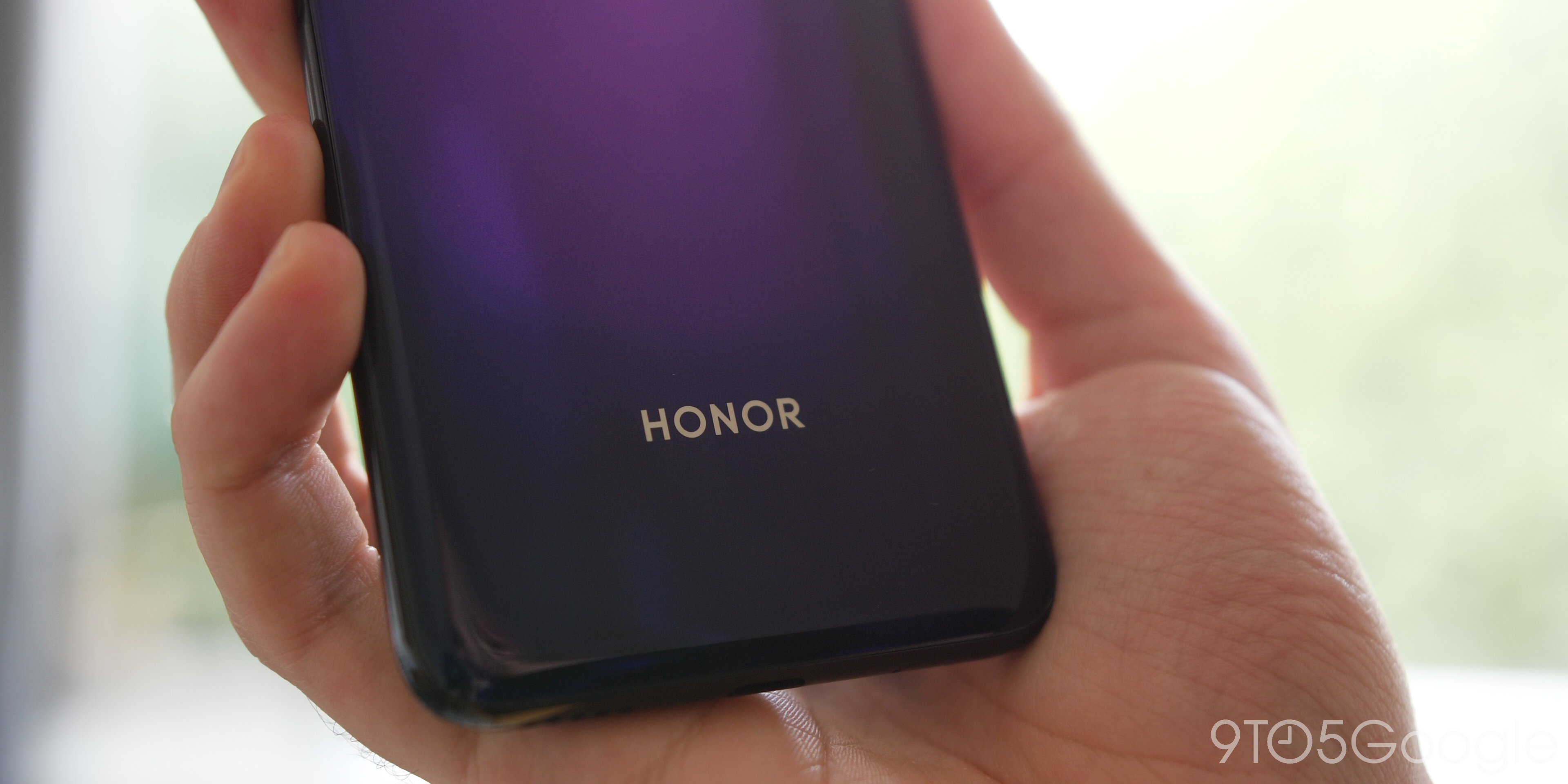 Out of the box, the Honor 20 Pro is a really striking phone in the purple-ish Phantom Black color. It flashes from a deeper black color toward the edges and has a small purple splash in the middle. It reminds me of a certain ghost-type Pokémon family.

Even despite the glass back and large size, the 20 Pro feels almost deceptively lightweight in the hand. It even feels a little “hollow” compared to some other phones on the market. There is no denying that this feels cheaper than the Huawei P30 Pro in the hand.

At the back, the camera bump is actually handled well, as the back glass curves slightly to nestle better into your palm. It also means that the camera bump stops the phone from rocking quite so much if placed face up on a desk or table. I’m not sure if this was a design decision, but it does still wobble a little. 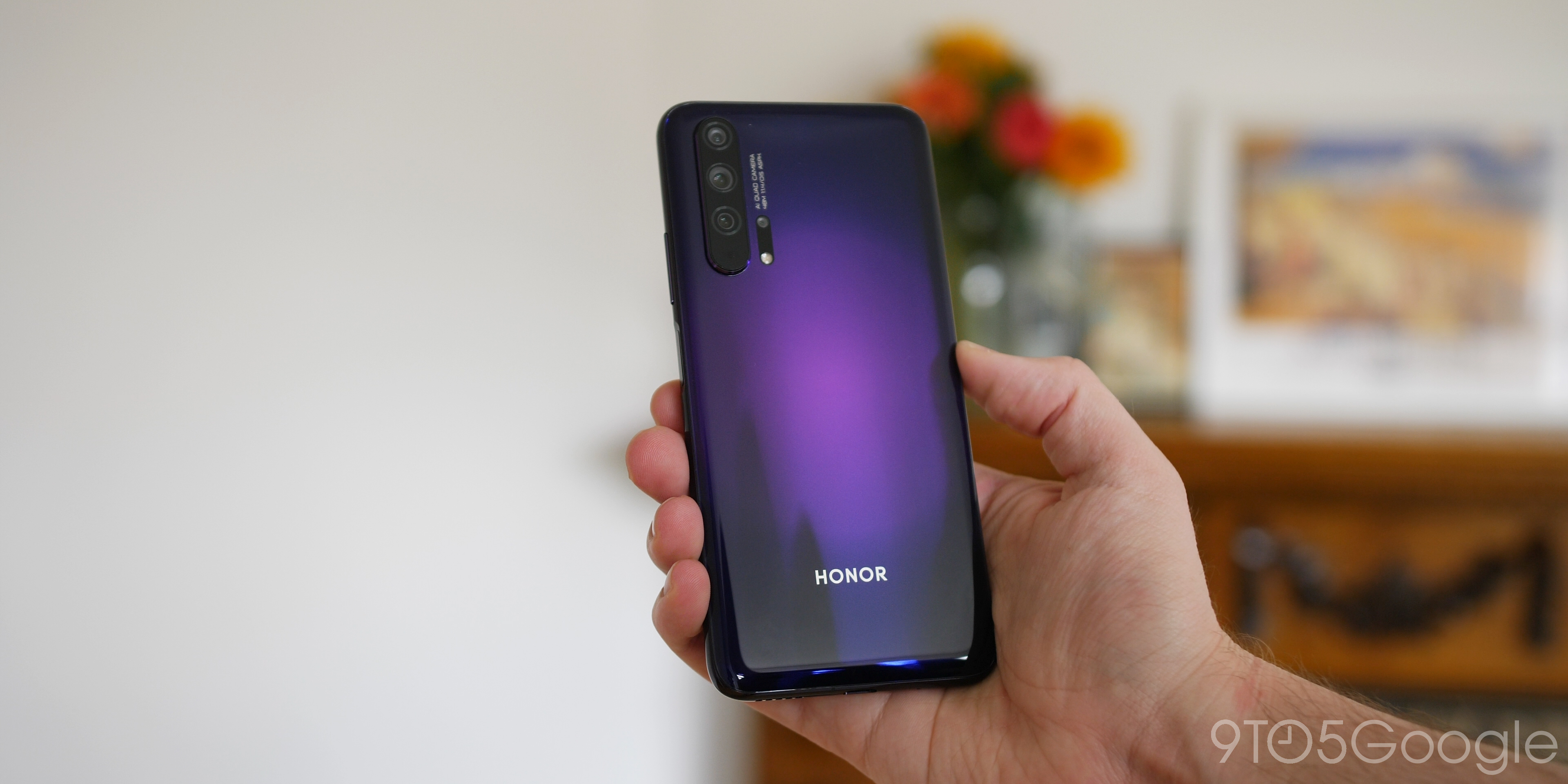 Another thing that might really change your opinion is the inclusion of an LCD display. I’m not completely against an LCD display, but they lack the vibrancy of an AMOLED panel. Luckily, it’s not a major problem here, as the punch-hole laden LCD display is a solid performer.

I can deal with FHD+ when it warrants it. It helps ensure that battery life remains stellar — something I have found with almost every Huawei and Honor phone over the past 18 months. It seems a little confusing that this is the “Pro” model, but doesn’t include an AMOLED panel. Given the midlevel pricing, it makes more sense why we are seeing a slightly less impressive panel. The Pixel 3a and 3a XL have far superior displays than this phone.

The side-mounted fingerprint reader isn’t something that I am a fan of. Although I am right-handed, I can see the right-sided placement being a problem for left-handed people using this phone. Registering more than your thumbprint feels a little pointless.

It’s because of this that I have disabled the fingerprint reader altogether. Instead, I’ve chosen to rely on the screen PIN lock method for security. I would have much preferred a rear-mounted fingerprint reader. This also brings me to another gripe: the haptics.

When you have haptic feedback enabled, it’s hard to stomach the hollow, buzzy vibration that comes from the Honor 20 Pro. I have never been too bothered by haptics on a phone before, but these are some of the worst I have experienced over the past couple of years. My advice would be to disable haptic feedback when typing almost immediately.

Fans of wired audio will be disappointed, as there is no headphone port on the Honor 20 Pro. Instead, it’s dongles all the way unless you have some solid Bluetooth headphones or earbuds. 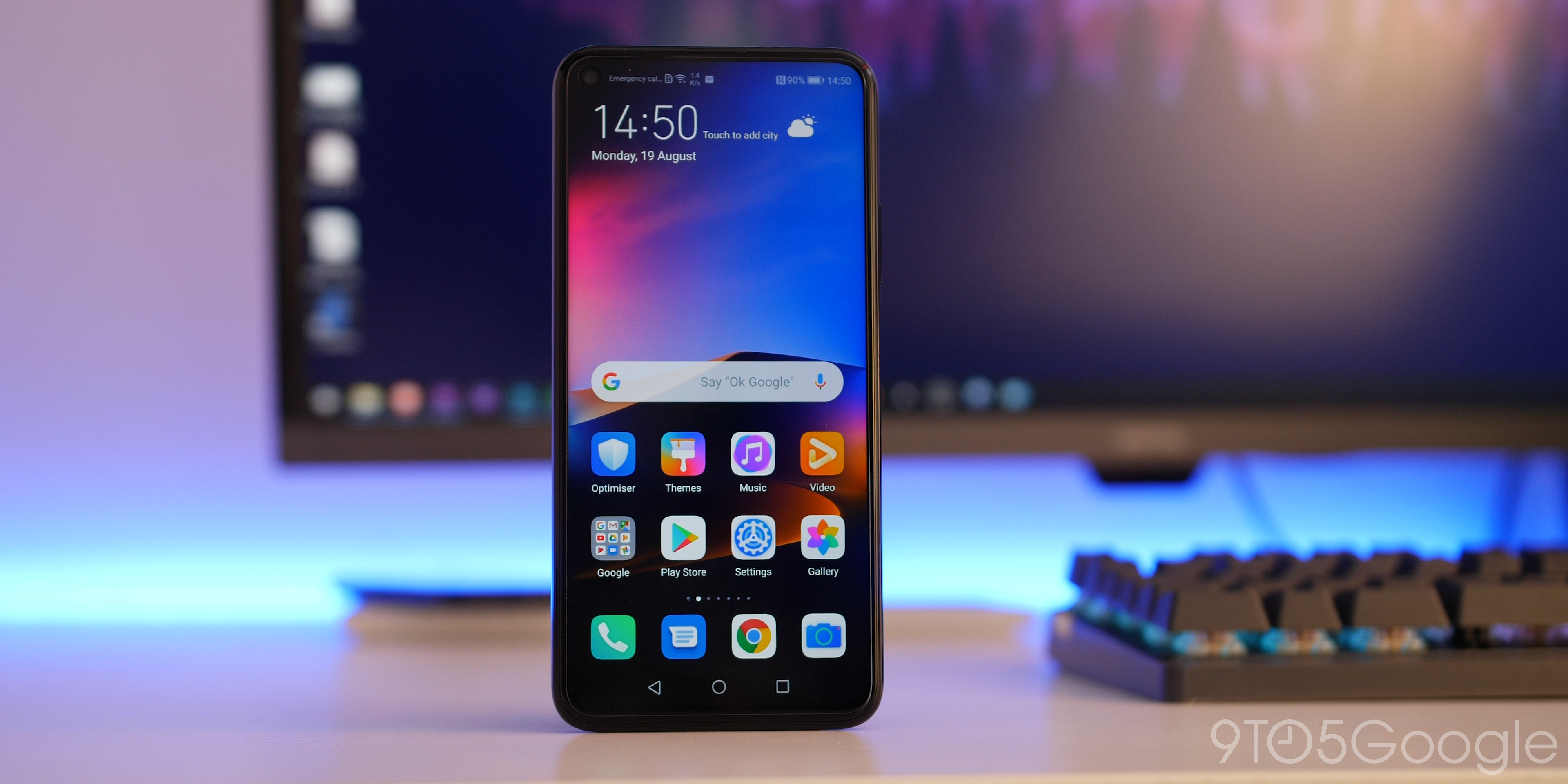 With the Kirin 980 chipset and a base of 6 GB of RAM (up to 8 GB), as you can expect, the Honor 20 Pro manages just fine with everything you would want to do on a modern mobile phone. The only issue is the EMUI-infused Magic UI 2.1.

While EMUI 9.1 and Magic UI 2.1 are practically the same, they both suffer from the same problems. I can’t deny they are feature-packed and offer you so much in terms of options, they just feel overdesigned at times. The look and feel is also somewhere that EMUI 10.0 has improved upon extensively, and will really make a difference to how much fun Huawei and Honor phones are to use in the future.

Menus are still bogged down with too many sections and options, the quick toggles section is useful but doesn’t look great, in my opinion. EMUI 10 cannot come soon enough to the Honor 20 Pro.

That doesn’t mean that performance is bad because this is pretty much a flagship device in every other regard. Menus, apps, games, and more all perform just as they would on any other high-end smartphone. I still don’t like how aggressive Magic UI is at killing background processes and apps to save battery, but overall I cannot find fault in the performance of this latest Honor smartphone.

While the display isn’t as good as some others, in videogames you get exceptional performance. 3D titles such as Asphalt: Legends run well with zero hiccups, as a gaming device this would be a great choice. 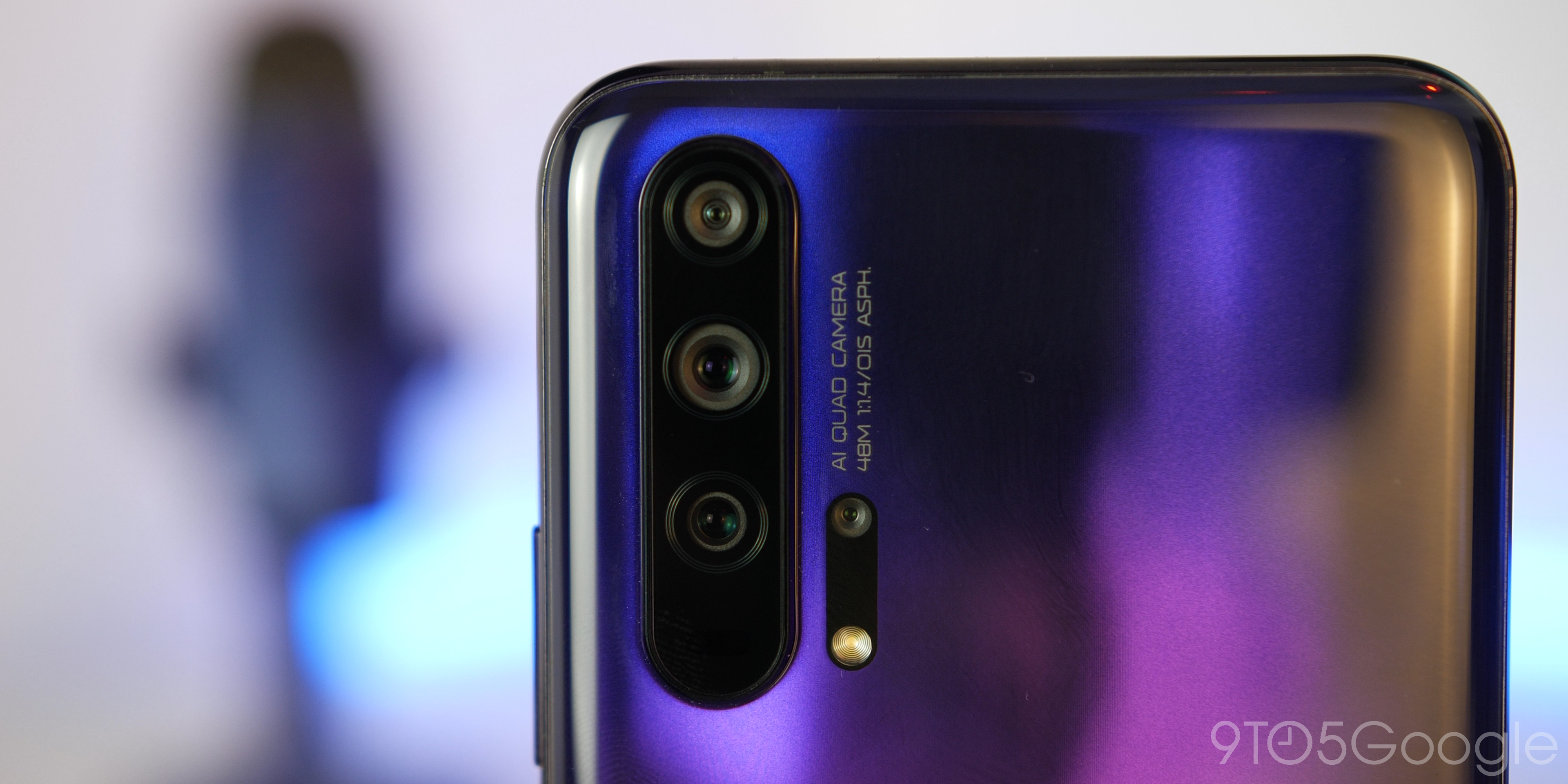 The quad-camera setup found at the back of the Honor 20 Pro has already achieved an impressive 111 score, courtesy of industry camera testers DxOMark. While the scoring system is of diminishing importance — as it isn’t always an indication of the actual real-world quality of a camera setup — it still does give you some idea of what to expect. With that headline score, you would be well within your rights to expect top-tier performance.

The four cameras come in a few flavors: a main 48-megapixel main sensor that comes with optical image stabilization, a secondary 16-megapixel sensor with a wide-angle lens, an 8-megapixel telephoto lens and OIS, and a 2-megapixel macro camera.

In terms of performance, this camera setup doesn’t perform too differently from the Honor View 20 — which we saw at the turn of 2019. The main 48-megapixel camera is the star of the show but is aided by the flexibility of the rest of the camera setup.

I love being able to take both zoomed-in shots and ultra-wide photos on the one device. The P30 Pro still reigns supreme in terms of overall flexibility, but the Honor 20 Pro offers just enough to make taking photos that bit more enjoyable. It also helps that the end results are almost as good as it gets on Android.

Video is one area that I am pushing myself to use more and more on my smartphones. I can’t deny that I prefer to use my GH5 for anything video-related, but the Honor 20 Pro manages to be a solid smartphone video performer. It benefits from OIS, and the overall colors and exposure tend to be much more stable than some other camera phones on the market.

You can use all of the lenses to record video with up to 4K too, which isn’t the case with some other smartphones with higher price tags. I will say that I find the telephoto zoom lens to have slightly more saturated colors than the other lenses but I quite like the look and feel.

I have always tried to avoid recording video in low light, as there are very few smartphone cameras that can manage acceptable, let alone good results. I will say that the results are often passable. I am a little sad that you can only record 4K at up to 30 fps, but it’s not a dealbreaker — 4K 60 fps will likely come with the Kirin 990 in a potential Honor 30 Pro. 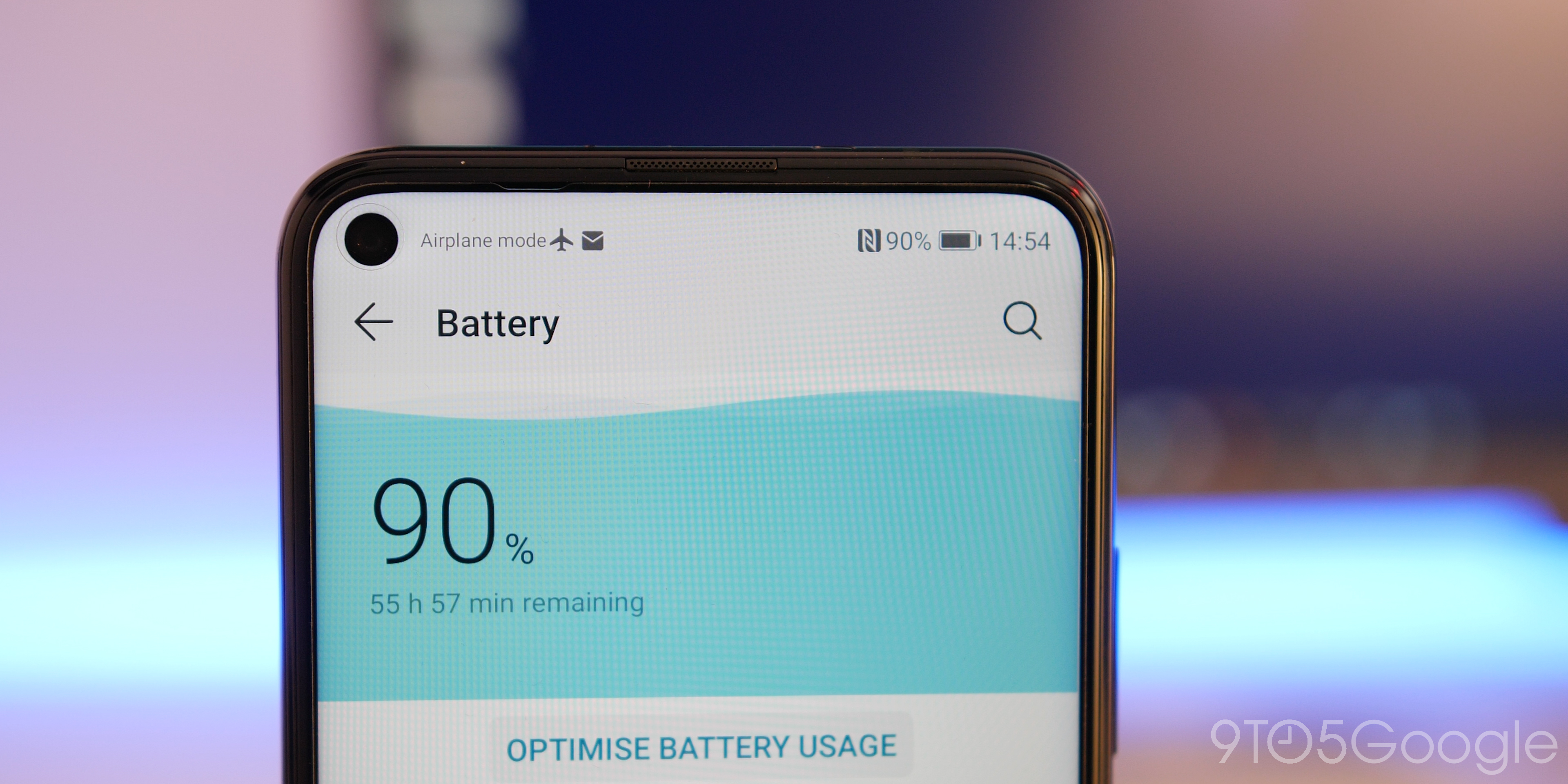 With a 4,000 mAh battery and slightly lower-resolution display, the Honor 20 Pro manages seriously impressive lifespans on the regular. Throughout a week of solid usage, it wasn’t uncommon to get just shy of two days of usage out of this phone.

It doesn’t quite match the lifespan of the Huawei P30 Pro, which if I use sparingly can reach two days with ease. Playing tons of Pocket Mortys saw me manage a full day with no real concerns over the course of a lazy weekend. You can top up nice and quickly, thanks to the 22.5W fast charger in the box, which is always a bonus.

The Honor 20 Pro fuses much of what makes many of the high-end Huawei smartphones so popular while cutting back in a few core areas that make it harder to ignore. It’s most definitely a comfortable phone to hold, which is more than I can say about some phones that cost double or even triple.

Obviously, the lack of availability in all markets makes it hard to recommend the Honor 20 Pro over similarly priced and specced options on the market. The camera is superb, and in the United States, the Pixel 3a still feels like a solid compromise. It even has arguably better software, but with a bump in overall performance.

The camera performance is one of the biggest sellers here. You get one of the best camera setups on the market right now but at a much lower — wallet-friendly — price. I am loving the wealth of options provided by the various lenses, although I look forward to the EMUI 10 camera UI overhaul.

Should I pick up the Honor 20 Pro?

Now if you are outside of the US, then yes, this is a fantastic phone at a really great price point. That said, if you are in the US, it becomes harder to recommend with the issues surrounding importing and shipping. If you are desperate to get hold of it, then I would suggest trying Amazon UK. This means that you get Google Play Services installed as standard.

I would be more inclined to suggest you stick with the Pixel 3a, as in the United States, it is still the benchmark for affordable smartphones. Alternatively, I would suggest that you up your budget a little and pick-up the OnePlus 7 Pro — which is probably the overall best phone on the market right now.