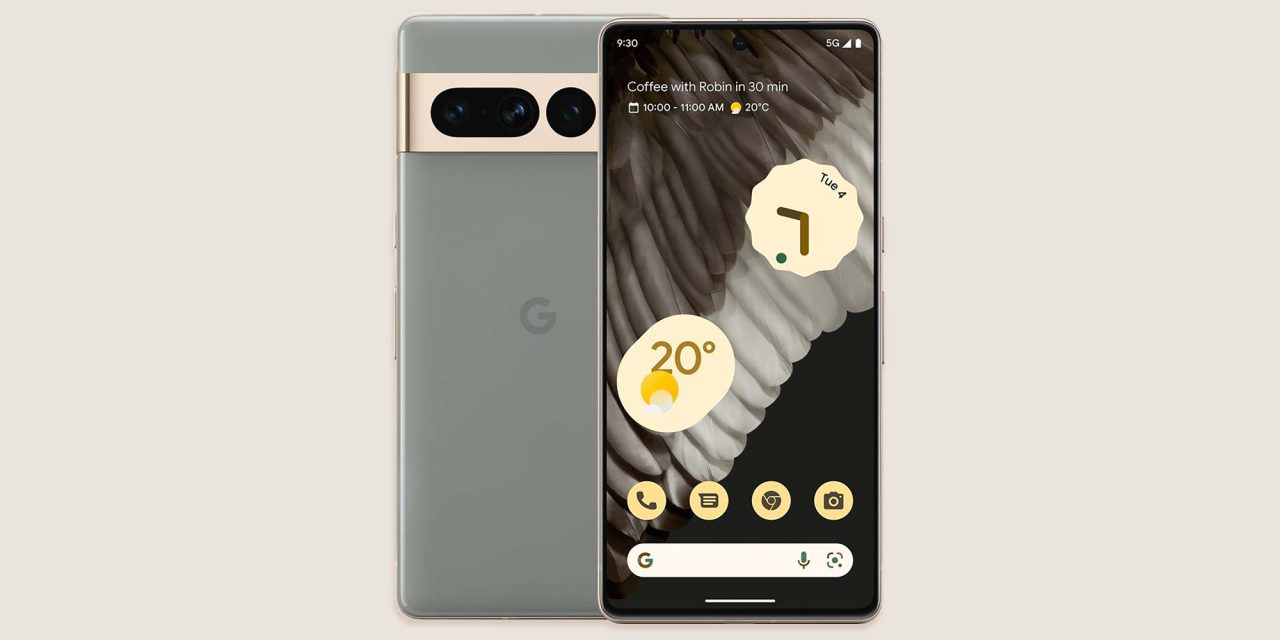 At the latest Made by Google launch event, Google has fully detailed the Pixel 7 Pro following a number of early looks, leaks, and teases. Entire device specifications, new features, and pricing are now official for the late-2022 flagship Pixel.

Coming with a 6.7-inch QHD+ screen, the Pixel 7 Pro treads familiar territory with a 120Hz refresh LTPO (Low-Temperature Polycrystalline Oxide) that can dip as low as 10Hz in specific scenarios. A less pronounced curve at the edges of the display also helps decrease the bezels from a visual perspective. Google says that the screen has a 20% higher peak brightness, which will help when viewing in brightly lit environments. The OLED retains a Gorilla Glass Victus glass panel which is the same material as used on the Pixel 6 Pro.

Google has made changes to the “Camera bar” design that was introduced with the Pixel 6 series last year. A polished anodized aluminum frames now encapsulate the camera with cutouts for the triple-lens configuration found at the rear of the Pixel 7 Pro. An IP68 water- and dust-resistance rating is also present to ensure that ingress protection is available. Measuring in at 162.9 x 76.6 x 8.9 mm, the Pixel 7 Pro weighs 212g.

With an expanded zoom range on the telephoto lens, the Pixel 7 Pro is capable of “Super Res Zoom” at up to 30x with electronic and optical image stabilization included. Laser detect auto-focus (LDAF) is also present on all three lenses.

Camera software includes a number of familiar features including “Magic Eraser,” “Face Unblur,” and “Real Tone.” New “Macro Focus” functionality lets you get closer to subjects and unveil detail without needing a dedicated macro camera onboard.

On the video front, you can record up to 4K60 on all cameras including the selfie camera for the first time. camera. New camera features include “Cinematic Blur,” which applies software-based bokeh effects and mimics Apple’s Cinematic and Samsung’s Live Focus video modes.

The second-generation Tensor G2 is at the heart of the Pixel 7 Pro, which offers minor performance improvements over its predecessor. Built upon a 4nm manufacturing process, it utilizes three core (2+2+4) clusters, Tensor Processing Unit (TPU) for machine learning, and Titan M2 security co-processor. Software-based Face Unlock is also available in tandem with an in-display fingerprint scanner. Unlike on Pixel 4, there is no 3D face scanner found on the Pixel 7 Pro.

Alongside the updated Tensor G2, the Pixel 7 Pro includes 12GB of LPDDR5 RAM with 128/256 or 512GB of UFS 3.1 storage also available (region dependent). Pixel 7 and Pixel 7 Pro also come with free access to the VPN service from Google One at a later date. Normally requiring a subscription to the $9.99/month 2TB plan, Pixel 7 owners will have access to Google’s secure VPN, encrypting your traffic to protect it from attackers.

Android 13 come pre-loaded with upgrades to Material You and Dynamic Color theming, which was introduced with Android 12 last year. Improvements include a combined “Security & privacy” menu that fuses on-device and account settings. Other highlights include an improved Photo picker, per-app language controls, plus much more. Pixel 7 Pro is guaranteed five years of security updates with three OS upgrades set to be offered.

The Pixel 7 Pro comes in Obsidian (black), Snow (white/silver), and Hazel (green/gold). Pre-orders open today at the Google Store in 17 countries with devices shipping from October 13.