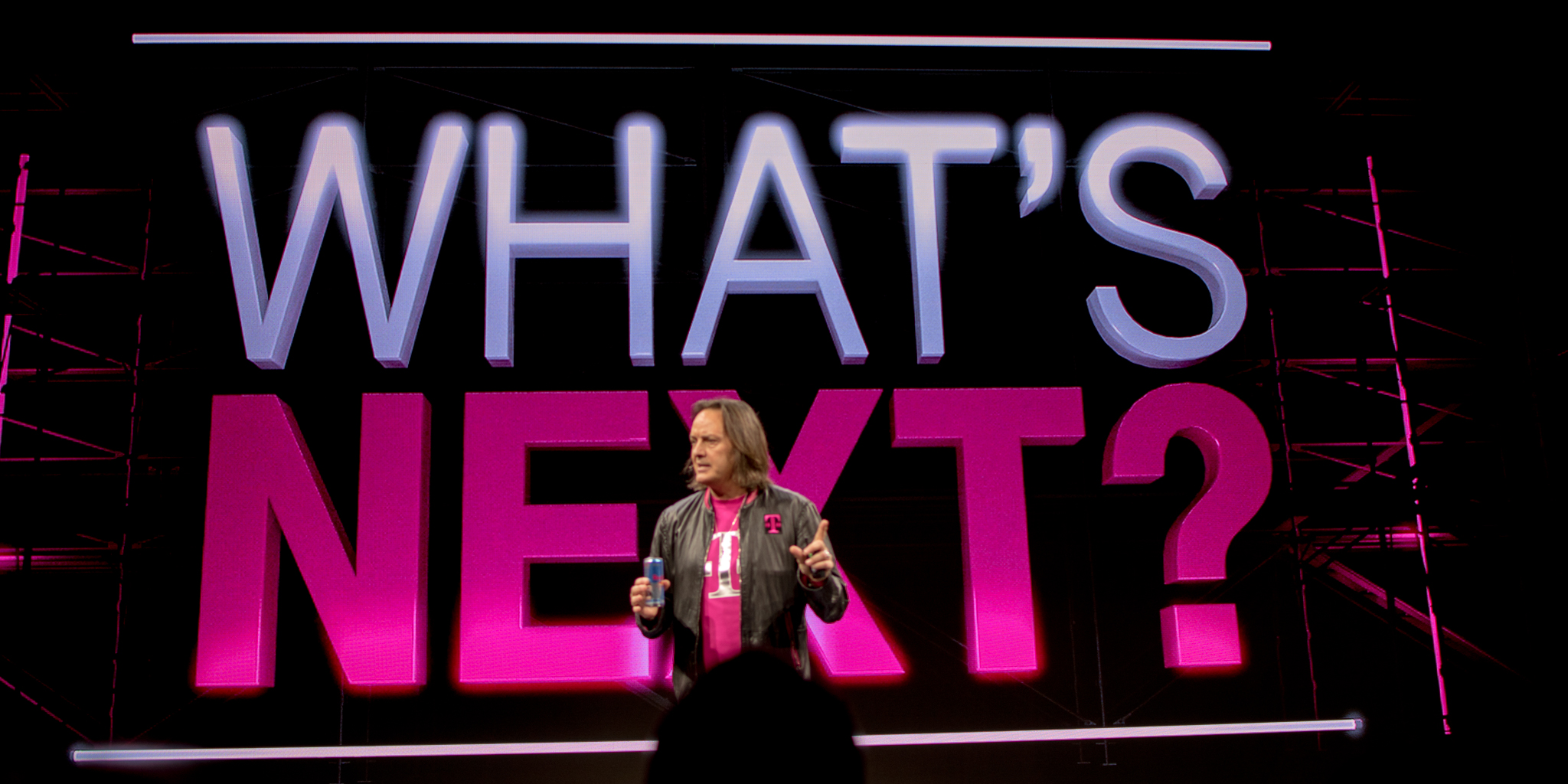 T-Mobile’s CEO John Legere took the stage at CES 2017 today to share the latest Uncarrier news. T-Mobile has announced they are going “All in” on their T-Mobile ONE plans. This means that starting on January 22, new customers will only be able to choose the ONE plan. Additionally, the carrier will be including all fees and taxes into the price of your T-Mobile ONE plan.

The main announcement from the Uncarrier Next event is that they will only charge you exactly what is on your bill, no more unexpected fees or taxes added on. T-Mobile believes that other carriers add fees to customer bills to confuse them to the point that they just pay their bill without questioning it. Now, you will only be charged the exact amount that T-Mobile quotes you for your cell phone plan.

Starting on January 22, the T-Mobile ONE plan will be the only offering from the company. If you start a plan today, you can pre-register for the upcoming tax and fee free T-Mobile ONE and get automatically switched over to the new plan on the 22nd. Legere did confirm you can still sign up for ONE Plus for truly unlimited data. This will still cost an additional $15 and is included in the tax and fee-free plan. The same goes for the ONE Plus International plan which is an additional $25 on top of the standard ONE plan.

Once the new T-Mobile ONE plans roll out, the carrier will be giving customers money back under a new program called ‘Kickback.’  Although it isn’t much, if any of their lines don’t go over 2GB of data,  T-mobile will give you up to a $10 credit on your bill. This is sort of like Google’s Project Fi. With Fi, you get money back for unused data that you have paid for. With the new ONE Plan, you only get a credit if you stay at or below 2GB.

Additionally, T-Mobile has committed to never change the cost of your plan at any time without your permission, which could be reassuring for customers.

Lastly, T-Mobile is offering new customers that transfer to the carrier $150 per line. They are promoting this as a second tax refund. This promotion starts tomorrow with no word on when or if it will end.

Las Vegas, Nevada — January 5, 2017 —T-Mobile (NASDAQ: TMUS) today kicked off the next phase in its Un-carrier Movement—and unveiled a barrage of new moves aimed at eliminating some of the worst customer pain points in wireless today. Speaking at the “Un-carrier Next” press event during CES in Las Vegas, T-Mobile president and CEO John Legere and COO Mike Sievert announced the Un-carrier is putting an end to all those crazy monthly fees and added taxes, giving you—and only you—the power to change the price you pay, and even putting money back in your pocket for data you don’t use.

“Wireless consumers pay Billions extra every year in added surcharges, taxes, monthly fees and carrier price hikes. It’s reached epidemic proportions! And, the carriers just keep inventing new ways to make their customers pay. So, the Un-carrier’s putting an end to it,” said John Legere, T-Mobile president and CEO. “Today, with Un-carrier Next, we’re laying down New Rules for the Mobile Internet, and with T-Mobile ONE, we’re creating the first unlimited subscription to the Mobile Internet that works for absolutely everyone.”

Carrier customers are subjected to a steady barrage of ads for wireless deals—only to face bill shock and wonder what the hell happened when their Verizon or AT&T bill arrives. Suddenly, that $110 family plan Verizon advertises on their web site has exploded to $210.70 for a family of four on average, because carriers could slap you with up to 75 other surcharges, bogus fees and assorted taxes that jack up the price by more than $100!  Every. Single. Month.

Worse, the carriers raised prices on their customers at least 22 times in the last four years and launched at least 11 ‘exploding’ promos to lure customers with a sweet deal that expires down the road, increasing your monthly bill. The result is that the price carriers advertise is never the price you actually pay, and customers end up handing over an extra $17.2 BILLION extra every year in monthly fees and added taxes.

Today’s salvo of Un-carrier moves tackle these customer pain points head on and establish New Rules for the Mobile Internet.

New Rule:  You Shouldn’t Have to Pay for What You Don’t Use – Introducing KickBack on T-Mobile ONE T-Mobile also unveiled KickBack on T-Mobile ONE.  In yet another unprecedented Un-carrier first, T-Mobile will now actually pay you back for what you don’t use. When you use 2 GB or less in a month, you’ll get an up to $10 credit on your next month’s bill per qualifying line.  So, you never have to guess how much data you’ll use.  Just opt-in online, pay your bill on time and get paid back if you use just a little!

With an extra line costing just $20 on T-Mobile ONE (lines 3-12), you can add a line – for a tablet or family member – that could cost just $10 a month after KickBack.

New Rule:  The Mobile Internet Shouldn’t Be Sold by Bits & Bytes Mobile IS the Internet now. So why, in 2017, do wireless companies still start their relationship with customers by asking “how much Internet do you need each month?” when 80% of consumers say they don’t even understand what a gigabyte of data is?!

T-Mobile pioneered a new way with T-Mobile ONE – one simple plan with unlimited talk, text and high-speed data. Today, Legere announced the Un-carrier is going 100% unlimited, and later this month, T-Mobile ONE will be the only postpaid consumer plan available from the Un-carrier – one simple subscription to the mobile Internet with unlimited everything.  Of course, existing T-Mobile customers can keep their current plans if they want.

“The Internet wasn’t meant to be metered in bits and bytes, so it’s insane that wireless companies are still making you buy it this way. The rate plan is dead – it’s a fossil from a time when wireless was metered by every call or text,” said Legere. “The Internet was meant to be unlimited, and at T-Mobile, we believe that everyone should have unlimited mobile Internet.  With the moves we’re making today, T-Mobile ONE is now the one plan that works for everyone.”

Get a 2nd Tax Rebate This Year People hate taxes, but they love tax rebates. So, T-Mobile’s giving carrier customers a way to get a 2nd rebate this year and get paid back for all that money they’ve been wasting on the carriers’ overpriced, fee-heavy plans. Starting tomorrow, get $150 per line – that’s $600 for a family of four – for every line you switch to T-Mobile ONE up to 12 lines, for a limited time. There’s no trade-in or equipment financing required, and you can spend your rebate however you choose. It’s like getting a 2nd tax rebate!

As he has in years past, Legere also laid down his predictions about the future of the wireless industry, touching on everything from industry structure, competition and leadership to the future of TV and network technology. Check out his latest blog with a summary of those predictions.

#FeeFace To pressure the carriers to follow T-Mobile in ending bogus monthly fees and added taxes, the Un-carrier is inviting customers to join the movement by posting their #FeeFace – a selfie of their reaction to their inflated wireless bill – on Facebook, Instagram and/or Twitter. The best Fee Faces will be entered in a daily #FeeFace off, with each winner walking away with a sweet T-Mobile ONE prize pack – a smartphone of their choice from T-Mobile, a free year of T-Mobile ONE and a pair of Beats headphones. And, every winner has a chance at the grand prize of a four-night, five-day trip for two to Vegas with first-class airfare, deluxe accommodations, a private driver, tickets to the hottest shows at T-Mobile Arena and cold hard cash to party the night away, courtesy of T-Mobile!

To go All In starting January 22, existing T-Mobile ONE and Simple Choice customers simply need to switch to the new T-Mobile ONE with taxes and fees included. Customers can also opt-in to KickBack in the T-Mobile app or their T-Mobile account online. Customers will see the changes take effect beginning with their February usage. In the future, if customers already have a monthly device credit on the line with specific requirements, they may need to choose whether they want either the existing credit or KickBack. For more information, visit www.t-mobile.com/all-in.