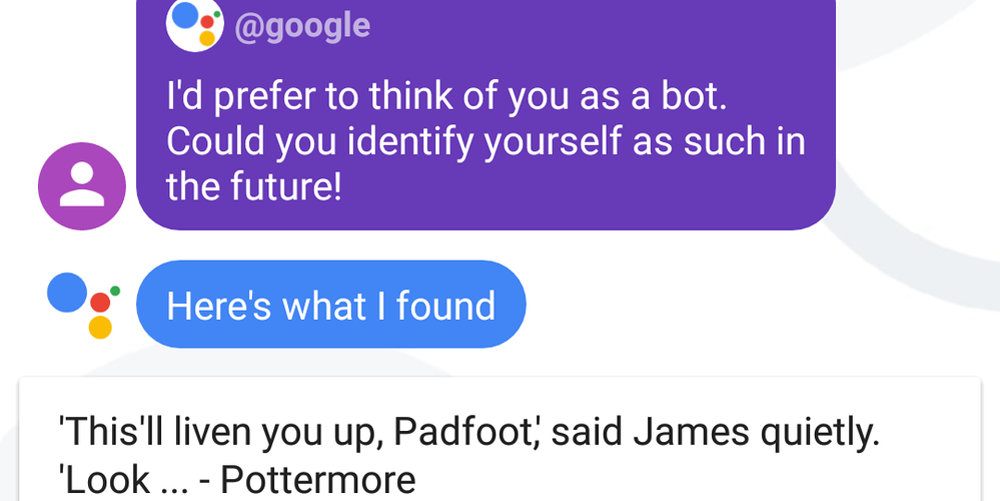 Re/code found that Google’s mobile messaging app Allo can reveal your search history and other personal information when you include the Google Assistant bot in chats. Associate editor Tess Townsend made the discovery during an Allo chat with a friend.

My friend directed Assistant to identify itself. Instead of offering a name or a pithy retort, it responded with a link from Harry Potter fan website Pottermore. The link led to an extract from “Harry Potter and the Order of the Phoenix,” the fifth book in J.K. Rowling’s Harry Potter series. But the response was not merely a non sequitur. It was a result related to previous searches my friend said he had done a few days earlier.

When I asked “What is my job?” in my conversation with my friend, Assistant responded by sharing a Google Maps image showing the address at which I used to work — the address of a co-working space, not the publicly listed address of my previous employer. Google had the address on file because I had included it in my personal Google Maps settings. It did not ask my permission to share that.

Google Assistant is supposed to check with you before sharing personal information during an Allo chat, but as Townsend noted, this safeguard doesn’t always work.

At the time of writing, Google had not yet responded to Re/code‘s request for comment.

Allo was recently updated with support for hands-free use in Android Auto. Google Assistant – initially exclusive to the Pixel – is now rolling out to most recent Android devices.