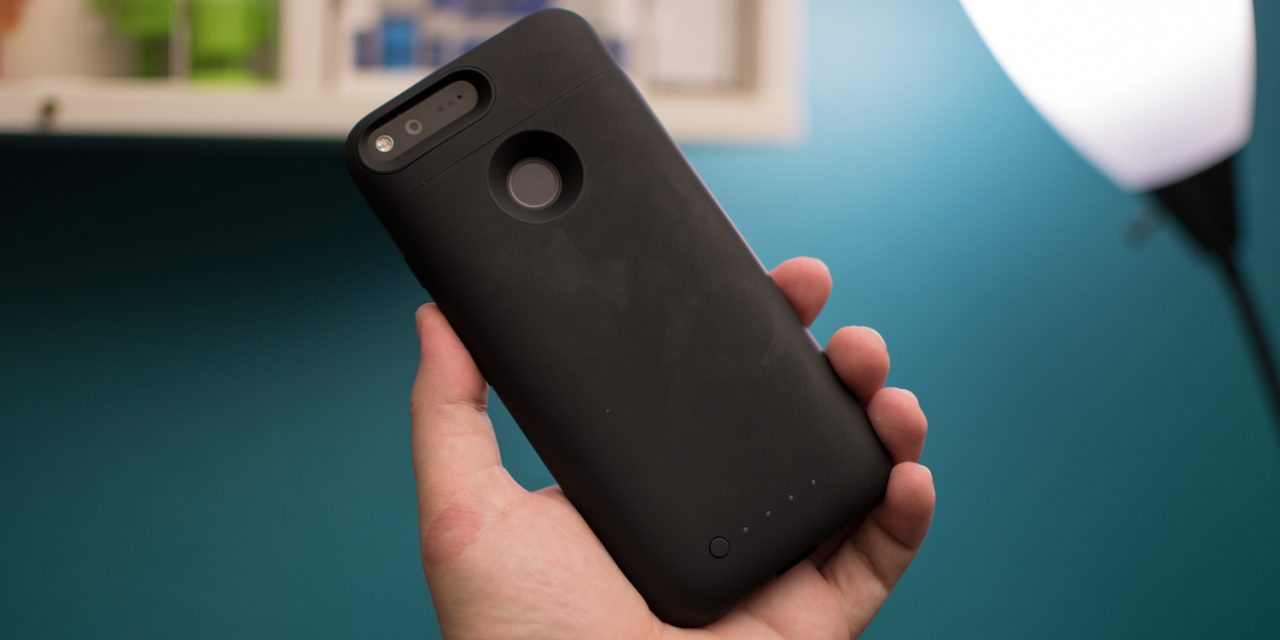 Despite being a rather popular Android smartphone, there aren’t as many great cases available for the Google Pixel as there are for the Galaxy S8 or LG G6. Although late to the game, Mophie has finally released a version of its Juice Pack battery cases for the Pixel XL. The Juice Pack does add a bit of thickness to the handset but it also almost doubles its battery life and adds wireless charging.

When you get the Mophie Juice Pack, it comes in a pretty standard black package with an image of the case on the front and a list of its features around back. Opening up the packaging and you will find the battery case and nothing else. Instead of providing their own charging cable, Mophie recommends you just use the OEM cord that came with the Pixel XL.

The case itself is pretty simple. Constructed out of a hard plastic with a soft-touch top layer, the Juice Pack feels premium in hand and is something that should protect your smartphone from “drops and hard falls. Featuring what Mophie calls a “low-profile design,” the case itself is pretty flush to the front display of the phone. There are small lips that rise from the case that does protect the forehead, chin, and corners of the Pixel XL.

Around back is where you can check the case’s battery level as well as turn the Juice Pack on. Near the bottom, there are four small LEDs positioned next to a power button. Just pressing down on the button for a second will show the Mophie’s charge while holding the button down for three seconds will either turn the case on or off.

Inserting the Google Pixel XL into the Mophie Juice Pack couldn’t be easier. Simply pop the top section off of the case (this does take a little brute force) and then slide your Pixel XL into it. Once you’ve snapped the top part back on, your Mophie battery case should be good to go. Don’t worry, there’s still a large opening for your headphone jack, and the power and volume buttons are still plenty responsive.

While my experience may differ from yours, I rather enjoyed having the Mophie Juice Pack on my Pixel XL, though there are some setbacks. The first and most obvious one is the additional size this battery case adds to the handset. As the Juice Pack holds a 2,950mAh battery, it roughly doubles the thickness of the Pixel XL. This wasn’t a dealbreaker for me, but it did definitely make it harder to fit into my pocket.

This added thickness also made using the fingerprint sensor a little more challenging. While it is now even easier to find the sensor, you have to hold the entire setup slightly higher in the hand so that your finger can reach all of the way in.

My second complaint is with the case’s exterior, soft-touch material. While nice in hand, it does tend to pick up fingerprints and oils from holding the phone. This isn’t the worst thing in the world but, like you can see from this post’s top image, fingerprints and oils are pretty noticeable, even after wiping the case off.

What I really love about this case is the way it charges the Pixel XL. First, there’s the case itself. When turned on, the battery case is putting out enough juice to fast charge the handset. When the entire setup is plugged into the wall via the USB Type-C port located at the bottom of the Mophie, the case smartly fully charged the device first before replenishing its battery.

So would I recommend the Mophie Juice Pack? Yes, if you’re someone that either always needs more juice at the end of the day or just wants to use their Google Pixel XL for more than one day. While the thickness of the case can be a bit much to handle, the added battery life and wireless charging might be enough of a reason to pick this case up.

If you’re interested in purchasing the Mophie Juice Pack for the Google Pixel XL, it is available right now from Amazon or Mophie’s online store for $99.95. Additionally, this battery case is being sold in some of Verizon’s retail outlets, but the cases aren’t always in stock.