Google hires new VP of diversity, says making progress on hiring but ‘clearly much more to do’ 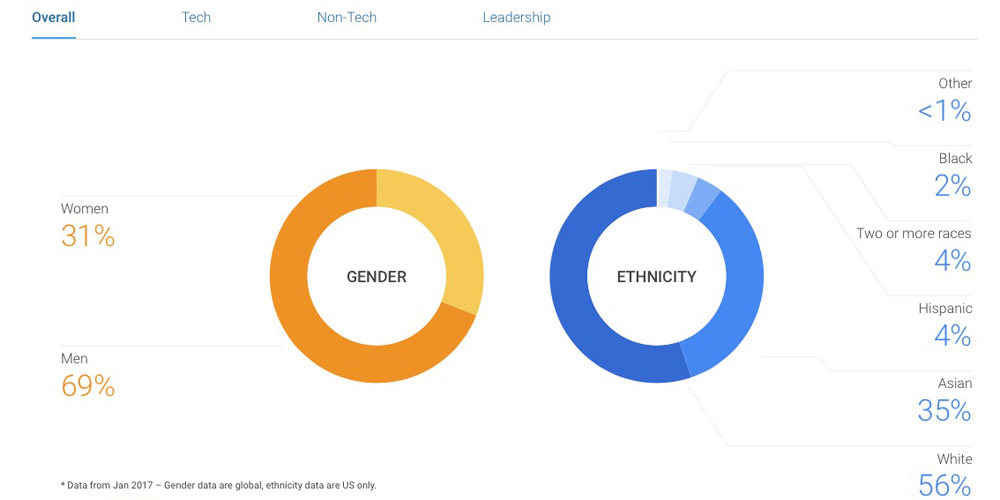 Google has published its latest diversity report, saying that it is ‘making progress’ on a more diverse workforce but recognizes that there is ‘much more to do.’ It has announced a new hire to help it do so.

To push our work forward, we’re thrilled that Danielle Brown will be joining Google as our new Vice President of Diversity. She’ll start in July, and comes with the deep conviction that Google provides a platform where she and the team can make a real impact internally and across the tech industry.

The company’s overall workforce is 69% male, 56% white and 35% Asian. Hispanics and mixed-race employees make up just 4% each, while black workers account for just 2% of the total.

The situation is worse when you look at higher-paid tech employees, where 80% are male and just 1% black. The position in leadership positions is similar.

The progress touted by the company is slow, with the company highlighting a 1% increase in four metrics: Hispanic employees, black employees in tech roles, women in tech positions and women at a leadership level.

Black Googlers still make up only 1 percent of our technical workforce, and we’re working to change that. Sponsored by Google vice president Bonita Stewart, we recently launched Howard West, a three-month engineering residency on our campus for Howard University computer science majors. Our Google in Residence initiative, which embeds Google engineers at historically black colleges and universities (HBCUs), is continuing into its sixth year this fall.

The company first started sharing diversity data back in 2014, when it said that it was miles from where it wanted to be.

The Department of Labour sued Google earlier this year for refusing to hand over pay data for an anti-discrimination audit, with the company recently giving three reasons for its refusal to do so.