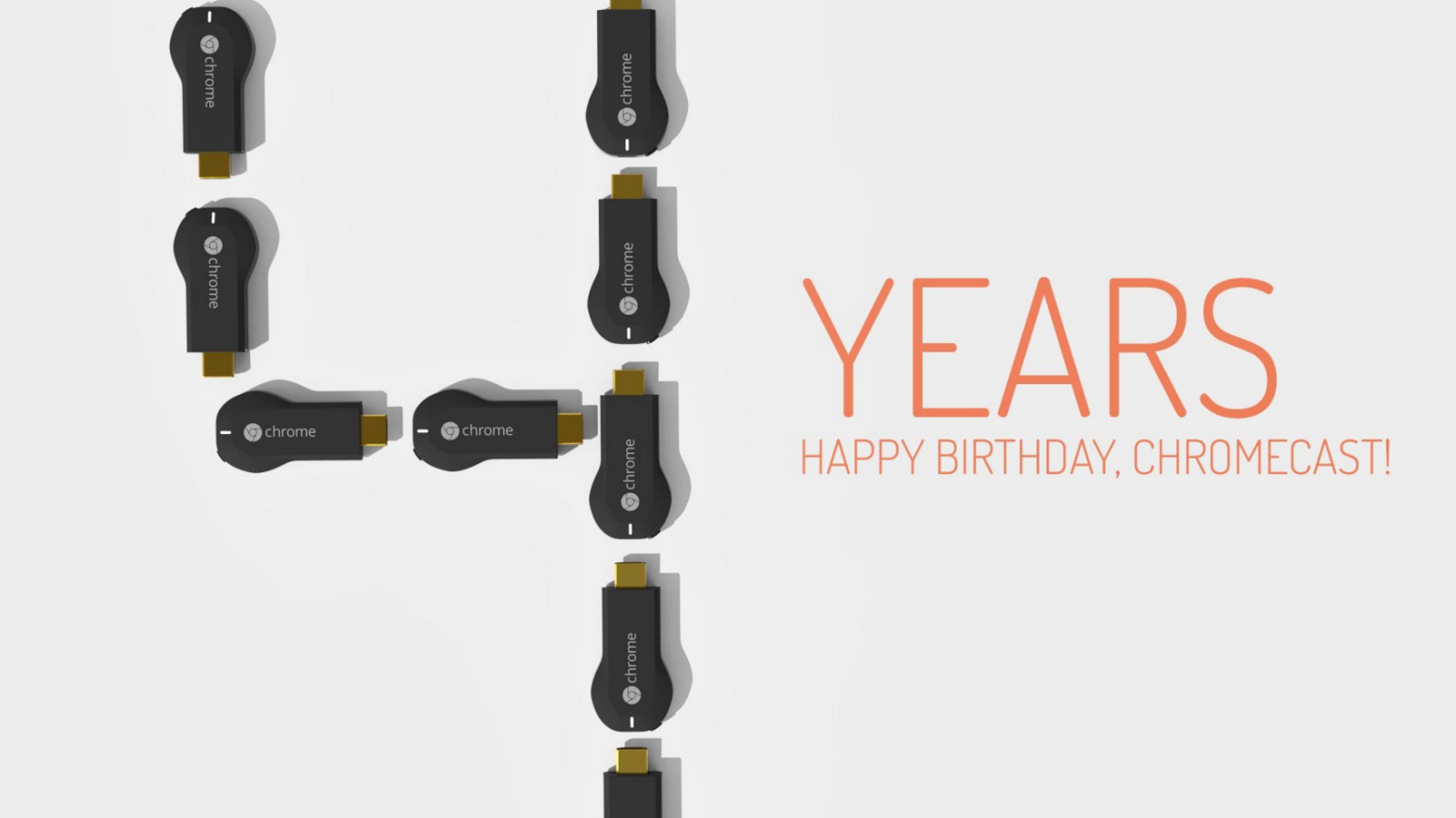 Exactly 4 years ago today, Google officially unveiled Chromecast to the world. The accessory was marketed as a tiny HDMI dongle that we were supposed to plug into our TVs in order to more easily watch YouTube and Netflix videos, as well as to stream Chrome tabs to the big screen from our computers. Chromecast was a breed all of its own, and as funky and weird as it was back in 2013, it’s rapidly changed the way that millions of people consume media…

The ultimate catalyst of media streaming

Prior to the Chromecast’s release, media streaming boxes took the form of the Sony Internet Player, the Belkin TVPlus, and the Western Digital TV Live. These products allowed you to stream online and local video files to your television, and while they might have worked, they were often plagued by three main issues: 1) Big, bulky designs, 2) Confusing user interfaces, and 3) High price tags.

The Chromecast didn’t have any of these issues.

Google made the Chromecast extremely compact, eliminated any chance for a confusing UI, and sold it for a ridiculously low price at just $35.

Just one year after the Chromecast had been on store shelves, Google reported that it had sold millions of units and that it was the best-selling device for media streaming in 2014.

Unlike other media streaming devices of that time, Chromecast just worked. You plugged it into your TV, connected it to your Wi-Fi network, and watched TV shows, movies, and more by simply sending them from your phone, tablet, or computer to the television.

Since the Chromecast’s release, we’ve seen very similar offerings from some of the biggest competitors in the media streaming market, including the likes of the Roku Express and Amazon’s Fire TV Stick. These products have proven themselves to be worthy contenders in the streaming marketplace, but when it comes to sheer simplicity and ease of use, Chromecast still takes the cake.

Why use two user interfaces when you only need one?

Along with its small size and low price, one of the most talked-about features of Chomecast when it was launched was the way that it handled the actual streaming process. Unlike all other media boxes at that time which forced you to navigate through poorly laid-out menus and and apps to find what you wanted to watch, Google axed this in favor of a simpler setup – casting.

Google introduced “casting” (briefly rebranded as Google Cast and then back again to Chromecast) with the first-gen Chromecast, which as you probably know is the process of opening an app on your phone, touching the Cast icon so it can connect to your Chromecast or Android TV, selecting a video you want to watch, and viewing it on your TV. This is a process that most consumers are familiar with now, but it was a brand-new system just 4 short years ago.

Casting could have easily flopped, but it didn’t because Google knew that it needed to be as simple as it could be. Want to watch Netflix on your TV? Rather than having to make sure you’ve got a streaming box that supports the Netflix app, just open the Netflix app you already have on your phone, touch the Cast button, and start viewing your content immediately.

Chromecast in its current state and looking towards the future

Since its debut 4 years ago, Chromecast hasn’t shown any signs of slowing down. Google followed up the original Chromecast with a fresh design and brand-new audio-centric solution in the form of the Chromecast Audio in 2015, and last year we saw the release of the Chromecast Ultra with support for 4K HDR streaming for just $69. Google still actively promotes the Chromecast lineup on the Google Store, and seeing as how 30 million Chromecast devices had been sold by July 2016, it’s apparent that consumers are still very interested in the product too.

Now, in 2017, we have the $69 Chromecast Ultra for 4K streaming, the $35 Chromecast for cheap, Full HD streaming, and the identically-priced Chromecast Audio for casting your music to any speaker setup with a 3.5mm headphone jack. It seems like Google has all of its possible bases covered, so where does Chromecast go from here?

At this point in time, there’s not a lot that Google can do from a hardware stance with Chromecast, and that’s okay. The Chromecast and Chromecast Audio are both nearing 3 years of age, and they still work perfectly fine. Heck, even my original Chromecast from 2013 still works just the way I need it to.

Google will likely release small hardware refreshes here and there when needed, with updated processors and designs, but at its core, Chromecast isn’t about the hardware – it’s about the casting feature itself.

Since the debut of Chromecast 4 years ago, we’ve seen Chromecast capabilities baked into Android TV boxes, a myriad of smart TVs, Bluetooth speakers, and even Google Home. Chromecast will likely stick around for some time to come as an inexpensive way to update older hardware with Chromecast features, but going forward, Google’s main focus will and should be on integrating casting support on as many other gadgets and gizmos as it can.