Last year I said that the first Google Home was a great start, but not yet functionally up to par with the comparable offerings from Amazon. Google has all but caught up since then. The feature set of the original Google Home is fleshed out — it works with just about as many third-party services as you could want — and now Google has introduced a smaller, cheaper Home to take on the Echo Dot.

The short version is this: The new Google Home Mini joins the Chromecast as another impulse buy in Google’s hardware lineup.

The long version is that Google Home Mini is pretty much just a smaller, cheaper version of the Home. It does literally everything you can do on your standard Google Home, like automate smart home controls, play stuff on your TV, listen to Spotify or YouTube Music, set timers in your kitchen, and more. It just has a smaller, crappier speaker, a smaller size, and a smaller price.

The big difference you’ll notice with the Google Home Mini is that, well, it’s small. It’s about the size of a donut, and it fits in the palm of your hand. The design is just very homey and minimal, and you’ll probably forget about it entirely once you place it in your room.

And it seems like that’s kind of the point. Google took note at its event on October 4th that its design is inspired by the look and feel of your home, and that’s why the top of the new Home Mini — in three different colors — is made of a soft fabric. It’s basically the nicest looking electronic hockey puck ever. 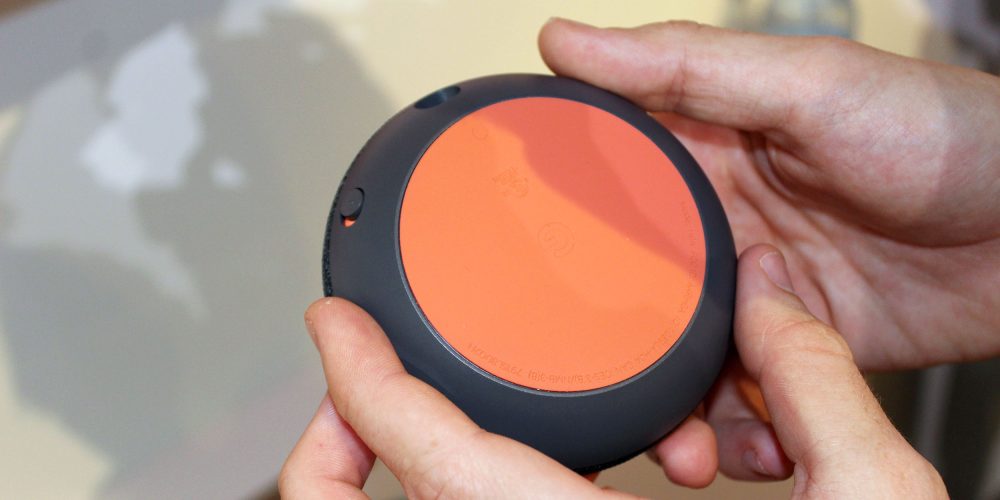 Even with its smaller size, the Home Mini only makes one big compromise — its speaker. The rest of the functionality of the Google Home is all there. It has a touch-sensitive top for controlling volume and activating the Assistant without using the hot word, a switch on the back for completely disabling the microphone when you want, and — unfortunately — a microUSB port for power.

But about that speaker. Rather than a complete replacement for the original Google Home, I’d say the Home Mini is more complimentary to the other Google Home devices you have in your house. If you have a Google Home (or maybe a Home Max) in one living space, you could put a Home Mini in every other room to extend the Assistant’s reach throughout the house.

The speaker is quieter, tinnier and less full, and basically just not that good. It does have “360-degree sound” (as Google has tried to position it), but really you should just think of it like a single up-firing mono speaker that does its job and nothing more.

Basically, you’re not going to want to listen to music or enjoy media on this thing. Perhaps “my day” (the feature on Home which tells you about what’s going on for your day ahead) would be fine, but I wouldn’t say this would be a great replacement for the original Google Home (which is about twice the price) if you want to have a speaker for listening to Spotify or the like while cooking.

The big story with the Home Mini, though, is really just the price. When the Chromecast launched, it was a great thoughtless impulse buy that brought an immense amount of intelligence and technology to outdated televisions. I’d say the Home Mini is basically the same — but instead of bringing smart casting to your TV, you get a smart Assistant in any room in your house.

If there’s even one function of the device that really compels you — like getting the weather first thing when you wake up, or being able to quickly find your phone — then the Home Mini is just simply a no-brainer. I’d pay $20 or $30 for a standalone single-function device that just makes one tiny piece of my life easier, and the functionality of Home Mini is just too extensive to ignore at $49.

It’s a half-decent mini speaker, it’s cheap, and it does everything that last year’s $129 Google Home does. There’s just not much else to say. Before today, there was one Google hardware product that I recommended to literally everyone: Chromecast. At $35, it just doesn’t make sense to own a TV (that doesn’t already have Chromecast built-in) that doesn’t have one attached to its HDMI port.

At $49 (and free if you pre-order a Google Pixel 2, or free if you manage to snag one at one of Google’s pop-up donut shops, and assumably maybe even down to $29 or $39 in the coming months at retail), there’s pretty much no reason not to make every room in your house a smart room. Plug the thing in, set it up in the Google Home app, and be able to say “Ok, Google” from anywhere.