A photo of a Google Pixel 3 XL prototype leaked earlier today, showing its notch-and-chin design, its ‘crosshatch’ code name, and the first look at what seems to be an all-glass back. If you had any doubt in your mind that it’s a real Google prototype, then I think those doubts can be settled. I found the mystery placeholder logo on the device’s back on an official Pixel 2 prototype from last year.

Earlier this year, in an interview with the Managing Editor of Google’s own internal blog, The Keyword, Google’s Ivy Ross discussed leading the Made by Google design team. In the same post, she showed off some early iterations and prototypical designs of the Pixel 2 and a handful of other devices like the Google Home Mini and the Pixelbook.

Of course getting to see Google’s design process and iteration on its flagship smartphone was the most interesting part, showing a variety of concepts, colors, and component layouts that very well could have made it into the final design. Off to the right side of that image, though, is the main event. You can see what appears to be a Pixel 2 in a blue color that looks really similar to “Kinda Blue”.

If you zoom, enhance, zoom, and enhance even more, you’ll spot a curious and unique prototype logo that sits in the usual place of the G logo we all know and love. See below. 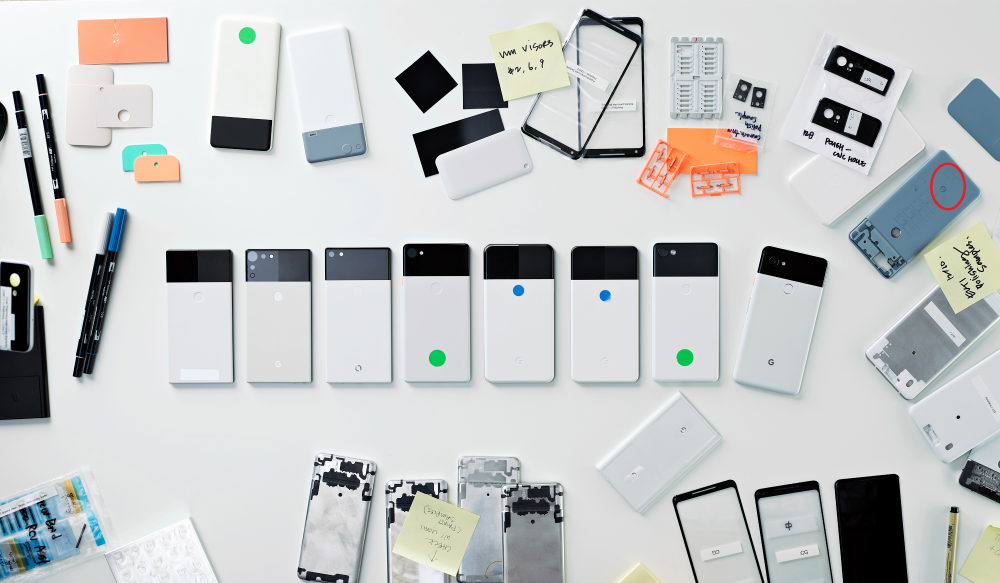 It just so happens that a very, very similar logo can be spotted on today’s leak of the Pixel 3 XL. It’s not exactly the same, mind you, but it’s similar enough that you wouldn’t even see the difference at first glance. The logo on the Pixel 3 XL has gaps on the top and bottom, while the Pixel 2 in this image only has a gap on the top. Bu that’s beyond the point. This is pretty much the same thing.

So, yes, while this leaked phone may or may not represent the final design of the Pixel 3 XL, the fact that it leaked at all would suggest that it’s likely pretty close to being final. And if this backside logo is pretty much identical to one we know came from a prior Google prototype, we can be almost certain that this is indeed yet another Google prototype. Ladies and gentlemen, your Pixel 3 XL.

Our Abner: “Are the green stickers meant to hide the same logo?”