In a recent server-side update, the albums and playlists page has been ever so slightly tweaked. The changes are confined to the top-third of the page that features album artwork and other controls.

Immediately underneath this box, there are now “Shuffle” and “Play” buttons. The former is filled in, while the latter just features an outline and replaces an animating FAB that used to shrink as you scrolled down the page.

In terms of usability, buttons with text are usually considered to be more straightforward and explicit, while the dedicated button to play songs out of order is much more convenient than going to the Now Playing screen and setting shuffle.

Meanwhile, this change results in YouTube Music rearranging several elements like who a playlist is by, and how many songs are included. Google removed the playlist length, but added a description underneath the Shuffle and Play buttons.

There is also one minor tweak to buttons on artist pages, with the right-most button adopting a hollowed out style as well.

This change is fully rolled out on YouTube Music for Android, and went into effect sometime over the past few days as part of a server-side update. Overall, the changes help with usability as Google tries to kickstart its music service to compete with the likes of Spotify and even Apple Music.

Update 10/19: YouTube Music now also features app shortcuts on devices running Android 7.1 and above. As of version 2.53, there are two to begin a “Search” and “Play Offline Mixtape.” Like other shortcuts, they can be dragged to your homescreen as individual icons for even quicker access. 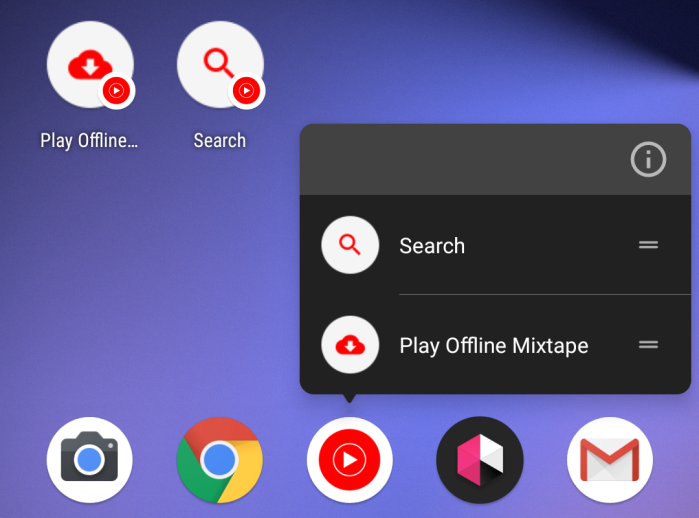