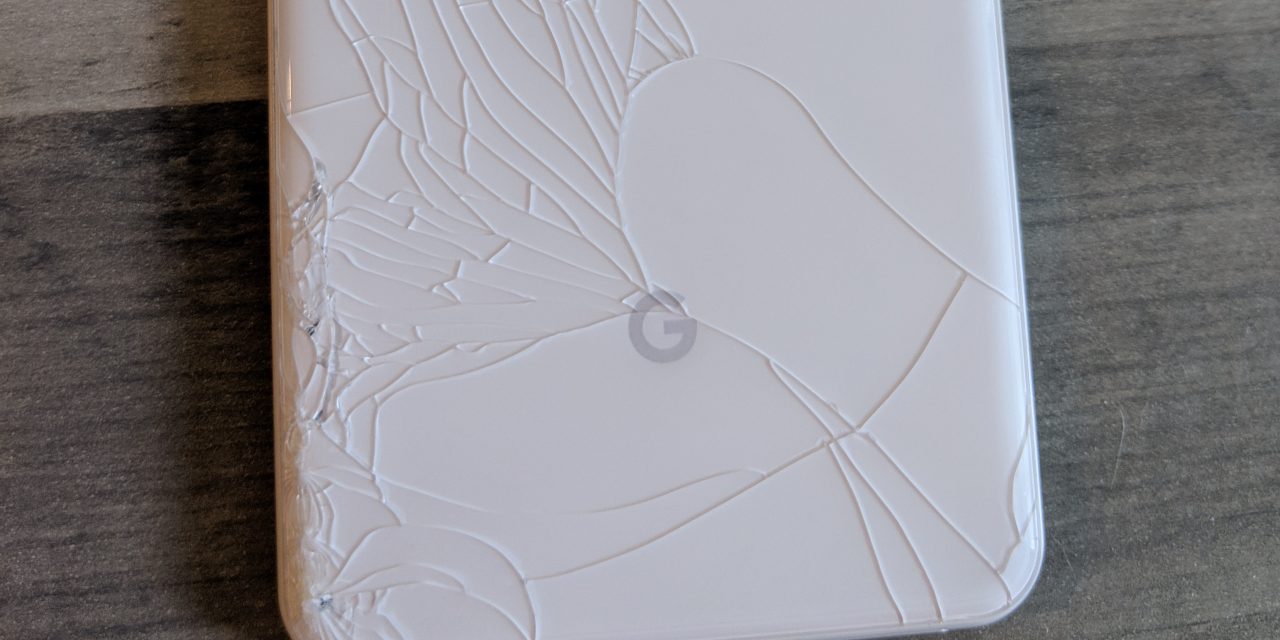 As my wife and I have discovered this week, Google and uBreakiFix simply aren’t ready to service broken Google Pixel 3 and Pixel 3 XL devices. Until they are, you might want to be more careful than usual to prevent what happened to us from happening to you…

This week, I got a terrible text message from my wife — the one that all owners of tech dread. Her Pixel 3 XL met concrete and made a bad first impression, shattering the back glass. The beautiful ‘Not Pink’ glass was now a shell of its former self. We were thankfully well-informed of our options for what to do about this, but it didn’t go so well.

The Google Store Repair Center page was our first destination, but as of this writing, it doesn’t claim to offer Pixel 3 or 3 XL repairs. Not a good sign. Faced with this, we immediately contacted Google Store Support to find out what to do next. After being given the full runaround, they finally passed us off, saying to contact uBreakiFix.

At the time, Google’s official out-of-warranty repair support page didn’t list any repair facilities for the Pixel 3, but since, uBreakiFix has been added to the list. They’ve long been partnered with Google, offering same-day repairs for the original Pixel and Pixel 2 phones. We have a nearby location in New Orleans, so that was the next destination.

We booked a repair appointment online and headed out. Before we arrived, the uBreakiFix store called to inform us that they do not yet offer same-day service, but would still need to assess the damage. After the assessment, they gave us a price of $110 and a promise to call us when the parts were in, likely within two weeks.

Today, three days later, we were instead greeted by a call informing us that uBreakiFix has no idea when the necessary parts will come in. The only Pixel 3 part they could get their hands on is the battery.

Long story short: Google isn’t fixing broken Google Pixel 3 and Pixel 3 XL units itself quite yet, and is instead sending people off to uBreakiFix. Our local uBreakiFix is currently out of stock and not even expecting to get repair components — except the battery — for the Pixel 3 or Pixel 3 XL for the foreseeable future. That means that my wife’s new phone is currently damaged without recourse. (Another national repair service, Puls, can also fix Pixel 3 devices, but currently only in San Francisco.)

Update: A uBreakiFix representative has reached out with a comment, clarifying the situation behind the delays, including the current method for stores to service devices.

In full transparency, there is temporarily a limited quantity of OEM Pixel 3 and Pixel 3 XL screens, and we expect to have these parts available at every uBreakiFix location for same-day repairs in the coming weeks. To clarify, uBreakiFix stores are currently able to overnight these parts from our distribution center, and that’s what you and your readers can expect until there’s adequate supply at every store, which will then enable us to provide same-day repair service for these devices. We’ve outlined this process to all of our stores, and we want to make sure your readers are aware that they can get their Pixel 3 and Pixel 3 XL devices taken care of.

It’s interesting to me that this is overnight delivery option was not mentioned by our local store, but it does line up with the positive uBreakiFix experience some readers have reported in the comments. Should you find yourself with a broken device, give your local uBreakiFix a chance, and mention the overnight capability if they don’t.

The uBreakiFix representative said they would update me on when same-day repairs would be available.

(To be clear, if you are having problems with your Pixel 3 that aren’t accidental damage and would be covered by warranty, Google’s customer service has been mostly fine with meeting that need for buyers — I’m talking about uncovered damage if that wasn’t obvious.)

All things considered, this is poor customer service for a company trying to sell a phone that’s made of fragile glass at a price that’s arguably a premium. Presumably this will be ironed out soon, but for now, it’s not a great time to be a Pixel owner who made this the all-too-common mistake. Put a case on your Pixel 3 or Pixel 3 XL if you don’t want this to happen to you.