Earlier this month, our APK Insight of Messages 3.9 revealed Google’s work on “Spam Protection” for Android’s default SMS/RCS client. The feature is now beginning to roll out for some users.

As spotted by Android Police, certain users are seeing a “New! Spam protection” prompt after opening Messages. This dialogue allows users to “Manage in Settings” and learn more at a Google Support page detailing how the functionality works.

It involves sending “some info about your messages” to Google, while “spam reports include a copy of the spammer’s messages (up to 10). However, your “actual content or your phone number” is not sent to Google as part of the report.

To help identify spammers, Google temporarily stores the phone numbers of people sending and receiving messages with you and the times they messaged with you, but does not store your phone number or the content of these messages. 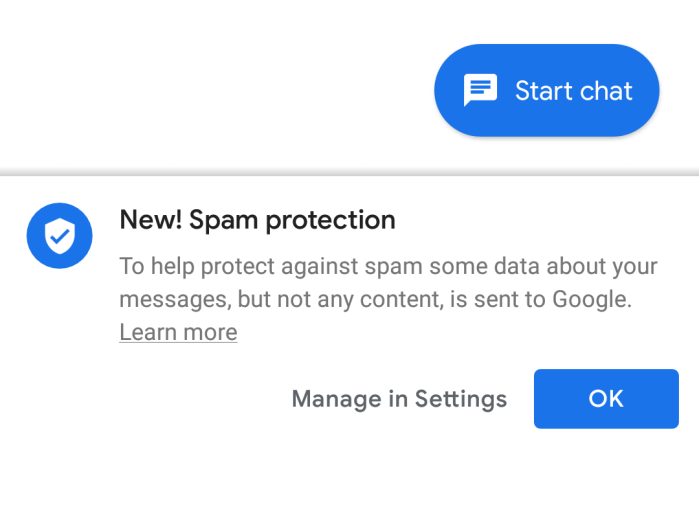 When rolled out, users can disable this feature by heading to Settings and then the Advanced menu. Under “Spam protection,” there is a toggle to disable the functionality. Data about spam messages is aimed at improving Google’s ability to “detect future spam for you.”

This feature compliments the existing ability to block a phone number, and a similar detection ability in the Google Phone dialer for Pixel and Android One devices. At the moment, Spam Protection is not yet widely available with Messages 3.9 and still requires a server-side update.

Following our reports on Hangouts classic and Allo in early December, Google reiterated how Messages is the company’s primary communication solution for consumers. Meanwhile, another change we just spotted suggests that the Messages web app will soon be a part of Google.com instead of Android.com.