Say goodbye? I say Allo: A brief look at the past, present, and future of Google messaging 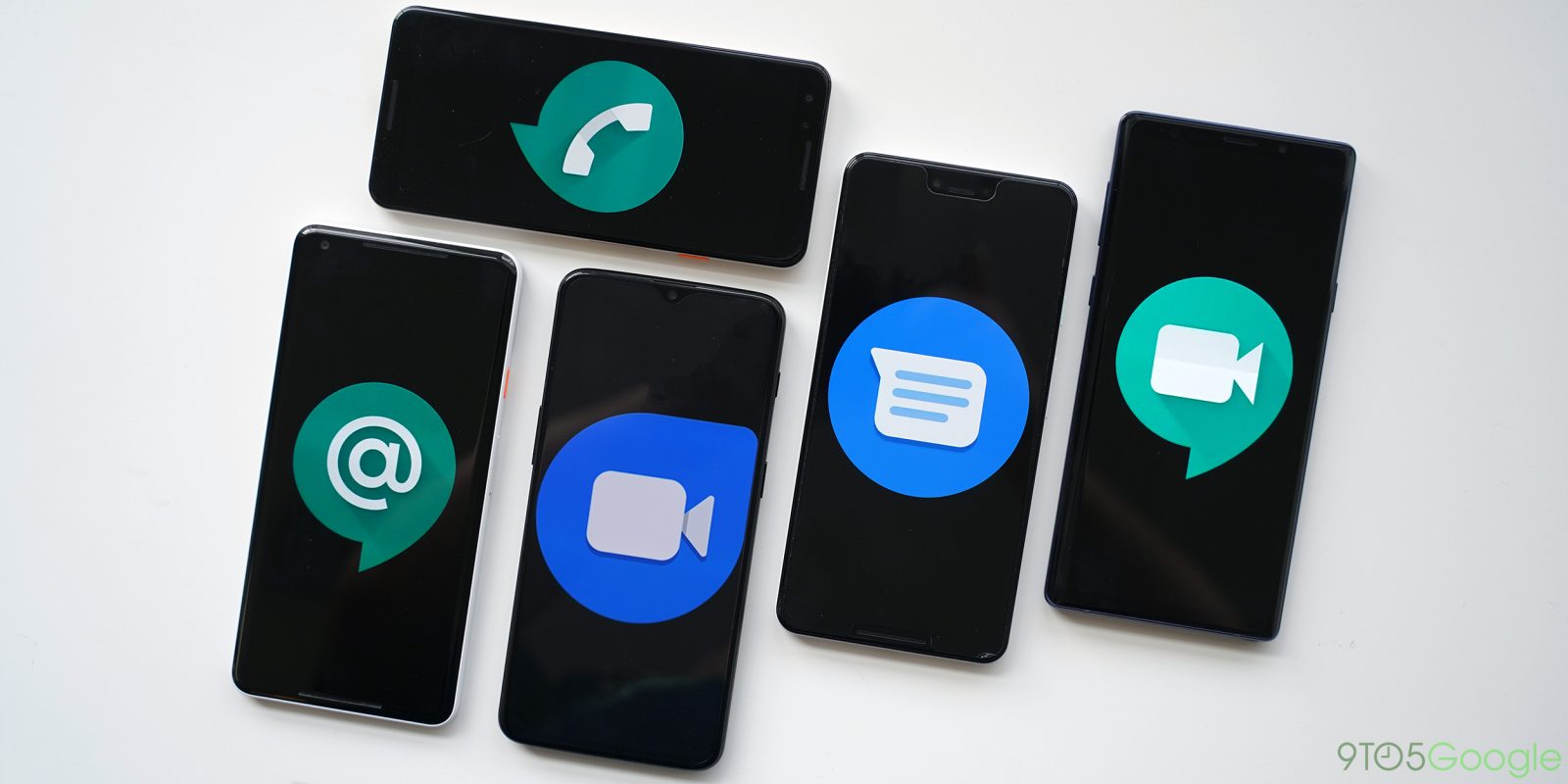 Over the past week, the narrative around Google’s messaging and communication services has been defined by a spate of planned deprecations — both of which 9to5Google first reported about. While older services will be “sunset,” the company’s vision for consumers hasn’t changed much since earlier this year, revolving around RCS “Chat” and Google Duo video calling.

However, complicating this dual-service future now is the newly-revealed fact that the enterprise-focused Hangouts Chat and Meet will also be available to consumers, and that Google Voice is still an active service. This is just the latest in Google’s tangled and sometimes incoherent strategy for simply saying “Hello.”

At I/O 2013, Google introduced Hangouts to serve as the company’s future messaging solution that predominantly replaced the beloved Google Talk — or “Gchat.” Confusingly, it was named after the video calling portion of Google+, but nevertheless it was an okay brand that communicated the primary purpose of the app.

With Hangouts, Google could point users to one app — especially on phones — for SMS/MMS and instant messaging, as well as video calling. Instead of disparate services, the company would just rally around one and build new features there.

However, three years later, this one app strategy broke down when Google introduced Allo and Duo at I/O 2016. While tied to a phone number, these apps only use your digits as an identifier to reach users. Messages and video calls are handled by a cloud-based service.

Allo is a smart messaging app that was many users’ first experience with the Google Assistant. The smart bot allowed users to ask questions textually in a somewhat conversational manner, while it could be usefully invoked within a conversation to provide answers to a group chat.

Another feature that debuted with Allo was Smart Reply. Google’s machine learning prowess was leveraged to analyze past messages and even images to come up with fast contextual replies. The other big area of focus was expressive features, like stickers, emoji, and a whisper/shout functionality where users could adjust the size of text.

While Allo was seemingly a grab bag of features, Google Duo was a much more focused offering. Its primary function was video (and later audio) calling, with Google optimizing quality for low-bandwidth networks. Knock Knock showed a live preview of you to the recipient, with the service eventually adding the ability to send video/audio voicemail.

Back then, Google said that Hangouts would remain and shift its focus to the enterprise, while consumers were advised to use Allo and Duo. Over time, it emerged that the new enterprise focus would manifest itself as Hangouts Chat and Hangouts Meet.

However, two years later, Google announced that it was “pausing investment” in Allo in favor of its Messages app and Rich Communication Services. RCS is the next-generation SMS/MMS replacement with modern features like sending high-resolution pictures and videos thanks to a cloud backend, read/sent receipts, and typing indicators.

Other features include larger group chats and the ability to send messages over Wi-Fi and mobile data. Aside from the standard, the Messages app already has other functionality like location and contact sharing, as well as Google Pay and a web app.

This functionality is par for the course in a modern messaging service, but the fact that it’s carrier-centered is problematic in a variety of ways. First and foremost, it is a remarkably Western-centered, if not US-centric, approach to messaging, with most users around the world adopting cloud-based instant messaging. Secondly, it lacks meaningful end-to-end encryption.

The specific implementation that Google and carriers are now beginning to adopt is called the Universal Profile. This allows interoperability and the ability for subscribers to leverage these features across different carriers.

Carriers around the world, including the big four of AT&T, Verizon, T-Mobile, and Sprint, plan to support RCS, while various OEMs have agreed to preload Google’s Messages app as the default RCS client for Android. 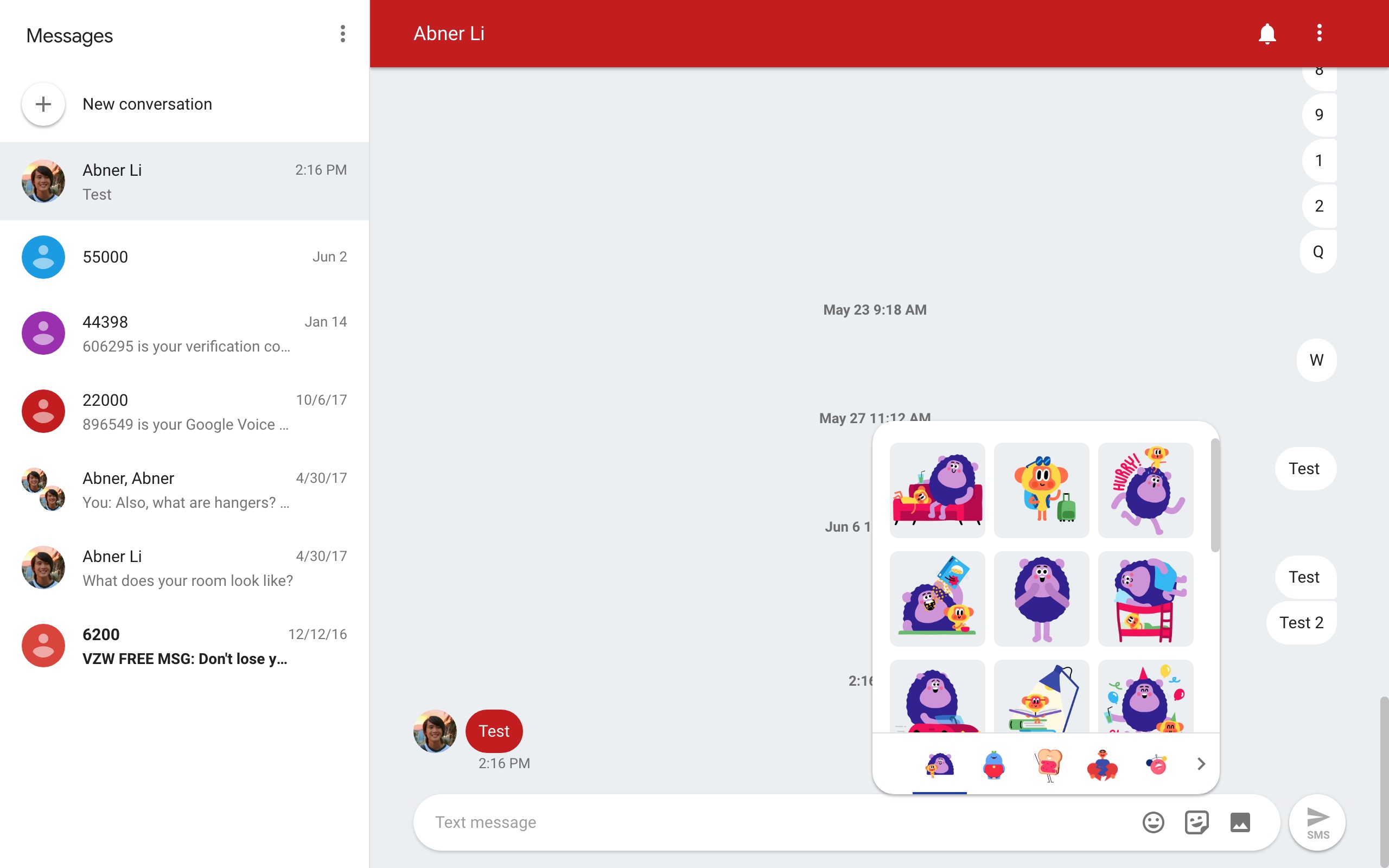 Beyond messaging, Google Duo continues to be a success as a lightweight and super focused video calling service, now available on Assistant Smart Displays and continually adding useful features.

Google’s other consumer messaging solution is Google Voice, which relaunched in 2017 and has continually received new features in a sign that the company is fully committed to it. The VOIP service dates back to 2009 and assigns users a portable number that is cloud-based and not tied to just one phone. Users can send SMS/MMS from any devices that has the app installed or via the website.

Over the past two years, Voice benefited from a redesign, new mobile and web apps, as well as features like proper VOIP on Android. Meanwhile, its longevity is ensured since it’s now part of G Suite as an enterprise service that large business customers can use.

Google plans to better integrate RCS ‘Chat’ and Messages with existing services like Google Photos — consumer messaging is now led by the head of Google Photos — and Assistant. We’ve seen signs of the latter in development, with the implementation likely similar to the Allo smart bot. Its adoption will increase as more carriers bring it online, with Verizon launching support for the Pixel 3 and Pixel 3 XL on December 6th, 2018.

Meanwhile, the RCS future will also involve Business Messaging, so that companies can have interactive conversations with customers. For example, airlines could send a boarding pass that includes flight updates and terminal maps.

Meanwhile, Google plans to sunset Allo in March 2019, while “classic” Hangouts will eventually be deprecated (we reported that timeline to be sometime in 2020) in favor of Hangouts Chat and Hangouts Meet. Announced in 2017 at a Google Cloud conference, the former was presented as a Slack competitor, with the latter focused on video conferencing.

Hangouts Chat is focused on team communication, but does include one-to-one direct messaging. As Google offers a suite of productivity applications, having a messaging service is vital, especially as Slack takes a bigger and bigger slice of the enterprise comms market.

It includes bots to allow for third-party integrations, while integrating with other Google products as well. With G Suite especially, Google likes to tout how AI and machine learning will help increase productivity. Features like Smart Reply help provide contextual replies and just launched this week.

Meanwhile, like Duo, Hangouts Meet is focused on team video calling and not much else. Telecommunication is an important market, with solutions in hot demand for conference rooms. For example, Google has released Hangouts Meet hardware that includes a camera, microphone, and Chromebox, as well as touchscreen to quickly schedule and start calls. For the enterprise, it includes features like phone dial-in, screen sharing, and more.

Before the classic version of Hangouts is shut down, Google confirmed that all users would have their data transitioned to Chat and Meet. This would give consumers another way to communicate through a Google service and replace Hangouts chat in Gmail, but in all likelihood, this support is mostly meant to appease existing classic Hangouts users.

So in the near future, all of this comes down to Google’s messaging and video efforts separated into four apps in two categories: Messages with RCS & Duo for “friends,” or consumer use cases, and Hangouts Chat and Hangouts Meet for “teams” as part of G Suite, or primarily enterprise use cases.

Confused? Let us know in the comments below.