Galaxy Note 20 rumors: Everything we know ahead of Unpacked [Video] 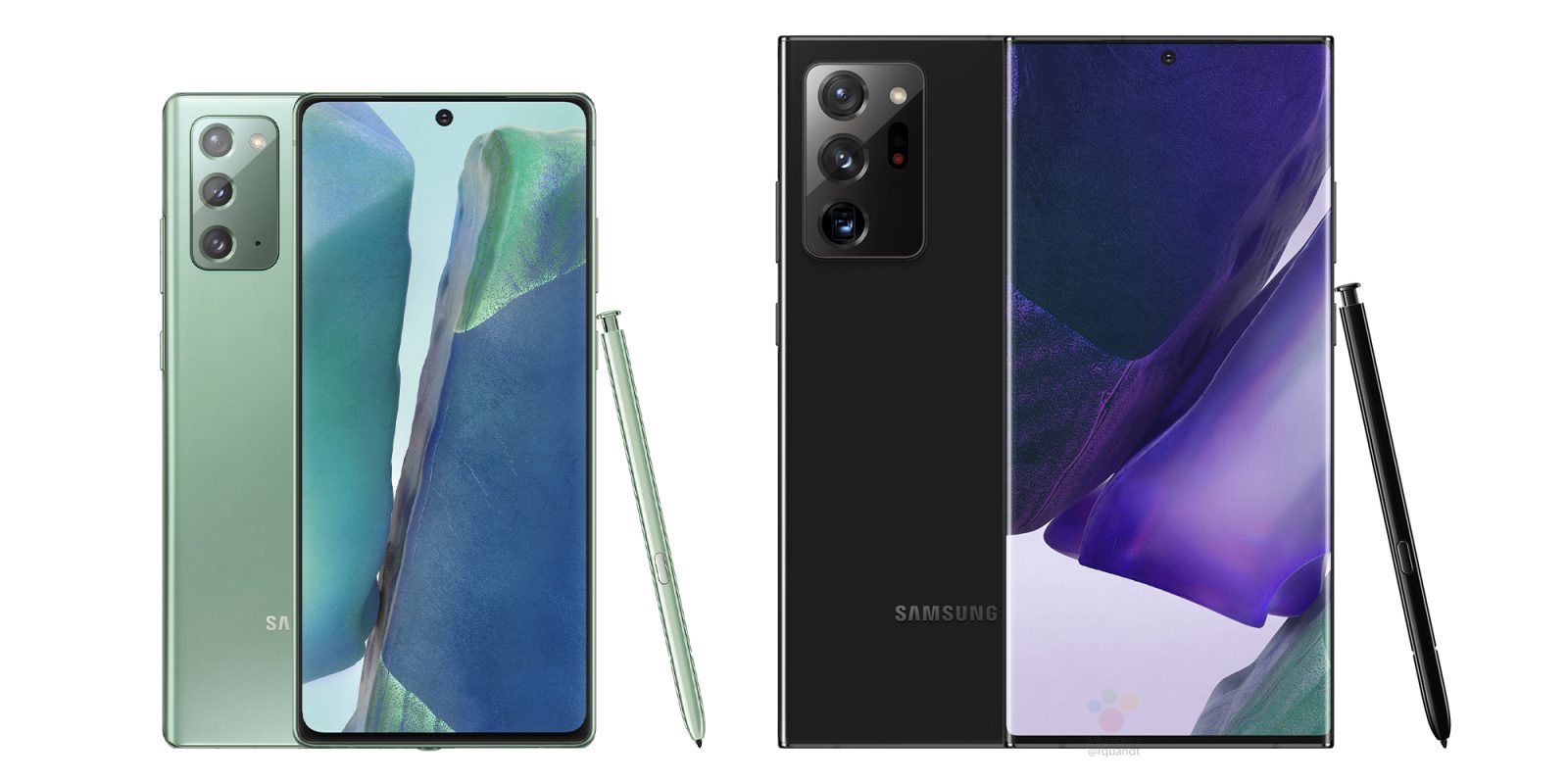 As we have seen with almost all recent flagship Samsung Galaxy hardware, plenty of tidbits, information, and images have leaked. We’ve been sifting through the masses of Galaxy Note 20 rumors to better segregate fact from fiction.

The extensive leaks of the Galaxy Note 20 series thus far, have meant that the rumors are actually far less “out there” than in recent years. We have a very good idea of what to expect and what the experience of the next Galaxy Note series smartphones will likely bring to the table.

Some of you may be looking to upgrade or might even have an eye on the rumors as to what the Galaxy Note 20 and Note 20 Ultra might offer ahead of launch. Considering that last year we saw the first proper divergence of the Note lineage but a move closer towards the Galaxy S series, you may be holding out for something a little different.

With the release expect at Unpacked on August 5, the Galaxy Note 20 series has been confirmed to launch alongside the Galaxy Watch 3, Galaxy Tab S7/S7+, Galaxy Buds Live. and the next-generation Galaxy Z Fold 2 — which is effectively the Galaxy Fold 2.

Hands-on leaks, renders, and rumors have given us a very good look at just what to expect from the Samsung Galaxy Note 20 and Note 20 Ultra. The design will skirt a fine line between the Galaxy S20 series while offering a slight refinement over the Galaxy Note 10 series from late-2019.

Large displays are a given with the Galaxy Note 20 and Note 20 Ultra coming with 6.42 and 6.87-inch AMOLED displays respectively. The smaller Note 20 is set to come with a flat display, while the Note 20 Ultra will include a curved display — which might annoy some hardcore fans. This will be the first smartphone to come with a Gorilla Glass 7 display though.

There are some nuances with these displays too, as the rumors suggest that the Note 20 is set to come with a 60Hz refresh rate — and not a 120Hz panel. The Ultra will come with Samsung’s top tier 120Hz panel, but we’re not sure if it will be capable of QHD+ at this high refresh rate.

We’re going to see a bit of a divergence or split in the standard Note 20 and the Ultra versions this time around. Display sizes and shapes aside, the Note 20 looks like it might be made from cheaper materials with plastic dominating rather than glass and metal. The backplate is expected to be “glasstic” rather than glass this time around. The Note 20 Ultra will be the ultra-premium device, with metal and glass dominating.

It wouldn’t be a Galaxy Note without an S Pen and the elegant display stylus is back again with some minor upgrades. The S Pen will also be able to be used as a “laser pointer” on the Note’s screen. Users can customize the speed, size, and even the color of the pointer too.

The familiar design remains the same with the side button and soft rubberized nib. It also locks into place neatly in the body of the Note 20 and Note 20 Ultra but the slot is being moved from the familiar right side to the left for some reason.

We practically know all of the specifications of the Galaxy Note 20 and Note 20 Ultra thanks to leakers and tidbits drip-fed over the past few weeks. Like with most Samsung Galaxy devices, there are no real surprises but in the hardware department.

Both Note 20 models were rumored to come with the Qualcomm Snapdragon 865 initially. However, since the Qualcomm Snapdragon 865+ has now been announced, we are led to believe that the Note 20 series will be the first with the slightly overclocked 5G-capable chipset in North American markets. The rest of the world will have to deal with the much less fancied Samsung Exynos 990 chipset.

Expect decent all-day longevity on the Note 20 series. The rumored battery sizes are said to be 4,300mAh for the Note 20, while we’re likely to see a 4,500mAh battery on the Note 20 Ultra. Both will support fast and wireless charging as standard too.

Yet more differences between the Galaxy Note 20 and Note 20 Ultra are rumored with the camera setups. The Note 20 will rely on a 12-megapixel main sensor, with a 64-megapixel telephoto zoom lens, 12-megapixel ultra-wide-angle lens, and Time-of-Flight sensor on top.

Now the Galaxy Note 20 Ultra will come with essentially the same setup as the Galaxy S20 Ultra. That means 108-megapixel main sensor, 13-megapixel telephoto zoom lens, 12-megapixel ultra-wide-angle, and laser focus sensor. It’s worth noting that the 100x Space Zoom is being capped at 50x on the Note 20 series this time around — which is probably for the best.

In terms of video capabilities, the Note 20 Ultra supports 8K just like the Galaxy S20 series, with options for UHD 24/30/60fps, FHD 24/30/60/120fps, and HD 30fps. Samsung has also added the ability to shoot in a 21:9 aspect ratio. To better suit pro users, too, there are some “Pro Video” features on the Note 20 Ultra. This includes a histogram and some fine-tuned audio controls that are available while shooting a clip.

Expect a similar experience to that of the Samsung Galaxy S20 series from the Note 20 and Note 20 Ultra.

We don’t have an explicit release date for the Samsung Galaxy Note 20 series, but we are expecting to get detailed information during the August 4 Unpacked 2020 event livestream. Some are suggesting that the actual release date will be August 21, but, again, we’d always take these Note 20 launch rumors with a pinch of salt.

Expect to see the Galaxy Note 20 and Note 20 Ultra online and in-stores towards the end of August 2020 is our best estimate.

Pricing is always a contentious part of any smartphone or tech announcement and the Note 20 series will be no different. Of course, we can’t confidently give you information on US pricing but rumors suggest that the Note 20 and Note 20 Ultra will start at €999 in European markets.

We’d imagine this will translate similarly to US dollar pricing given the Note 20 EU pricing rumors. Expect something closer to that $1,000 price-tag in US markets. This will obviously be cheaper if you buy from a carrier or get a deal. Samsung is actually offering $50 in online store credit if you place a pre-order ahead of launch.

What the Note 20 won’t include

The Note series has always been known for packing in everything that you may need during a busy day, but there are going to be some notable omissions from the first Note series devices of the new decade.

Sorry guys the headphone port is effectively dead on flagship Samsung devices. If you need the port, then you’ll have to go for the Galaxy S10 series.

What are you hoping to see on the Samsung Galaxy Note 20 and Note 20 Ultra?

We want to open up the floor to you: What beyond the leaks and even including the leaks would you like to see come launch day? We are now on a countdown to see the Galaxy Note 20 and Note 20 Ultra in the flesh for the first time.

Let us know in the comments section what you are hoping (or not hoping) to see from the Note 20 series. What Note 20 rumors are you excited or disappointed by? Remember to keep it civil.