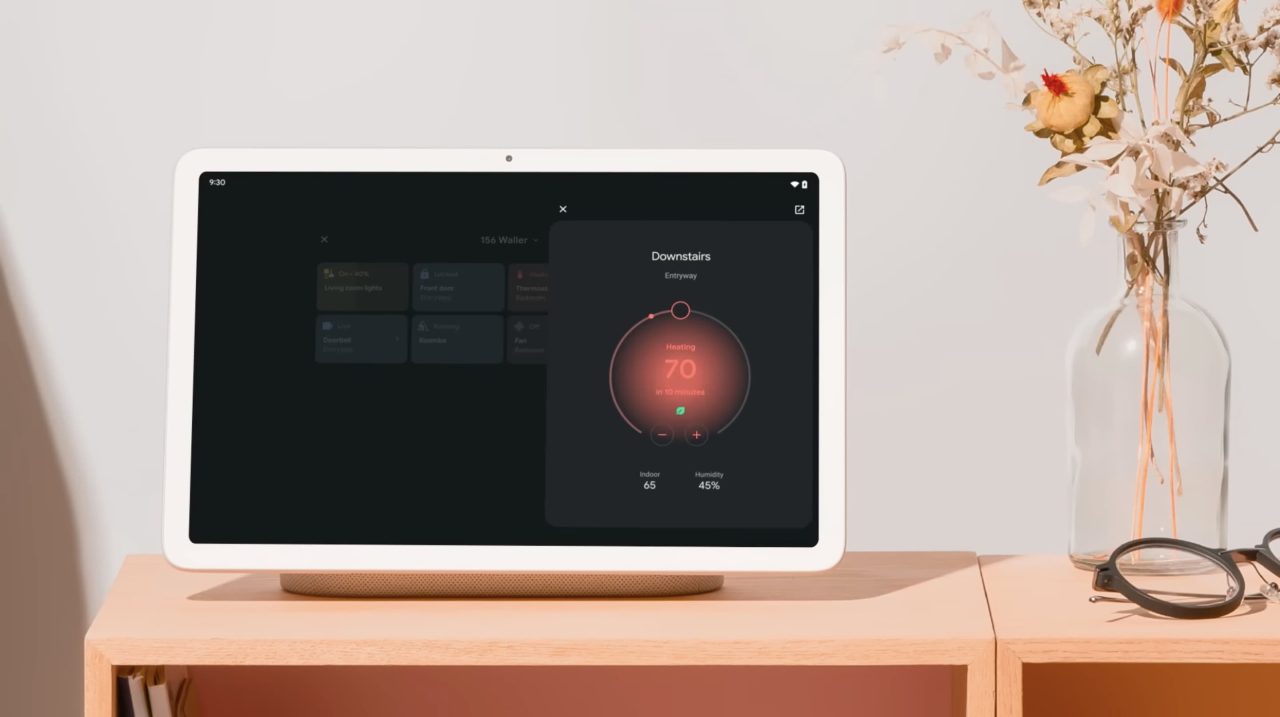 In talking with Google and learning more about the Pixel Tablet, my biggest takeaway is that pulling double duty as an Assistant Smart Display will be its path to success. It all comes down to execution, which of course is harder said than done given that Google basically tried with Assistant Ambient Mode two years ago. Meanwhile, Apple is rumored to be right behind the Pixel Tablet and following the same strategy for the iPad.

In mid-2019, we began seeing work on an Assistant “Ambient Mode” in the Google app. It was officially announced that September to provide you with a “visual overview” by replacing the lockscreen of charging Android phones and tablets.

Like the Pixel Tablet, Ambient Mode showed a Google Photos slideshow with the time centered above and a way to launch Assistant below. The main “home” view noted the time in the top-left corner with an Assistant greeting and your next appointment.

Weather appeared in the top-right with a column of calendar notifications and reminders. There was also a way to resume music with fullscreen control available. The final component of Ambient Mode was a row of smart home actions like seeing camera feeds, turning on/off lights, and managing the thermostat.

It launched on two Lenovo tablets that came with docks and Nokia phones. In many ways, this experience was more feature-rich than a Nest Hub since unlocking literally gets you a full tablet with Android apps.

That is very much the upcoming pitch of the Pixel Tablet, though Google is very committed to offering a great tablet experience for media consumption and productivity through large screen-optimized Workspace apps. In fact, our conversation with Google revealed that the product team considers that to be the primary reason for the Pixel Tablet existing, with the Smart Display aspect and Charging Speaker Dock coming after.

I personally think Google will find more success if it puts the Smart Display component of the Pixel Tablet first, or at least on equal footing when marketing the device. I believe doubling as a Nest Hub is what will get Android tablets into homes in the first place, and then people could discover all the work that Google has put into tuning the mobile operating system for large screens, and optimizing first-party apps.

In fact, I think the Smart Display-on-Android experience should be made available to all partners (i.e., Samsung) if Google wants to seriously compete with Apple.

Speaking of the iPad, Bloomberg’s Mark Gurman on Saturday reported that Apple is “looking to eventually push its tablet deeper into the home with a plan to turn the device into a smart hub and speaker.”

I reported last year that Apple is exploring a stand-alone device that combines an iPad with a speaker hub. The idea is to offer something that users can place on a kitchen counter, in the living room or on their nightstand. But Apple also has worked on an iPad docking accessory that it could sell separately and would accomplish much of the same thing.

It remains to be seen whether that docking accessory would just be for new iPads going forward, or have some backward compatibility. If it’s the latter, the Pixel Tablet would be severely upstaged if Apple could just update iPadOS and sell an accessory that breathes new life into iPads that people already have but don’t fully use.

Android OEMs have the natural affordability advantage. However, if this rumored Apple dock is even cheaper than what Google and partners are offering brand new, the best chance of success for modern Android tablets would be greatly diminished.

Of course, this path to success for a form factor that Google says it is committed to comes down to execution. In theory, Google could have done the Smart Display aspect of the Pixel Tablet two years ago and gotten Samsung on board. Of course, Assistant Ambient Mode was far from a success. Lenovo announced a new tablet running Ambient Mode in January of 2020, while the experience expanded to OnePlus a month later.

We haven’t heard anything about Ambient Mode since the start of 2020, which goes hand-in-hand with Assistant going back to the basics – improving the fundamental voice experience instead of branding various experiences as Assistant-powered – over the past year. There’s the deprecation of Assistant Snapshot and most recently the Driving Mode Dashboard/homescreen.

“Once more unto the breach”

I think what Google has going for them today is that the Android tablet experience is in a better place thanks to Android 12L and 13, as well as a push to encourage third-party app optimizations.

Meanwhile, Android tablets could just be the next evolution of Smart Displays. The Nest Hub has seen new features like Look and Talk and Quick Phrases in recent months, while we’ve seen signs of a big UI redesign. However, none of those capabilities are unique to dedicated Cast or Fuchsia-powered Smart Displays versus Android tablets.

Lastly, and while not the most ideal answer, competition from Apple and the iPad could push Google to innovate and follow through with the Pixel Tablet in a meaningful way. Debuting this experience on a Pixel-branded product and having that fail would be a bigger black eye than Ambient Mode ever was. Those two factors alone are powerful driving forces.