END_OF_DOCUMENT_TOKEN_TO_BE_REPLACED

I’ve never been a big proponent of the stock Mail application in OS X, so I generally find myself relying on Gmail inside a browser for all of my email needs. In fact, I don’t have any accounts configured inside of the Mail app at all. With this in mind, I get frustrated when I accidentally click a mailto link while I’m using Chrome. Doing so forces the Mail app to open, which wastes time.

Wouldn’t it be better if you could configure Gmail to be the default mail client inside of Chrome or another browser? In this video tutorial, I’ll show you how easy it is to configure Chrome, Safari, and even Firefox to use Gmail as default. END_OF_DOCUMENT_TOKEN_TO_BE_REPLACED 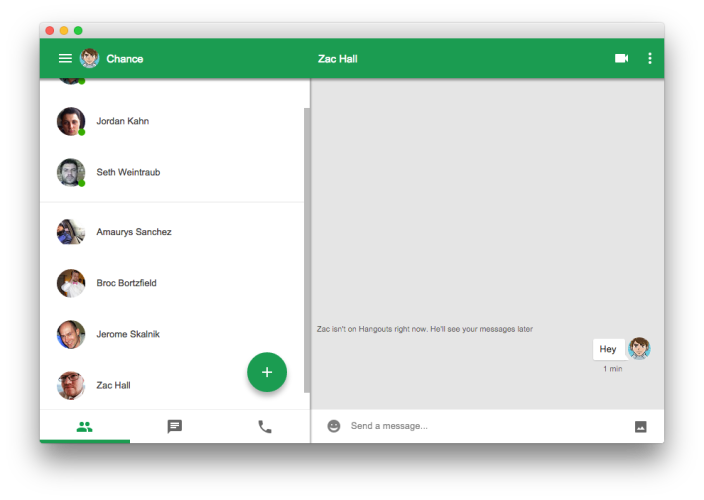 Google today updated its Hangouts Chrome app with an entirely new interface. Perhaps more notably than that, the app has support for Mac OS X users in addition to the trio of Windows, Linux, and Chrome OS. The UI has been refreshed to be more similar to the Android version of the app, a trend that has been increasingly common for Google services over the past few months.

END_OF_DOCUMENT_TOKEN_TO_BE_REPLACED

OS X 10.10.3 makes it easier to login to Google accounts with two-factor authentication

As promised in September, Google has launched the 64-bit of the Chrome browser for Mac to the public after a few months in beta. According to Google’s original announcement, the update drops support for 32-bit extensions, requiring all developers to update with 64-bit support.

People today use multiple devices in their daily activities: phones, tablets, laptops, smart watches, TVs, and more. But the way we work is still device-centric. We still use one application, within one device, with data that is tied to that application and device.

Samsung Flow is a platform that enables developers to create seamless transitions across devices, so that people can change devices in the midst of an activity and continue right from where they left off.

Flow is compatible with anything that works with Android’s Share feature: if content can be shared with other apps, Flow can be used to to hand it off to other devices …  END_OF_DOCUMENT_TOKEN_TO_BE_REPLACED END_OF_DOCUMENT_TOKEN_TO_BE_REPLACED

How to enable the Google+ Photos Chrome app on Mac & PC

Last month we reported that Google’s slick new “Google+ Photos” app that launched exclusively on the Chromebook Pixel could possibly be making its way to Mac & PC. The proof came from a newly posted listing on the Chrome Web Store that made references to auto-uploading features specifically for OS X and Windows. Unfortunately, launching the app would give users a “not supported on this platform” error message. While Google has yet to officially launch the Mac and PC versions of the Chrome app, there is a way to bypass the error message and enable the app now.

END_OF_DOCUMENT_TOKEN_TO_BE_REPLACED

Browse Google+ on the desktop with Tab for Google+ Tab for Google+ is an app available on the Mac App Store that brings Google+’s web functionality to the Mac desktop. The app is available for free and offers just about every feature plus.google.com offers — except Hangouts. Upon logging in via your Google account, you’ll be greeted with the main sections of the app: Streams, Photos, Circles, Profile and Notifications.

Of course, this application won’t replace Google+’s website, rather it’s just a nice app that sits in your applications bar to view while you work. Perhaps if the website is more your thing, check out Google+ for Mac which is essentially just a browser window. We’re hearing the developer is working to make it native though. Check out another screenshot after the break: