Opinion: Now that Allo for web is here, it’s time to give Google’s messaging app a second chance

Ever since Allo made its debut last September, one of the biggest missing features for the messaging service was a proper desktop client for continuing your conversations while at your computer or laptop. We finally got that with the release of Allo for web today, and now that the feature is here, it’s time to give Google’s messaging client the second chance it deserves…

It’s no secret that there are more than a few messaging platforms to choose from these days, and it’s often said that Google is one of the biggest offenders in that area. You can chat with people directly within the YouTube app, you can send/receive SMS and RCS messages via Android Messages, and you can even still use Hangouts if you’re someone that likes to see the world burn. Google does still have some work to do when it comes to cleaning up its numerous messaging platforms, and while things aren’t perfect quite yet, the improvements and features we’ve seen come to Allo are plentiful.

Allo launched with a relatively bare-bones mobile app, but since that time, we’ve seen it gain the ability to backup/restore conversations from older devices, create stickers based off of selfies that you take, offer Google Assistant functionality in more languages, and plenty more. Allo isn’t the feature-lacking messaging service that it once was, and Google’s dedication to adding these new goodies (no matter how big or small) is a sign that this is a service that’s here to stay.

With today’s launch of Allo for Web, that point is reinforced even more. 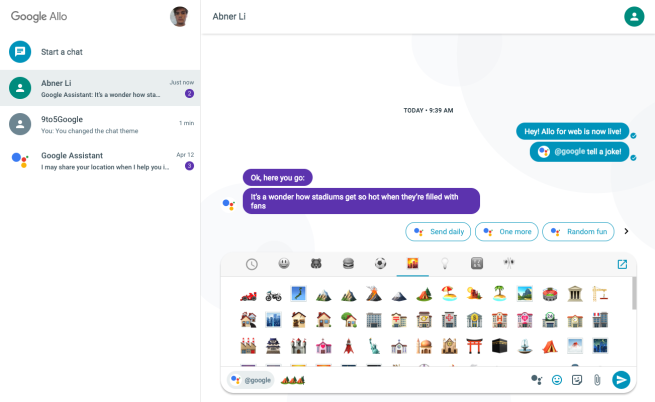 I love using Allo on my phone, and most of my friends do as well. But using Allo was previously just not a practical choice seeing as how I work from a computer for most of the day. With the introduction of Allo for web, this is no longer an issue. I can now continue to talk to friends and family on Allo without having to pick up my phone. Based on the complaints that popped up following the app’s initial release, this should satisfy the heaps of individuals that simply couldn’t use the service for this particular reason.

Furthermore, the release of Allo for Web puts it on a much more level playing field to properly stack up against the rest of the competition. It offers substantially more features than Hangouts, a similar user experience in many regards compared to WhatsApp and Facebook Messenger, and packs exclusive goodies like the Google Assistant, numerous stickers, integration with Duo for video calls, and more.

When you look at everything that Allo now brings to the table, it only makes sense to at least give it another chance as your messaging platform of choice — especially now that you can access your conversations at home and on the go. It may not be as full-featured as some of its competitors, and it still doesn’t have SMS support (and probably never will), but most of the critical pieces are in place now.

Allo has grown up a great deal over the past 11 months, and Google’s dedication to the app during this time should be comforting to those looking to switch. I’ve been waiting for the perfect moment to dive head first into Allo again, and with the release of the official web client, now’s the perfect time to do so.