Google Home Max Review: After a holiday test drive, the fam loves its big sound as much as I do 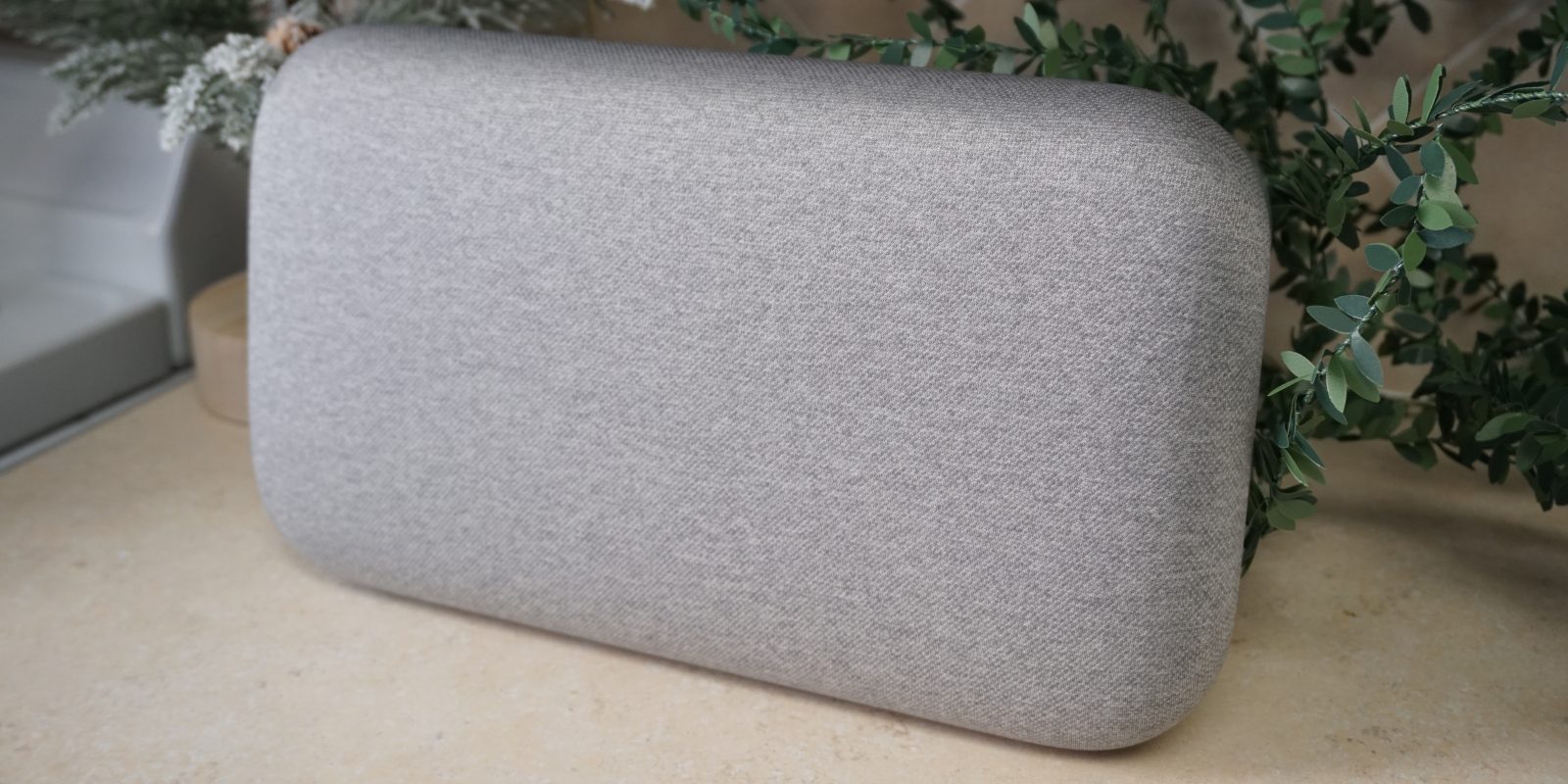 When I first heard that Google was working on a larger, Sonos-like Google Home, I couldn’t have been more excited. I’d never owned a nice home speaker until the Google Home Max, because I never really had the need — much less the desire — for a “fancy home speaker”. That changed when I saw the initial ad reel for the Home Max at Google’s event last year in San Francisco, and now I’ve had the joy of using the Max as my primary Home for a few weeks. It’s good.

I don’t think the product really needs much explaining, and I had a bit of déjà vu attempting to describe it to my family over the holidays. I remember when the iPad first launched and the question from my not-so-tech-savvy family was “so it’s a big iPod touch?”. The answer for the equivalent Google Home Max question is about the same: yes, it’s a big Google Home. Basically.

But there’s a nuance to that iPad question that maybe didn’t go explained back then — and in some cases isn’t even understood by some today. While, yes, the hardware is essentially a blown-up version of an existing product, the “bigness” is not the only thing that changed here. The iPad’s size enabled an experience that was the same but different, and the Home Max does, too.

With the Google Home Max, the Assistant kind of plays the background. Yes, it’s all functionally identical if you want it to be, but what I realized with the Max is that the listening experience came to the forefront. For the entire two weeks that my family and I used the Home Max, we didn’t do any of the things we’ve come to use our kitchen Home for — timers, recipes, dumb quizzes, etc.

Instead, the Home Max dutifully served its intended purpose as a centerpiece to a room listening experience. It came in handy almost every day over the holidays. Whether it was having the family over and playing the A Charlie Brown Christmas soundtrack in the background, jamming out to some loud pop music on New Years Eve, or relaxing in the evening to some Michael Bublé (we didn’t actually do that), the fam unanimously found the Home Max to be a great-sounding speaker.

I’m sure someone out there will pick apart the Home Max and compare it to its similarly-priced home speakers in terms of audio quality, but as someone who has never owned another nice home speaker (and doesn’t have another one to compare it to), I’m perfectly fine living none-the-wiser in the case that it doesn’t live up in some minor way to the competition. Like I said, based on my untrained ear and the untrained ears of my family, we’re all more than happy with the speaker.

It gets really loud, and doesn’t lose any of its quality while doing so. I’d say it’s the only speaker I’ve ever owned that I could say that about. None of the rooms in my home were actually big enough and we didn’t throw any parties wild enough that I even had the chance to listen to the Home Max at full volume for any longer than 10 seconds. For those short bits of time, though, it sounded great. 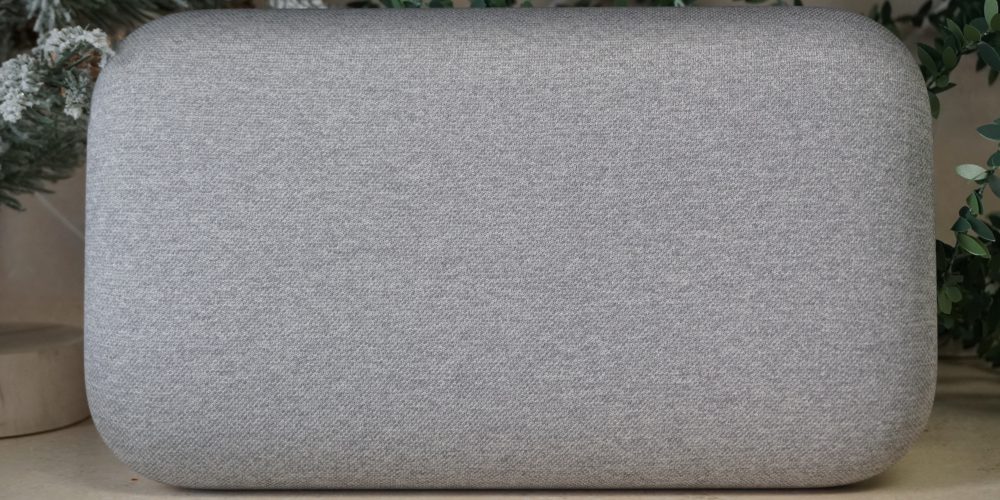 The bass is really punchy — and that’s something that mattered to my younger siblings-in-law who basically went full-Skrillex on this thing to test out its dubstep abilities. Just by the look on their faces when this thing was pushing out Major Lazer’s Know No Better at full volume (which just so happens to be the track Google used in the initial teaser reel for the speaker), I can tell you they were impressed. I realized in those moments just how fun this speaker would be if I did have some reason to play those kinds of tracks at full volume. I don’t. But it’s good to know it can do it.

On the other side of the coin, it was an absolute joy playing Christmas music on this thing over the holiday. We kept it in the kitchen while we were cooking, and it played some chill holiday tracks at a low-to-moderate volume, while still providing a breadth and depth to the sound that filled the whole room. That’s the difference that this thing’s 4.5-inch woofers and custom tweeters make.

Beyond its bigger speakers, though, the Home Max has a few extra features that make it just a bit more capable than the standard Google Home and Google Home Mini.

The first is Smart Sound, which is basically continuous, automatic tuning of the speaker to fit the room it’s in — and even the position of the speaker within the room. I didn’t really notice this feature at all, but that’s pretty much the point; if it’s doing its job well, the speaker will always sound great regardless of where or how you place it in the room. You shouldn’t notice that the speaker being on a shelf off in the corner of the room is any different than on a table in the middle. 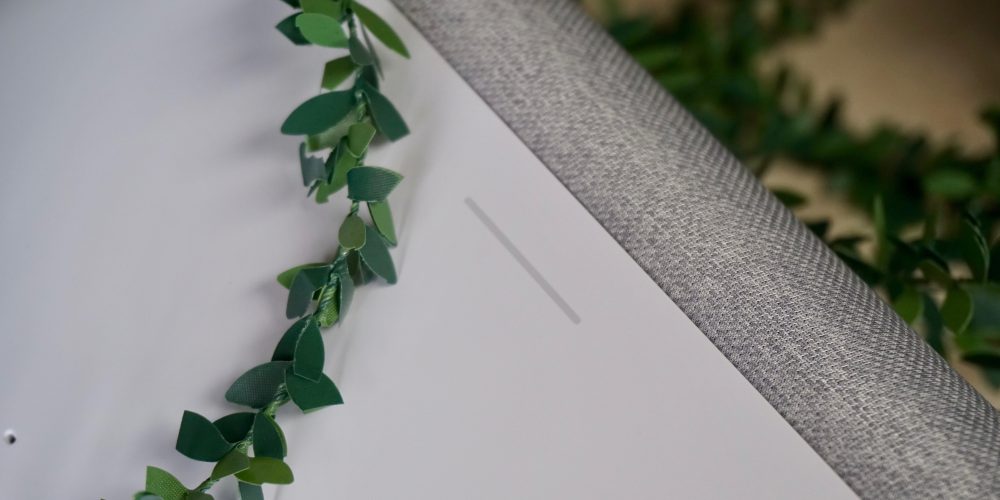 Another feature, one that I didn’t get the chance to test, is the ability to pair the Home Max with another Home Max for even more sound. Unfortunately, I was only provided one Home Max review unit, so I didn’t get to see this in action — and it doesn’t do pairing with other Homes other than the Max. Regardless, if you’re a DJ considering the Home Max for your performance setup, this is definitely a great thing to have. It’s entirely wireless, and from what I saw at the event, works great.

On that note, another unique feature that would come in handy for those kinds of setups is that the Home Max can actually be used in two orientations, and comes with a nice little rubber base to accommodate that. You can use it in standard landscape, or you can move it vertical and place it on the base that way — either way, the lights on the front will adjust to you. And the touch controls on the side will go from swiping left-to-right to control volume, to bottom-to-top.

(As a hilarious side note, the Home Max will let you know verbally if you’ve placed it on the base upside down — I actually had this happen to me the first time I set it up.)

Finally, the Home Max, unlike the standard Google Home and the Home Mini, has a 3.5mm audio input. While that port apparently has some latency issues — which could be a concern for professionals hoping to use the Home Max for DJing — Google has acknowledged the issue, though notably does not yet share that a fix is in the works. Personally, I’ve yet to use the 3.5mm jack. I’m in the tiny minority that thinks we should be moving past that archaic standard. 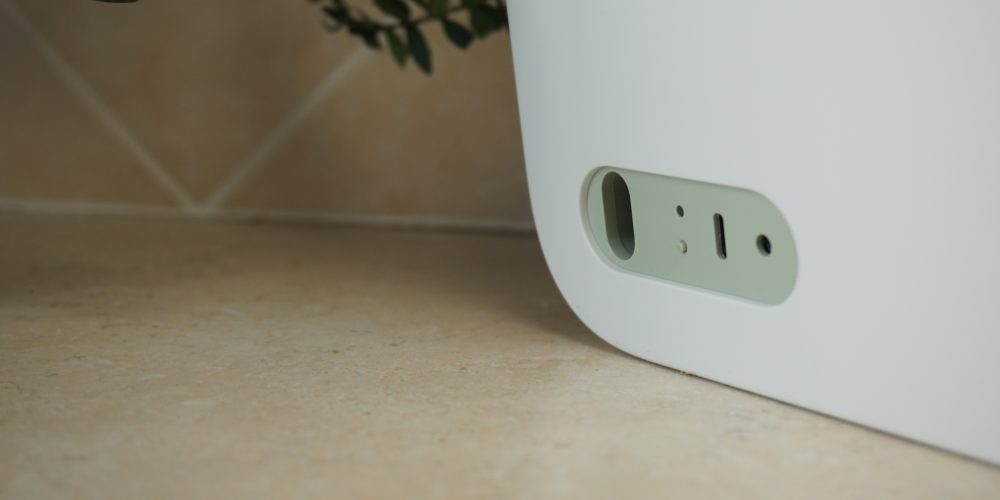 You can read more about the little things with the Google Home Max in Seth’s first impressions post. I share some of the same thoughts. It’s a little heavier than I expected, it looks really nice, and I also found the WiFi range to be a little less than hoped. And, yes, on the back of the speaker there’s a mute switch (a real switch like the Home Mini), and a USB-C port for… charging a phone? (Seth also noted weirdness with the touch area, but that’s because he forgot to peel off the tape.)

Other than these little bonuses, what you see is what you should expect to get with the Google Home Max. It’s a Google Home, so it has all the Assistant-powered functionality you would want. Control your smart home accessories. Ask for fact-based answers. Get the weather. Set timers. Play content on your television. Control your thermostat. Obviously, control the music.

But unlike the standard Home, and especially the Mini, this thing is an absolutely fantastic speaker. Even at its full price of $400, it’s not absurdly-priced at all when you consider that similar offerings from Sonos and others go for $300 to $500. But what you have to remember is that it comes with a year of YouTube Red, valued at about $120, so really the Home Max costs around $280.

At that price, I’m not sure if there’s a better value for your money in this category.