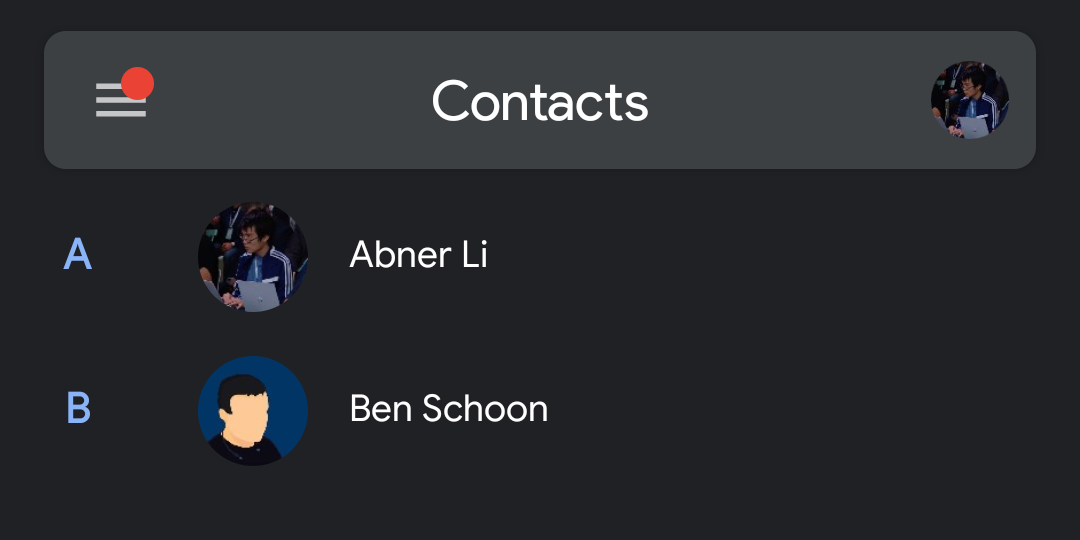 Since I/O 2018, the Google Material Theme has rolled out to many first-party apps, with major ones like Gmail for Android just coming aboard. Many of the newer redesigns feature a faster account switcher, with Google Contacts now the latest to adopt this UI element.

Version 3.4.6 of Google Contacts for Android revamps the app bar by using a full-width search field. The hamburger button for the navigation drawer and overflow menu are still there, but integrated into the “Search contacts” bar.

However, the menu for Select, Select all, and Customize view is no longer at the very right to make way for the new profile avatar. This doubles as an account switcher and shortcut to see “Contacts from all accounts.”

Like in Gmail and Google Keep, users no longer have to visit the top of the nav drawer to switch to a different account. This is a one-tap solution, and continuously reminds users what account they’re viewing. It also provides a shortcut to managing and adding other accounts.

When users first launch the app, “Contacts” will appear in the search field before animating out and revealing the overflow button. Meanwhile, the nav drawer is slightly shorter thanks to “All contacts” being moved, while the app icon now takes the places of the switcher up top.

This latest iteration on Google’s Material Theme is clearly moving towards the new account switcher, and de-emphasis of the nav drawer. Google Keep, Gmail, and the Google app were first to implement, with Material Themes initially just adopting a more compact version of the switcher.

Google Contacts 3.4.6 began rolling out earlier this week and is now widely available via the Play Store.