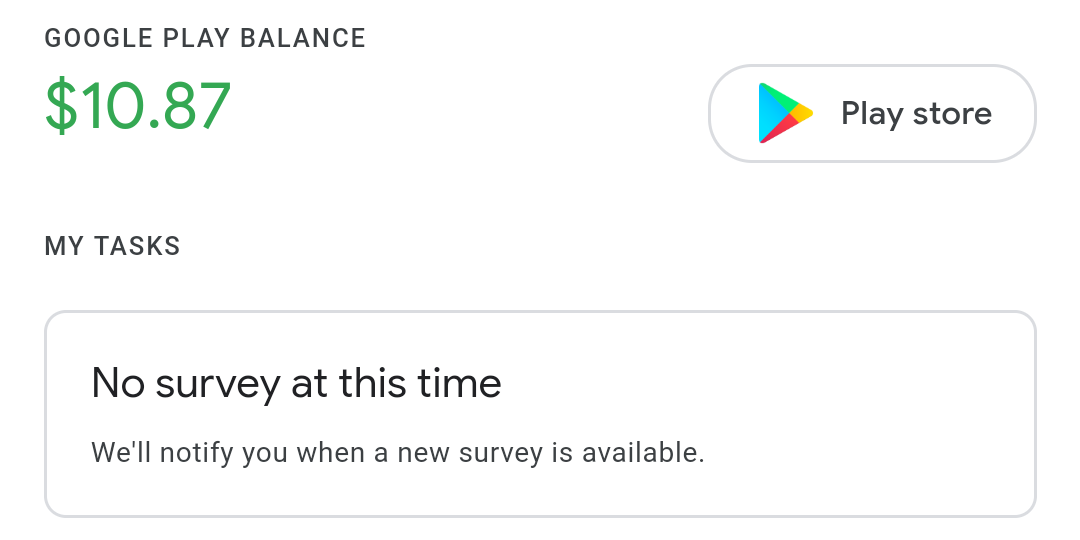 Last August, we enabled a Material Theme redesign for Google Opinion Rewards on Android. The survey app that compensates users with Play credits or through PayPal is finally rolling out that new look.

Version 2019040804 (via Android Police) today revamps the Android client, starting with a new white app bar. The standard Google logo appears centered alongside “Opinion Rewards.” A navigation drawer is still present with links to Settings, Help, and Terms of service. Like other apps, the account section no longer features a background header image.

The “Home” feed is now stark white with no dark blue shades present. Your Google Play balance is in the top-left corner, with a “Play store” icon and shortcut to the right of it.

Surveys are labeled under “My Tasks” and housed in a Material Theme card that features faint gray outlines. There is also a prominent card to “Share with your friends.” Reward history gets the same treatment and is functionally unchanged with this refresh. The same can be said about the settings menu.

This new look for Google Opinion Rewards comes as the service now incorporates the Cross Media Panel research program, in addition to surveys. That Play Store-earning aspect should be widely available around the world at this point.

The Google Opinion Rewards Material Theme update is rolling out now via the Play Store.