Google today announced its Google Shopping 100, which collates the most trending gifts that have been searched for in the United States — with the Google Home taking the #1 spot in the tech trending list.

The categories include holiday gifts, like tech, kitchen gear, accessories and apparel, gaming, sports and fitness, home goods, personal care, and toys and games. Despite being available for a couple of years now, the Google Home is currently rated as the #1 tech gift for 2019 by search volume.

Disappointingly, there is no differentiation between the Mini and the standard Home in Google’s rankings though. The only other piece of Made by Google tech to make the list was the Nest Hub Max, which came in at #12 on the list.

Being top of the tree for tech product searches is clearly a great advert for the awareness of Google smart speaker hardware, we do wonder just how much pricing plays a part in the public willingness to pick up the entry-level Google Home Mini ahead of other competitors. Now seeing larger discounts with the recent release of the Nest Mini, you can pick up the Home Mini for under $20 quite consistently.

That’s not forgetting just what a fantastic piece of kit the Google Home Mini is. It’s the easiest route into a smart home for many people out there thanks to its wealth of integrations and ease-of-use. It’s no wonder it is at the top of many tech gift shopping lists.

What is kind of surprising is how the tech list is more or less dominated by home entertainment tech, with the Nvidia Shield TV coming in at #3. Although, it’s actually Amazon that manages the most prominence though, with no less than three of its most popular products included — the Amazon Echo Dot Kids Edition, Amazon Fire TV Cube, and Kindle Fire HD 7 Kids Edition. 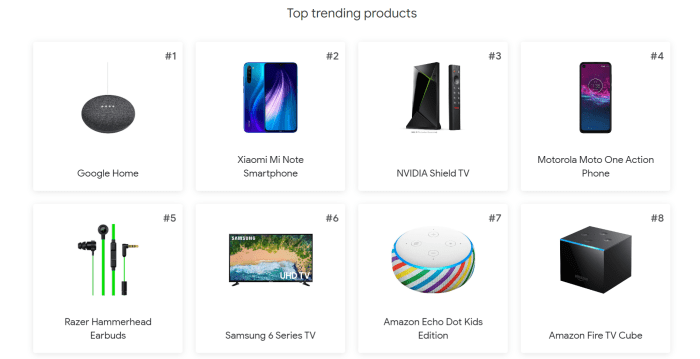 It’s unusual not to see a smartphone from Apple, Google or Samsung anywhere near the list, instead, the Xiaomi Mi Note is being searched for more than any other device, with the Moto One Action also making the top five. The rest of the list is more spread evenly across the kind of tech you would expect. Check out the full list below.

Of course, the Google Shopping 100 lists span far more than just tech. Although Google notes that the most popular gift according to searches still remains Monopoly — arguably the most traditional holiday board game. If you’d like to see all of the full lists for yourself, you can find them by clicking here.