One of the biggest promises of Google Stadia is the ability to play AAA titles on low-end devices like a Chromebook, which can be done through Stadia’s web app. This week, the Stadia team has rolled out a slew of updates for their web app, fixing a variety of player complaints.

Of course, the biggest improvements Google has made to its Stadia for web experience in recent memory are the addition of 4K support and the ability to play wirelessly with the Stadia Controller. Since then, though, Google has been putting slow and steady effort into making Stadia for web a great way to play.

For example, regardless of whether you have a dedicated gaming headset or simply have a microphone built-in to your laptop, Google Stadia for web shows a large notification for “Headset connected” when you first log in. What made this notification particularly frustrating, though, is that it fully blocks the top-left of the screen, obscuring the “Home” and “Store” menu buttons.

Earlier this week, Stadia for web updated its UI to put those upper options into their own dedicated bar, which helps make the buttons distinctly visible, rather than simply floating above the game’s background. As of yesterday, as spotted by members of the Google Stadia subreddit, the “Headset connected” notification now appears below the new menu bar, allowing immediate access to the “Store” and “Home” buttons. 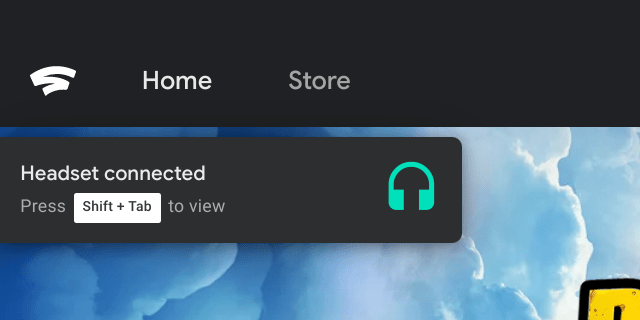 Google also rolled out another improvement in the last few days, one that should be particularly helpful for those who prefer to play Stadia with the controller. Previously, when navigating the Stadia web interface with a controller, you could easily launch your most recent game or flip through your game library, but due to a minor bug, you couldn’t use the controller to select the play button for games in your library. This is no longer the case, making it all too easy to start any game in your Stadia library with just your controller.

While there are still a ton of features missing from Stadia’s web experience, like the ability to change your quality settings without needing to switch to the mobile app, it’s nice to see that Google is committed to keeping up with these small quality of life changes that make a big difference over time.