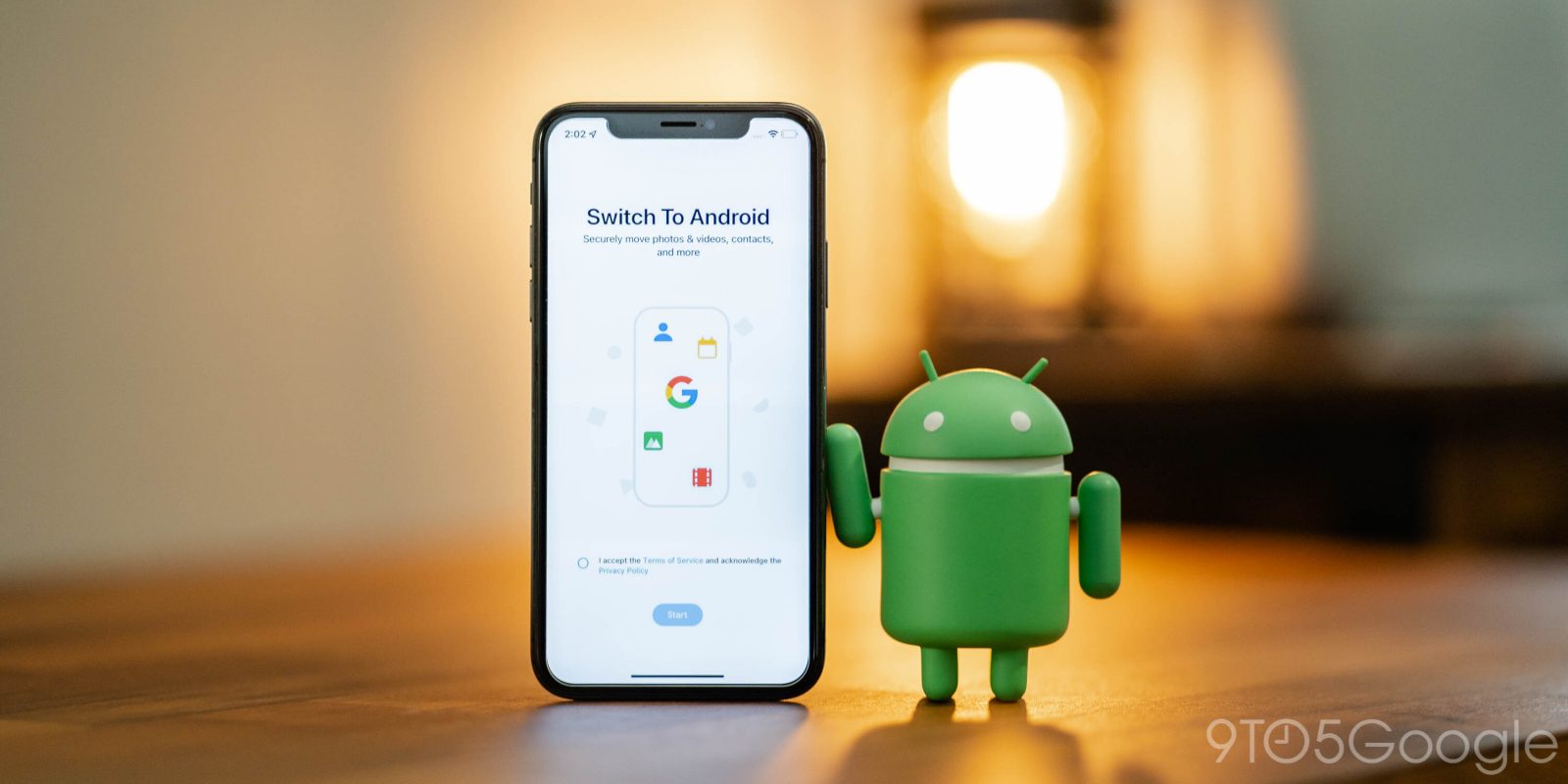 Google is preparing to launch a brand new way to move from Apple’s iPhones to an Android device. Here’s your first look at Google’s “Switch to Android” app running on an iPhone.

When moving from one Android device to a new one, it’s easy to simply connect the two phones together – either wirelessly or with a USB cable – to seamlessly copy over all of your apps, contacts, messages, photos, and more. By contrast, copying your data from an iPhone to Android has not been nearly as simple of a process, involving backing up your data to Google Drive and restoring it manually. Android 12 made things a bit easier, allowing you to copy over contacts, apps, and media, but only via a Lightning cable connection.

In the opposite direction, for over five years, Apple has offered a dedicated “Move to iOS” app for Android that attempts to make it as easy as possible to join Apple’s ecosystem. Back in July 2021, we reported that Google was working on its own app to help new customers make their next phone an Android.

Switch to Android has now been soft-launched into the App Store as an unlisted application – a feature that Apple only recently launched – only accessible through a direct link which our APK Insight team was able to uncover.

With that link, we were able to successfully install Switch to Android on an iPhone, and run it. However, while everything seems to be ready on the iOS side of things, Android’s setup and restore process is not yet prepared for the Switch to Android app’s availability.

On the first screen, the app explains what exactly it will be able to copy from your iPhone to your new Android phone, including “photos, videos, contacts, and more.”

The next step asks you to scan a QR code which should be shown on your Android phone during the setup & restore process. Unfortunately, we were unable to access this setup flow, but the basic gist is that your new Android phone would generate a hotspot to which your iPhone would connect. Once connected, the majority of your important data would be transferred wirelessly.

We can see a preview of how this step will work thanks to screenshots included in the App Store listing. In them, we see toggles for “Contacts,” “Calendar events,” “Photos,” and “Videos.” Below these toggles, there is a disclaimer that only the photos and videos saved locally on your iPhone will be copied over to your new Android, and that media in your iCloud will be handled later.

Once the copying is complete, you’re reminded to disable iMessage, to ensure that messages from your friends who still have iPhones are actually delivered via SMS, rather than disappearing into the iMessage void. The final step of the Switch to Android process is to request a transfer of your iCloud data into Google Drive / Google Photos. The “Start request” button simply launches Safari to an iCloud support page where you can “Request to transfer a copy of your data.”

Update 4/19: In a statement given to TechCrunch, Google has said that they have begun making Switch to Android available to iPhone owners, gradually making the app publicly available on the App Store. In the meantime, the app is available to anyone interested through a direct link.

On Monday evening around 6 PM PT, the Switch to Android app began to roll out to the public, Google tells us. The company says it expects this process to reach 10% of users by the end of the day on Tuesday, April 19, and 100% of users over the next couple of weeks.

Of course, Switch to Android doesn’t work on its own, requiring some changes to the Android setup process, which are presumably also rolling out now.

Update 4/28: Starting in a new tweet, Google is now actively promoting its Switch to Android app to potential Pixel customers, as well as through a new landing page on the Android website. By all indications, it should now be fully possible to copy over a wealth of data from your old iPhone to a new Android phone, either wirelessly or with a cable. Specifically, you can copy over the following:

Update 6/29: After originally only marketing Switch to Android to prospective Pixel buyers, Google is now allowing the app to migrate data from iPhone to any device on Android 12 or newer. This even includes devices on the affordable end of the spectrum, built with Android 12 Go edition.

All in all, Switch to Android is a delightfully straightforward experience, making it as easy as possible to leave behind the walled garden of the iPhone ecosystem. It’s not clear at this time when Google intends for Switch to Android to launch widely, but considering how long Apple’s own “Move to iOS” app has been in the Play Store, Google’s alternative is already arriving years later than it should have.