In the early days of Android and iOS, there was already another established player on the market — Blackberry. The keyboard flaunting devices have since adopted Android as their primary OS, but before that was the case, they had an ace up their sleeves in the form of BBM.

BlackBerry, today at CES 2015, has announced that its BBM service is coming to Android Wear in early 2015. BlackBerry hopes that its Android Wear client will bring nearly the full capabilities of the messaging service to smartwatches. With BBM, users will be able to receive push notifications for new messages, read full messages, respond to messages with Google Now, and accept BBM invites. 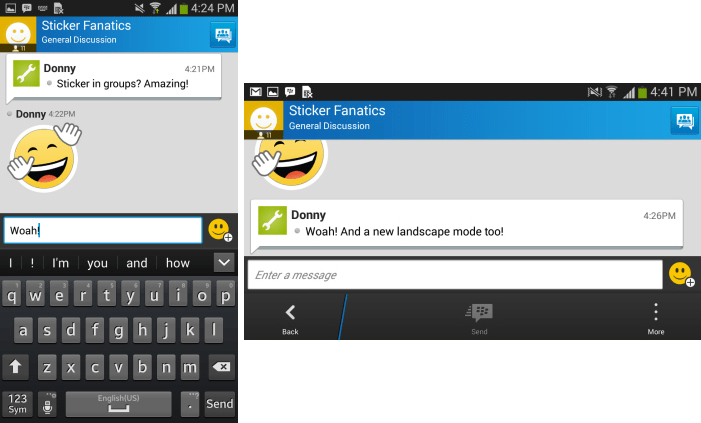 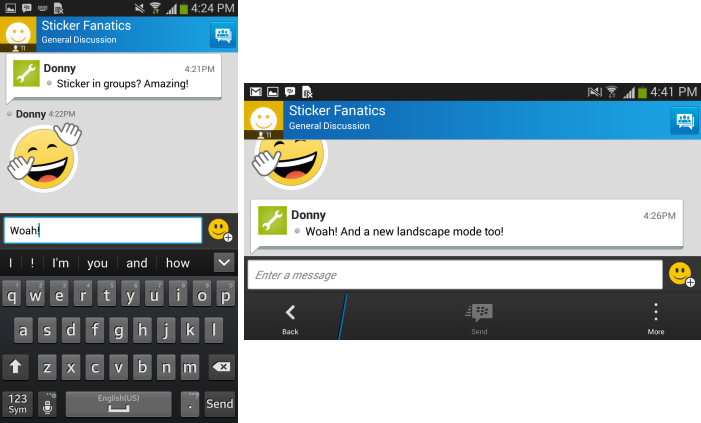 BlackBerry might have pioneered the smartphone industry, but the iPhone and Android-based devices have since captured the market and left the Canadian company in the dust. Looking to remain relevant with modern smartphone users, the company ultimately caved in and released its popular messaging app BBM for Android and iOS. Today, users checking the Play Store will find a major new update for the app in their queue. END_OF_DOCUMENT_TOKEN_TO_BE_REPLACED

BlackBerry may be finding it tough to compete in a world now dominated by Android and iOS, but it isn’t finished yet. The company has just announced a net loss of $207M in Q2, significantly lower than had been expected and far lower than the $965M it lost in the same quarter last year.

The company is pinning its hopes on its new square-screened BlackBerry Passport phablet, and says that it anticipates breaking even by the end of the 2015 fiscal year. CNBC noted that BlackBerry CEO John Chen said back in April that it could return to profit on sales as low as 10M handsets a year …

BlackBerry has announced an upcoming release of its BBM client for Android devices that includes an easier signup flow and an improved process for adding new contacts.

The new simplified registration process will request only a name, password, and email address, as opposed to the current app which requires much more information. The update will also improve the process for adding new contacts. Currently users who get an invite need send their own PIN back to the other party so they can be mutual contacts. In the new version that step will be automated. Tapping the invitation link in the email will complete the entire process.

The update also adds new emoticons to the app’s existing selection. BlackBerry Messenger 2.2 will be available on the Google Play Store later tonight.

BBM beta for Android updated with voice chat and Channels

After teasing the app for what seemed like years, BlackBerry finally released its BBM client to Android last October, to a somewhat surprising number of downloads. Today, the company has released a private beta of the app that includes the promised Channels feature, as well as voice chat support (via Engadget).

Channels is BlackBerry’s stab at a social network. The company describes it as something similar to Tumblr. Voice chat is exactly what it sounds like. It’s essentially Skype, but baked right in to the BBM app. Users can call each other, for free, over WiFi networks. This is something that Android users have been wanting for a while now in Google’s Hangouts app, so it’s surprising to see BlackBerry beat Google to the punch.

The update is available via the BlackBerry Beta Zone now. There’s no word on public availability, or when/if the update will come to iOS.

END_OF_DOCUMENT_TOKEN_TO_BE_REPLACED Holy wowzers Batman as BlackBerry announces over 40 million “newly registered iOS/Android users in the last 60 days.” The BBM tidbit dropped during this morning’s BlackBerry Earnings Report and while we’ll ignore the economic crisis that is BlackBerry, the messaging numbers are pretty interesting.

END_OF_DOCUMENT_TOKEN_TO_BE_REPLACED BlackBerry isn’t letting BBM go down without a fight as it strikes a deal to preinstall the application on select LG smartphones. BlackBerry’s once wildly popular Messenger application will come pre-installed on the LG G Pro Lite in “markets around the world.” The deal will allow a bundling agreement with LG involving “both the standard and virtual preloading” as well maintaining that BBM is available as a free download in Google’s Play Store.

END_OF_DOCUMENT_TOKEN_TO_BE_REPLACED

BlackBerry revealed via the official BBM Twitter account that in the first eight hours since launching BBM for Android and iPhone, the app has been downloaded over by over 5 million customers across both platforms.

That number could actually be much higher, as the 5 million applies only to the number of users whose accounts have been activated for use. BlackBerry did not specify how many more users were still waiting to be activated, if any. END_OF_DOCUMENT_TOKEN_TO_BE_REPLACED

After first announcing that its popular BBM messaging service would be arriving on iOS and Android sometime during the summer, BlackBerry finally confirmed in a blog post today that the app would be released on Sept. 21 for Android followed by a release on iOS on Sept. 22.

BBM will be available as a free download for Android smartphones running Ice Cream Sandwich and Jelly Bean (Android 4.x) beginning at 7AM EDT on September 21. BBM for iPhones running iOS 6 and iOS 7 will become available for each market on the App Store schedule of 12:01 AM local time on September 22. For more information, or to download BBM for Android or iPhone, visit www.BBM.com.

BBM for iPhone and Android will initially include chat, photo and voice note sharing, multi-person chats with up to 30 people, and the ability to post status updates and personal messages. However, BlackBerry says the apps will get BBM Channels in a future updates:

BBM will continue to evolve quickly. Later this year, BBM Channels will provide a forum for active, real conversations between you and the people, brands, celebrities, artists, service providers, communities and more, that matter to you. By creating a Channel, individuals and brands can engage their friends and communities in conversations sparked by their thoughts, ideas and passions. Subscribing to a Channel will let you join conversations with people who share your interests. In addition, BBM Video calling and BBM Voice calling are planned for availability for Android and iPhone in a future version.

BlackBerry rolling out BBM for iOS and Android beta invites

A report from BlackBerryOS.com notes that invites to BlackBerry’s upcoming BBM service for iOS and Android have now started rolling out to users on the company’s Beta Zone website. Back in May, BlackBerry announced that its popular messaging platform would finally become cross-platform and arrive on both iOS and Android devices “later this summer,” and that deadline to launch is of course quickly approaching. Not all Beta Zone members have received the invite email above, but it looks like BlackBerry is getting closer to finally launching the new apps.

We haven’t seen much of the iOS app, but BlackBerryOS also got its hands on the screenshots below of the latest Android beta:

Although BlackBerry has been rumored to bring its BBM messaging platform to iOS and other devices before, today the company has made things official announcing at its event that support for both iOS and Android will be arriving in the coming months. The service, which BlackBerry says currently has about  60 million monthly active users, will come to devices running iOS 6 and Android 4.0 or above when it’s launched as a free app sometime this summer in the App Store and Google Play.

The company said that it would be bringing messaging and groups functionality to new platforms first but also has plans to introduce voice features, screen sharing, and its just announced “social engagement platform” dubbed ‘Channels’ in future releases. BlackBerry CEO Thorsten Heins said the company is “committed to making the BBM experience on other platforms as fully featured” as possible: END_OF_DOCUMENT_TOKEN_TO_BE_REPLACED If you are an Android user, but are missing some of the features of the BlackBerry handsets, weep no longer. According to TechnoBuffalo, RIM’s popular BlackBerry Messenger service is set to launch for Android and iOS sometime later this year. Buffalo’s sources were able to provide a shot of the app running in an Android code debugger. Looks cool, huh? Check out another shot of BBM running after the jump. END_OF_DOCUMENT_TOKEN_TO_BE_REPLACED