If you travel internationally, you’re well aware that Google Translate’s visual translation features — which originated as the Word Lens app — are invaluable. Today, Google announced that the app has added support for 20 new languages, bringing the total up to 27.

Today, we’re updating the Google Translate app again—expanding instant visual translation to 20 more languages (for a total of 27!), and making real-time voice translations a lot faster and smoother—so even more people can experience the world in their language.

As of today, you can now translate to and from Bulgarian, Catalan, Croatian, Czech, Danish, Dutch, Filipino, Finnish, Hungarian, Indonesian, Lithuanian, Norwegian, Polish, Romanian, Slovak, Swedish, Turkish and Ukrainian. You can also do one-way translations from English to Hindi and Thai.

To make this possible, engineering teams across Google pursued an approach to OCR focused on broad language coverage, with a goal of designing an architecture that could potentially work with all existing languages and writing systems. We do this in part by using Hidden Markov Models (HMMs) to make sense of the input as a whole sequence, rather than first trying to break it apart into pieces. This is similar to how modern speech recognition systems recognize audio input…

Once you scan a document and upload it to Drive, you just need to right-click on it and select ‘Open with’ -> ‘Google Docs’.

Google adds that you don’t even need to set your language preference, Drive will automatically detect it when uploading a document.

You can access the OCR features both on the web and through the Google Drive app for Android. 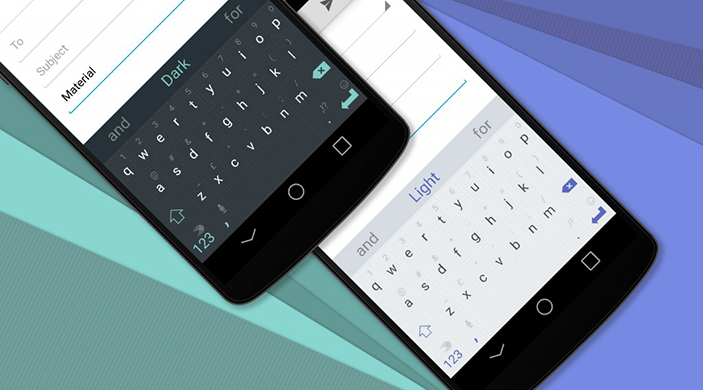 Just weeks after receiving a Material Design makeover for Android Lollipop, the popular custom keyboard SwiftKey for Android has been updated with performance improvements and support for twelve new languages. The latest version of SwiftKey for Android is available now through the Play Store as a free update. END_OF_DOCUMENT_TOKEN_TO_BE_REPLACED

Google today announced a new feature for its Google Search app for Android, catering to the billions of people in the world who speak more than one language. Previously, you had to manually switch between the language you wanted Google to recognize, but now you’re just a flick of a switch away from being able to speak in multiple languages at once—and Google will be able seamlessly switch with you.

App indexing in search results on Android gets more languages Google originally launched App Indexing for Android users back in December before rolling it out globally in English for a number of apps back in April. As pictured above, the feature allows content from Android apps to show up in search results with a button for users to quickly launch the app. Today the company announced it’s expanding the feature once again and launching it for apps in several languages other than English. It’s also added some other English results in the U.S. including the Walmart, Tapatalk, and Fancy apps.  END_OF_DOCUMENT_TOKEN_TO_BE_REPLACED

Google announced today on Google+ that its updating its Google Translate app for Android with additional language support for two features including camera input translation and handwriting.

New languages for camera input translation, which allows users to take translate text capture with the device’s camera, include “Afrikaans, Greek, Hebrew and Serbian.” Google notes that the update brings the total number of supported languages supported for the camera translations feature to 34.

The new version of Google Translate for Android is available for free on Google Play now.

After hitting 5 million downloads and over 1 billion games played since launching on iOS a little over 4 months ago, betaworks-backed game “Dots” is today making its way to Android users for the time. The simplistic puzzle game, which sees users “connect as many same-colored dots” as they can during a 60 second timeframe, will be available as a free download sometime later today.

The announcement also comes with a new “moves mode” that does away with the time restriction but introduces a 30 move limit, as well as new trophies and support for a number of new languages, including: German, Spanish, French, Chinese, Italian, Japanese, Korean, Portuguese, Russian, and Arabic.

Keep an eye on the Google Play store for the Dots game arriving any minute now. END_OF_DOCUMENT_TOKEN_TO_BE_REPLACED

While hundreds of millions of Spanish speakers around the globe have had the option to use Gmail in Latin America Spanish since last year, a number of other popular Google services didn’t offer the Español language setting. Now, Google has announced on its Official Gmail Blog that it is expanding support for its Latin American Spanish language option to Google Calendar:

If you’re new to Calendar but already using Gmail in Latin American Spanish, just visit google.com/calendar and language settings will be ready to go. If you’ve used Calendar in the past, you’ll need to update your language settings by clicking on the gear icon in the mid-upper right of Calendar, then selecting Settings: Once in General Settings, Language you can select Español (Latinoamérica).

You’ll also be able to access the Español (Latinoamérica) setting for Calendar on Android devices through your device’s “Language Settings” within Settings.

Google announced an update today to Google Translate for Android that brings an extremely useful feature for those who are traveling or in need of translations when without an Internet connection. Starting today, the updated Android app will now allow users running devices on Android 2.3 and up to access the service using downloadable offline language packages.

Google noted that there are currently around 50 languages available for offline use and detailed how to download the necessary packages through the app:

While the languages packages provide everything you need to get quick translations when offline, Google warned that the offline modes are “less comprehensive than their online equivalents” without explaining in detail.

Users of the updated app will also now be able to translate vertical text for Japanese, Chinese, and Korean—using their device’s camera.

The updated Google Translate app for Android is available now through Google Play.

Buying an iPhone 13 in some countries requires more than 3 months of work, research shows

Poll: What’s your favorite feature of iOS 15 and iPadOS 15?