After rolling out a Material Theme navigation drawer last week, Google Photos for Android is set to receive backup status indicators right in the gallery view. The app is also adding support for Android Foldables ahead of next week’s Samsung Galaxy Fold launch.

The “What’s new” section of the Play Store for Google Photos was recently updated (via Android Police) to note these two new additions.

We’ve launched a new gallery view to help you see which of your photos and videos have not yet been backed up and proactively choose items to backup. Additionally we’ve introduced several improvements to make Google Photos compatible with foldable devices.

The feature is different from what’s long been available in Google Photos for iOS, which just adds a slashed cloud icon to the bottom right corner of pictures and videos that have yet to be uploaded. With this “new gallery view,” users can “proactively choose items to backup.”

At the moment, users can expand the upload indicator to see a small preview of what image is currently being backed up, or view each photo individually to check the upload status in the top-right corner. 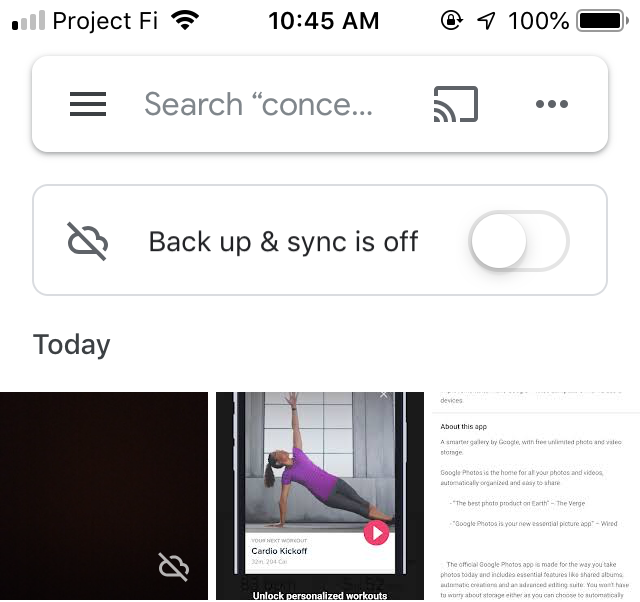 Another update today introduces “several improvements to make Google Photos compatible with foldable devices.” This comes as the first Android Foldable is still scheduled to launch next week with the Galaxy Fold. After Samsung’s device, the Huawei Mate X is expected, with more devices likely coming throughout 2019.

Google did not detail the support in Photos, but it likely involves screen continuity and multi-resume. The former allows an apps to automatically transition from one screen to another with respect to the new layout and density, while the latter lets multiple apps remain active.

Version 4.14 of Google Photos widely rolled out last week, though the release notes could be referring to a new update introduced on Thursday as the backup status indicators are not yet live.