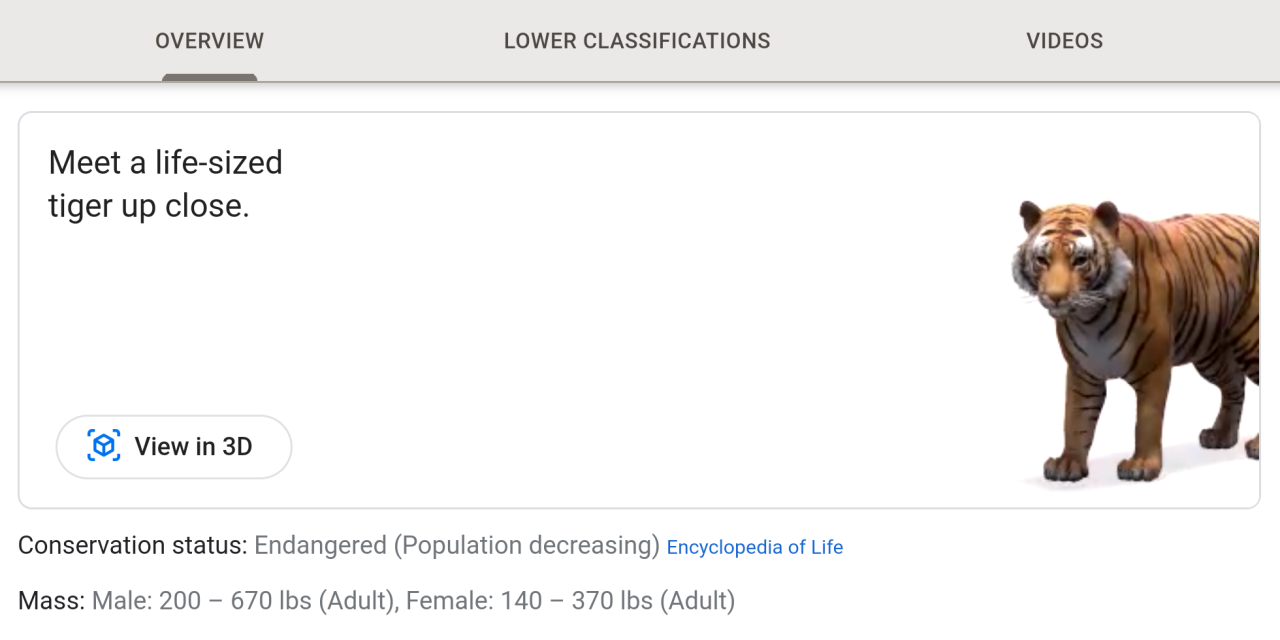 At I/O 2019, Google announced a slew of AR features, including Dining and Translation filters for Google Lens. The ability to preview animals via augmented reality in Google Search is one of the more whimsical additions and it’s now live.

AR in Search is part of Google’s belief that the “easiest way to wrap your head around new information is to see it.” By being able to place 3D objects directly in front of users, they can get a “sense of scale and detail.”

For example, it’s one thing to read that a great white shark can be 18 feet long. It’s another to see it up close in relation to the things around you. So when you search for select animals, you’ll get an option right in the Knowledge Panel to view them in 3D and AR.

These new AR animals in Google Search can be accessed right from the corresponding Knowledge Panel, with cards providing a preview and prompt to “Meet a life-sized tiger up close.” The “View in 3D” button launches the experience.

The interface for interacting with objects is like Google Lens. A Google logo appears at the top with a sheet describing the object you’re interacting with. These creatures feature sound effects that automatically play as you spin and zoom on an object. A tap anywhere will remove controls for a fullscreen experience.

Augmented reality comes into play with a button to “View in your space.” On initial launch, users are asked to “Give access” to camera and device storage to “Get a better look.” Users who have experienced mobile AR in the past will be familiar with prompts to point at the ground and move around. A button in the bottom-right corner returns you to the animal against a white background.

Available Google Search AR animals include: lions, tigers, bears, alpine goats, timberwolves, European hedgehogs, angler fish, and emperor penguins. Some creatures like giant pandas will be eating a piece of bamboo, and are available on AR-compatible devices through Chrome and the Google app.

Google is also partnering with NASA, New Balance, Samsung, Target, Visible Body, Volvo, Wayfair, and others to surface third-party content in the future. This could include shopping use cases or human anatomy as a study tool.

What’s black and white and AR all over?

A giant panda in Search. pic.twitter.com/P4M2ki7uMe