Galaxy Note 10: Everything we know about Samsung’s new superphone [Video] 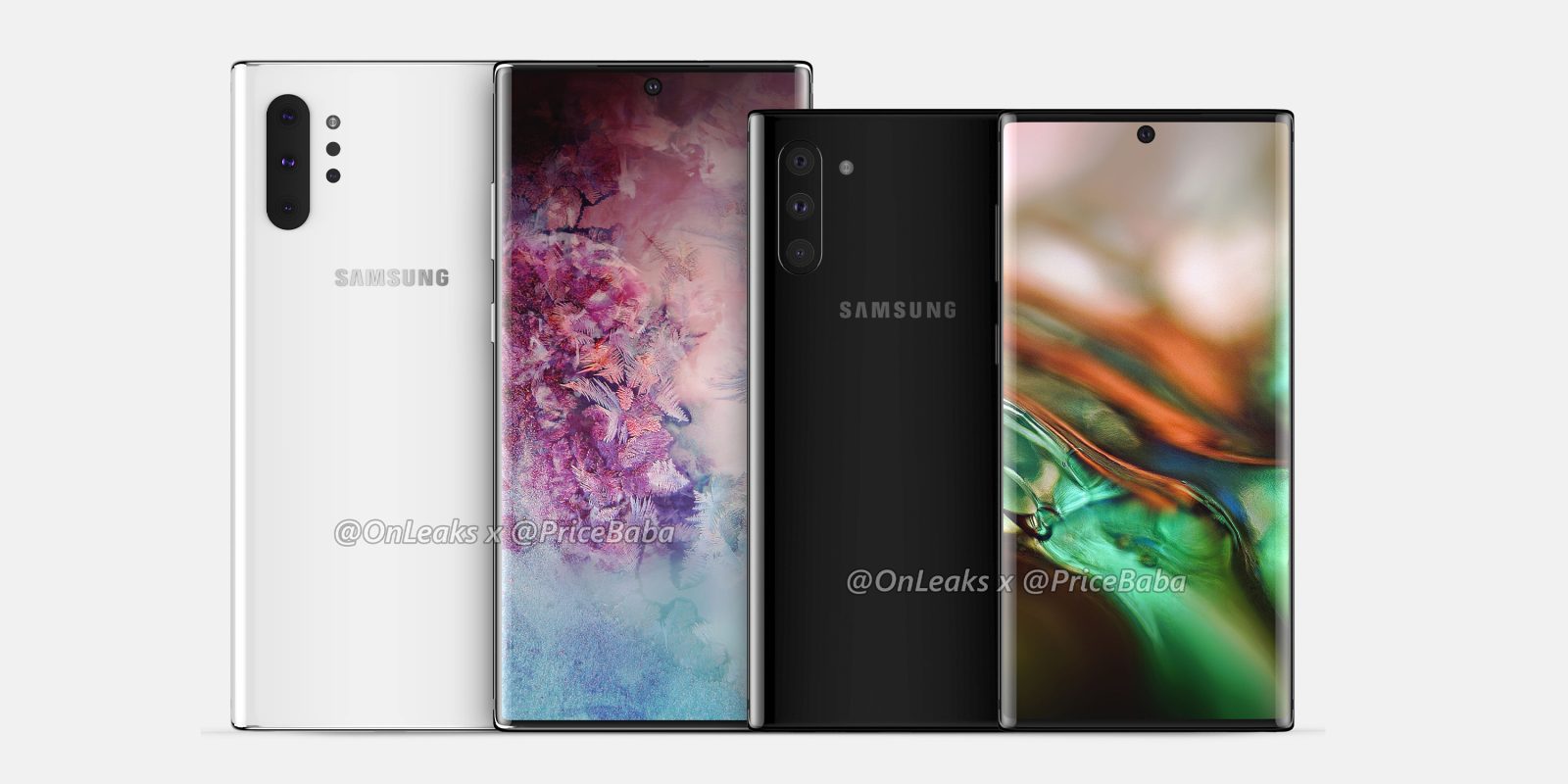 Ahead of the launch of the Samsung Galaxy Note 10, we have quite a bit of information and plenty of rumors to delve into.

Always the biggest of the Galaxy line, the Note 10 looks set to slightly buck the trend of “all-out Galaxy” due to some core removals. Some of these omissions might annoy some of the more hardcore Samsung and Note fans out there. We just hope that the introductions are enough to keep people happy — although we’re genuinely not too sure about that.

In the past, the Galaxy Note line has always felt more like a “revision” of the Galaxy S line, by adding more productivity features and enhancements that take advantage of the — normally — larger display and S-Pen support.

In recent years, though, the Galaxy S seems to have encroached a little too close on the Note. This year looks set to be the first time in a while that we’re seeing the return of true differentiation — in the design, at the very least.

This is every rumor, tidbit, and snippet of information we know so far about the Samsung Galaxy Note 10. 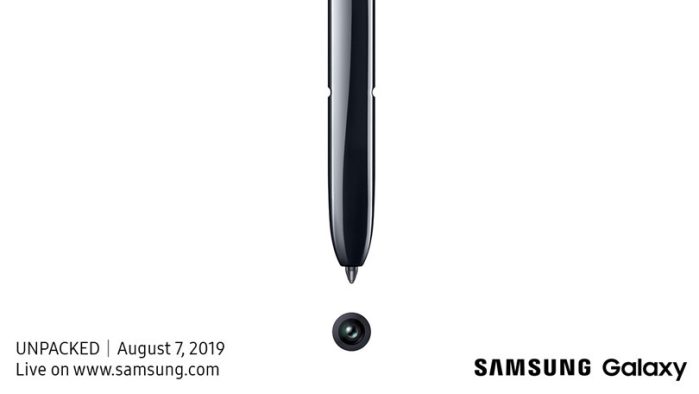 We know that the Note 10 Unpacked 2019 event is set for August 7 in New York City. As for availability, reports suggest that the lineup will go on sale in South Korea on August 23, closely followed by other markets globally.

We are expecting two devices to be shown at the keynote, although there are rumors of a 5G-powered Note 10 that could be announced, too. This would definitely fit in line with the Galaxy S10 5G we saw announced earlier this year. Of course, this is still speculation, so take it with a massive pinch of salt as conflicting reports suggest that one of the two guaranteed devices could offer 5G support. 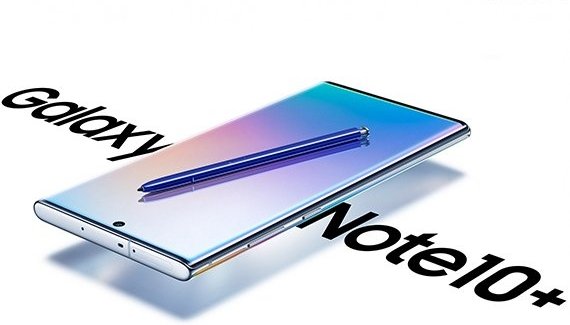 As the Samsung flagship line of 2019, the Note 10 and Note 10+ will go all out as you would expect. That means a Snapdragon 855 chipset — although unfortunately, we won’t see the overclocked 855 Plus — at least 8 GB of RAM, and up to 1 TB of internal storage. Europe will get the new 7nm Exynos 9825 chipset rather than the Snapdragon equivalent.

The superb OnePlus 7 Pro has superfast eUFS 3.0 storage, and while we aren’t 100% sure, we do believe rumors that the Note 10 and Note 10+ will come with the faster storage. That should make the device blazingly fast in the same way that the OnePlus 7 Pro is.

As for battery capacities, notorious smartphone industry leaker @IceUniverse stated earlier this year that the Note 10 Pro (now known as the Note 10+) will come with a massive 4,500 mAh battery. The slightly smaller (but still large) Note 10 is expected to come with at least a 4,100 mAh battery to match the Galaxy S10+.

Any potential Note 10 5G variant could go larger still, if it is indeed a separate model like we saw with the S10 5G. Could we see the first Samsung flagship with a mammoth 5,000 mAh battery? We don’t have too much longer to wait to see if that will be the case.

There are some odd differences between the two known models, though. The charge speed of the Note 10 standard will be capped at 25 W, whereas the Note 10+ is expected to come with 45 W charging capabilities. The downside is that Samsung could ship with a 25 W charge brick in the box — meaning the disappointing added cost if you want 45 W charging. Wireless charging is rumored to be supported up to 20 W, though. 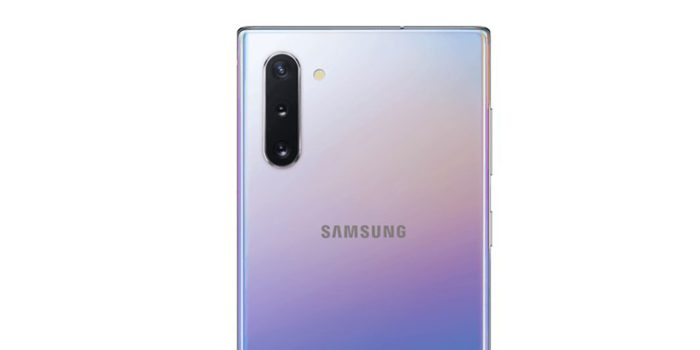 The camera on Samsung phones has always provided the more punchy, vibrant alternative to images produced by the Apple iPhone. While we are sure that this is likely to be the case yet again with the Note 10 and Note 10+, we know that the device will come with a quad-camera set up in an unusual — at least for Samsung — vertical lineup in the upper left corner position at the rear.

It’s unclear what the front-facing camera will bring to the table. With the S10+ coming with dual front-facing cameras, it will also be interesting to see what is sacrificed from the selfie-shooting capabilities now that there is only one camera cutout in the display.

We originally heard murmurs that the new S-Pen could come with an in-built camera. While that would be very cool, it is highly unlikely, and would arguably produce terrible images and video if ever implemented at this stage. Don’t get us wrong, it would still be unbelievable to have the option to act like James Bond with an actual real-life spy pen.

Thanks to the FCC and some leaked hands-on images, we have seen most of the Note 10’s design. From those, two of the biggest changes that we are expecting are most definitely double-edged swords. On the one hand, the rumored removal (via leaked renders) of the Bixby button is bound to be popular for many who feel it’s a half-baked Assistant compared to the Google Assistant.

One the other hand, there could be a ruckus from fans at the potential removal of the headphone port. In the past, Samsung has made a big deal about keeping it on Galaxy devices when the entire industry is busy killing off the port. That means there is the potential of no 3.5 mm jack compatibility unless a USB-C to headphone port adapter is used.

In terms of sizes, the Note 10 standard will have a 6.3-inch display with the Note 10+ set to have a 6.75-inch display. The massive sizes help accommodate the S-Pen, which naturally is going nowhere. While the Bixby button is set to bid farewell, rumors suggest the Note 10 would ditch all physical buttons.

That is not the case, as we will still see a physical sleep-wake button and volume rocker. It’s maybe a little early in the smartphone lifecycle to release a device with no physical buttons whatsoever — although we’d love to see it.

We saw the S10 bring in a wealth of new colors to the top-tier Samsung lineup. Since launch, there has been a few regional exclusive releases of limited-edition, two-tone colors. The Note 10 is expected to have at least five gradient colors to choose from: Black, Silver, Lavender, White, and Pink.

These new finishes are said to exceed the two-tone gradient finish as found on the Huawei P30 Pro. Instead, they are said to have much more variation depending on lighting and angle at which you look at the Note 10 rear panel. 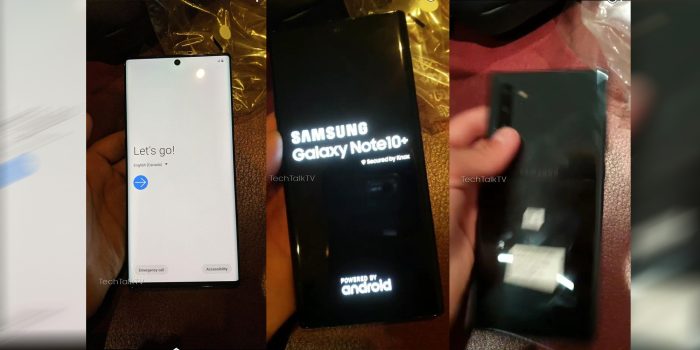 Arguably the biggest change to the Note line will come here with the Note 10 and Note 10+. While the superb Note 9 has a fantastic display, it does feel a little bit dated compared to the S10 — that isn’t to say that top and bottom bezels are bad, though, as I personally prefer the Note 9 design to many notched displays on newer models.

The Note 10 will be the first in the Galaxy Note series to come with an Infinity-O display, although it has been revised slightly. The punch-hole is moving from the upper right position we’ve seen on this year’s Galaxy S10 to the top middle of the display. It also appears to have been reduced from a double camera to a solo camera. That central position should make selfies a little easier, but it will be interesting how the removal of one camera will affect end results.

Samsung is also upping the screen-to-body ratio significantly, with an impressive 83.9%. That is kicked to the curb with the Note 10, which will come with an insane 90.5% screen-to-body ratio. When you consider that the front-facing camera is still present, that is very impressive. Considering that the sizes come in at 6.3 inches and 6.75 inches, respectively, that is a heck of a lot of real estate to play with, especially on the Note 10+.

Speaking of the actual display quality, snippets from @IceUniverse suggests that this will be the display to beat in 2019 — as you would expect. It is unlikely to come with a high refresh rate, though. 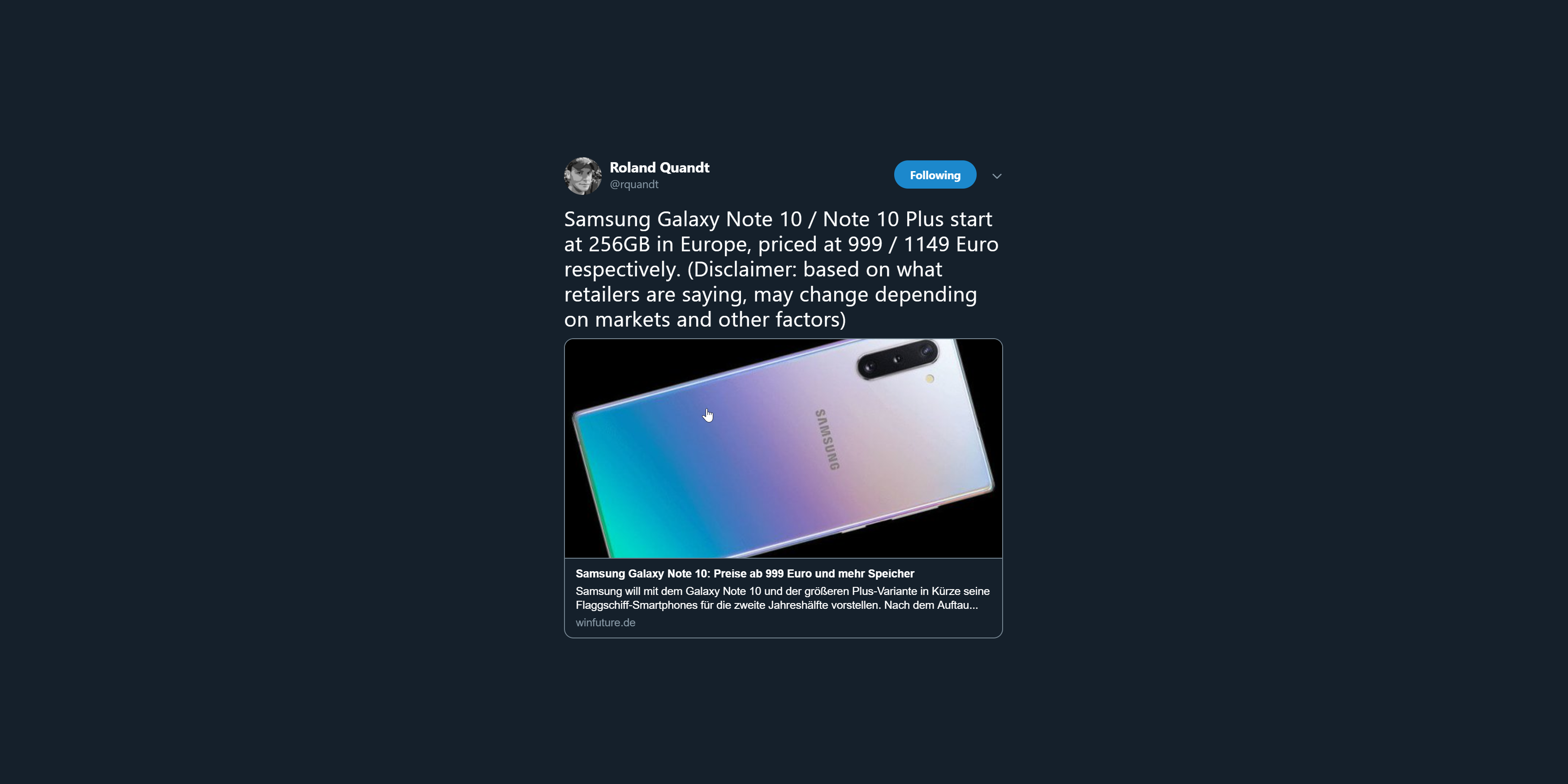 Ahead of the global launch, thanks to WinFuture stalwart Roland Quandt, we have some information about the proposed European pricing of the Note 10 and Note 10+. That said, it is unclear how this will translate to localized currencies, including US dollars.

The standard Note 10 is expected to come with a recommended price of €999 (~$1,126) according to retailers, whereas the Note 10+ is expected to start at €1,149 (~$1,249). These prices might not reflect regional variations and taxes, but offer a glimpse of what we can expect come launch day.

When you consider that the Samsung Galaxy S10 started at the same price but came with just 128 GB of storage, it does make the Note 10 initially seem to offer slightly better value.

It looks like thanks to rumors and renders, we’ll be saying goodbye to wired audio on the Note 10, and therefore, the entire Note line for the very first time. No Samsung flagship has dropped the headphone port until now, but unfortunately, it does not look good for fans of wired audio.

According to XDA‘s Max Weinbach, micro SD card expansion will only be possible on the larger Note 10+. His source has stated that the standard Note 10 will forgo external storage expansion, again, for the very first time.

Given that we saw the Note 9 release with Android Oreo last year, we don’t expect the Note 10 to come with Android Q at launch. We do expect One UI 2.0 to launch later in the year, following the same sort of release schedule, as with the Note 9 and Galaxy S9.

We want to open up the floor to you: What beyond the leaks and even including the leaks would you like to see come launch day? We are now on a countdown to August 7, where we’ll finally get to see the Note 10 and Note 10+ in the flesh for the first time at Unpacked NYC.

Let us know in the comments section what you are hoping to see at Unpacked, or what you don’t want to see. Remember to keep it civil.