While Assistant in the U.S. has 11 different voices, Google users in other parts of the world only have one. Google Assistant on Android, Home, and Smart Displays is now adding a second voice in nine different languages.

Assistant launched with a single voice — known as “Holly” — before gaining a male one in 2017. Last year, Google added six new voices at I/O and rounded out the year with two more. Google also switched to a color-based naming scheme where Voice I became Red, Voice II Orange, etc.

This system was born out of Google not wanting to apply any labels on voices. It actually makes for fun whimsical names like “Sydney Harbour Blue” and “British Racing Green.” Both are clearly identifiable, while being actual colors. The last addition was in April with the John Legend “Cameo” voice that brought the U.S. English total to 11.

This week’s expansion is focused on giving the rest of the world their first alternative. Nine Assistant languages are gaining a new voice: English in the UK, English in India, French, German, Japanese, Dutch, Norwegian, Korean, and Italian. After the roll out, “Red or “Orange” will be available, with Google randomly assigning a voice during set up. 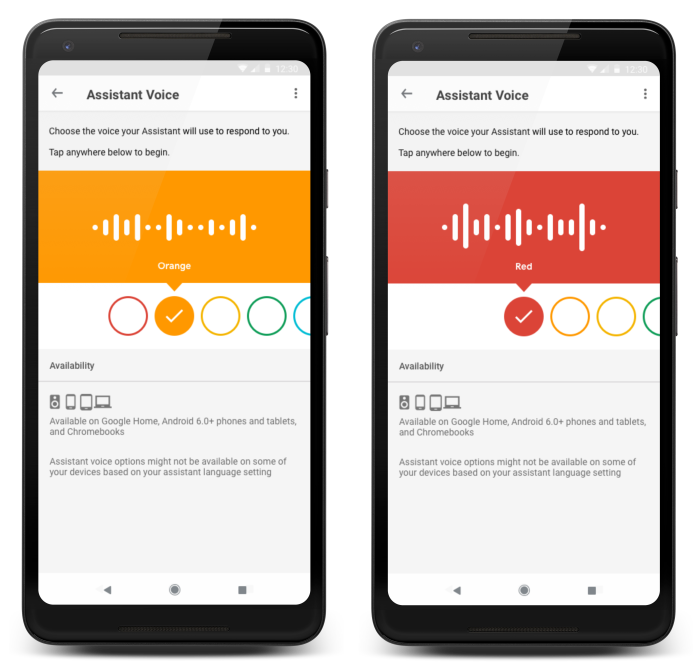 Behind-the-scenes, all of today’s additions were built using DeepMind’s WaveNet speech synthesis model. Deep neural networks create raw audio waveforms that are more realistic and natural with great pitch and pacing. Google took care to make sure Assistant understands the way people in those countries talk, accents, cultural references, and geographic markers. The goal is to create voices that sound like a natural speaker.