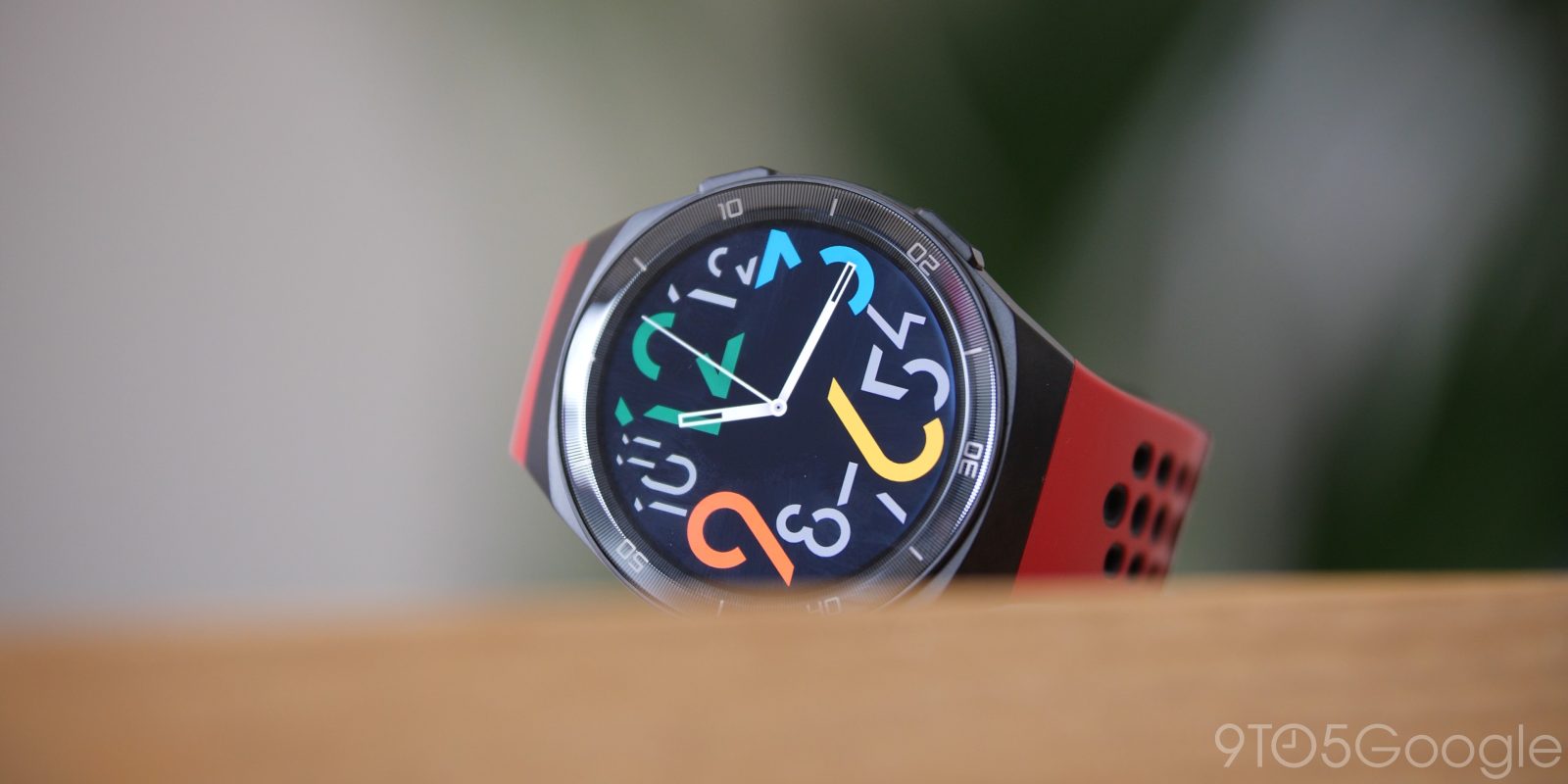 While US-trade restrictions hamper Huawei’s smartphone aspirations in Western markets, the ace up the sleeve is undoubtedly it’s growing wearable selection — of which the Watch GT 2e is another fantastic addition.

After COVID-19 lockdowns were imposed the world over, causing limited access to gyms and fitness centers, fitness-tracking wearables have literally exploded. You may remember the Huawei Watch GT 2 that launched alongside the Mate 30 Pro in late-2019. Well, this is a properly sport-focused refresh with some added features, some notable omissions, and tweaked outer shell.

Wear OS is not a bad platform but continues to flounder due to chipset limitations and real lack of enthusiasm from the industry beyond Fossil. Like it’s predecessors the Watch GT 2e does not rely at all on Wear OS, it runs LiteOS.

That means that there are effectively no US trade ban roadblocks, meaning that you should be less hesitant to consider a Huawei-branded wearable product than you might a smartphone.

Comparing directly to the Huawei Watch GT 2, the 2e instantly resembles a “traditional” digital watch. Is that a bad thing? By no means but it’s worth noting that plastic and silicone dominate here.

After all, this is a sport-focused smartwatch. Added mass and bulk can be frustrating aspects of the “catch-all” smartwatch — and it was one of the minor problems of the GT 2.

The AMOLED display is still a major selling point. It’s bright, vibrant, and bleeds into the edges of the bezels making it feel even larger than 1.39-inches. A new frame means that the silicone strap fuses with the body unlike the leather strap on the previous generation. I find it more stable when strapped to my wrist, which is likely important to the proper active person. You can still change straps if you wish too.

At the sides, the rounded crown buttons have been altered too, with the Watch GT 2e having flat buttons akin to a standard digital watch. This is instantly more comfortable if you are moving your wrist at angles and in a circular motion.

I’m a huge fan of the vented silicone band design, as this means that my wrist doesn’t get overly clammy or sweaty. It’s very reminiscent of the Apple Watch Nike Edition but it’s a good design for active tech. 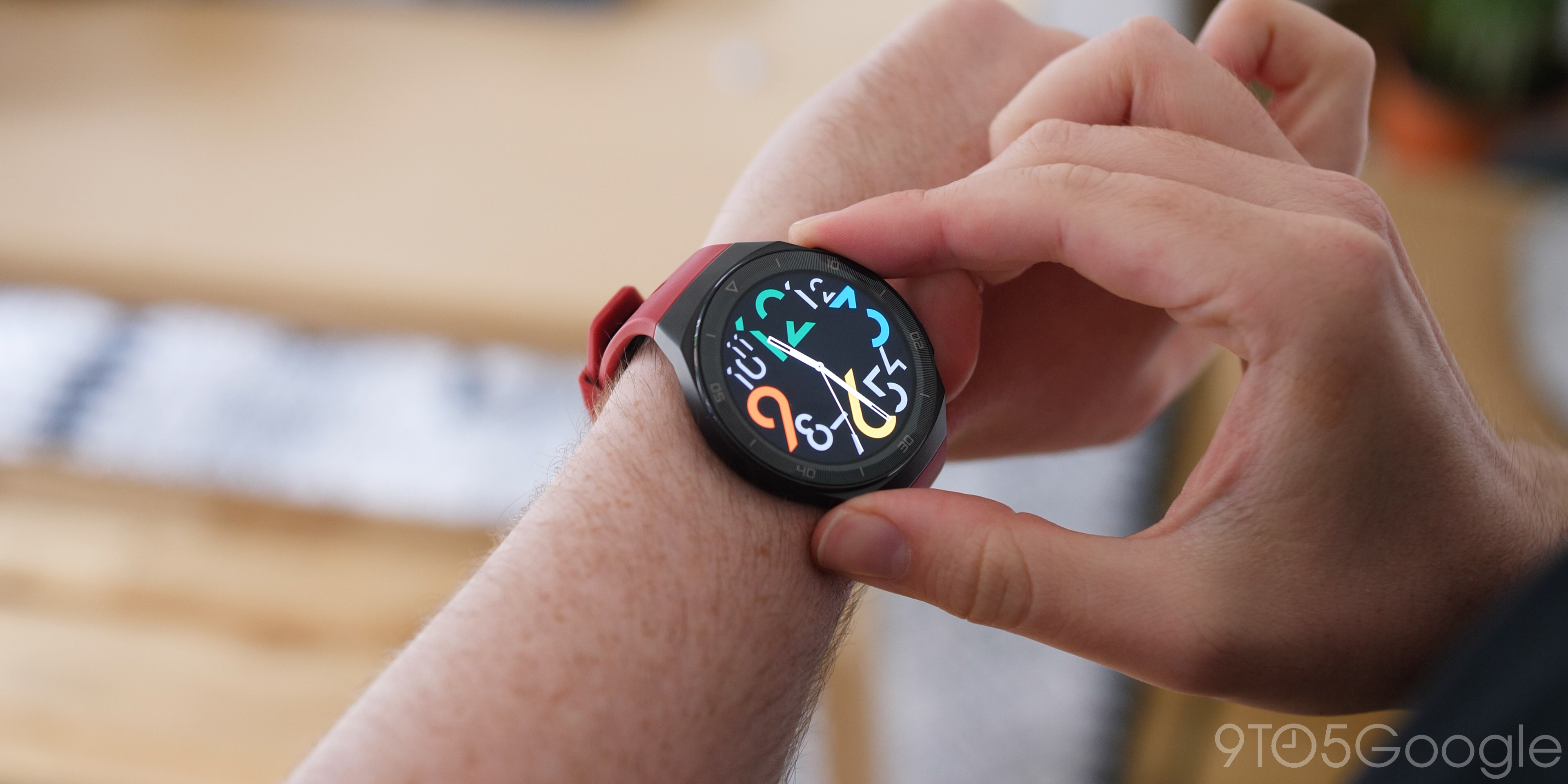 I was highly critical of LiteOS on the original Watch GT but my stance has softened with time as I realized how little I needed perceived “high-end” performance on my wrist.

Back when the original GT 2 launched, there were rumors that we might see the highly anticipated HarmonyOS pre-installed but those rumors were unfounded. LiteOS is very stripped back, to say the least, but does “enough” to make the Watch GT 2e a great everyday companion. By stripped back I mean that you’ll only be able to do things like view notifications on your wrist — no ability to respond or reply directly.

Understandably for some of you, this might be an instant dealbreaker, and at first, it was for me too. While it would have been nice to have a smartwatch-controlling computer strapped to my wrist. Being someone who is constantly bombarded with notifications, it actually is nice to just have some peace. I tend to turn off non-essential apps and enjoy the Watch GT 2e simply being a digital watch with extra fitness and GPS features.

Sometimes you will notice sluggish spots — although I have run pre-release and consumer software since launch. Like the previous model, a prime example of this is when changing the watch face. You can’t install any applications, and the pre-installed selection is thin on the ground so, in reality, day-to-day performance doesn’t need to be stellar at all times.

You also get a dedicated music app with the ability to store up to 500 tracks. My biggest gripe is that you still have to beam them via Bluetooth from your phone to your watch using the Huawei Health app. It would be nice to get a streaming service option as actually storing .mp3 files on my smartphone is not something I have done for a long time. That said,  not having to bring your phone with you on a run while connected to Bluetooth headphones is a massive bonus — you can connect to Bluetooth earbuds with no issues.

Huawei has taken out the microphone on this model also, which means that if you want to make or take phone calls from your wrist, you’ll need to opt for the Watch GT 2 over the GT 2e. 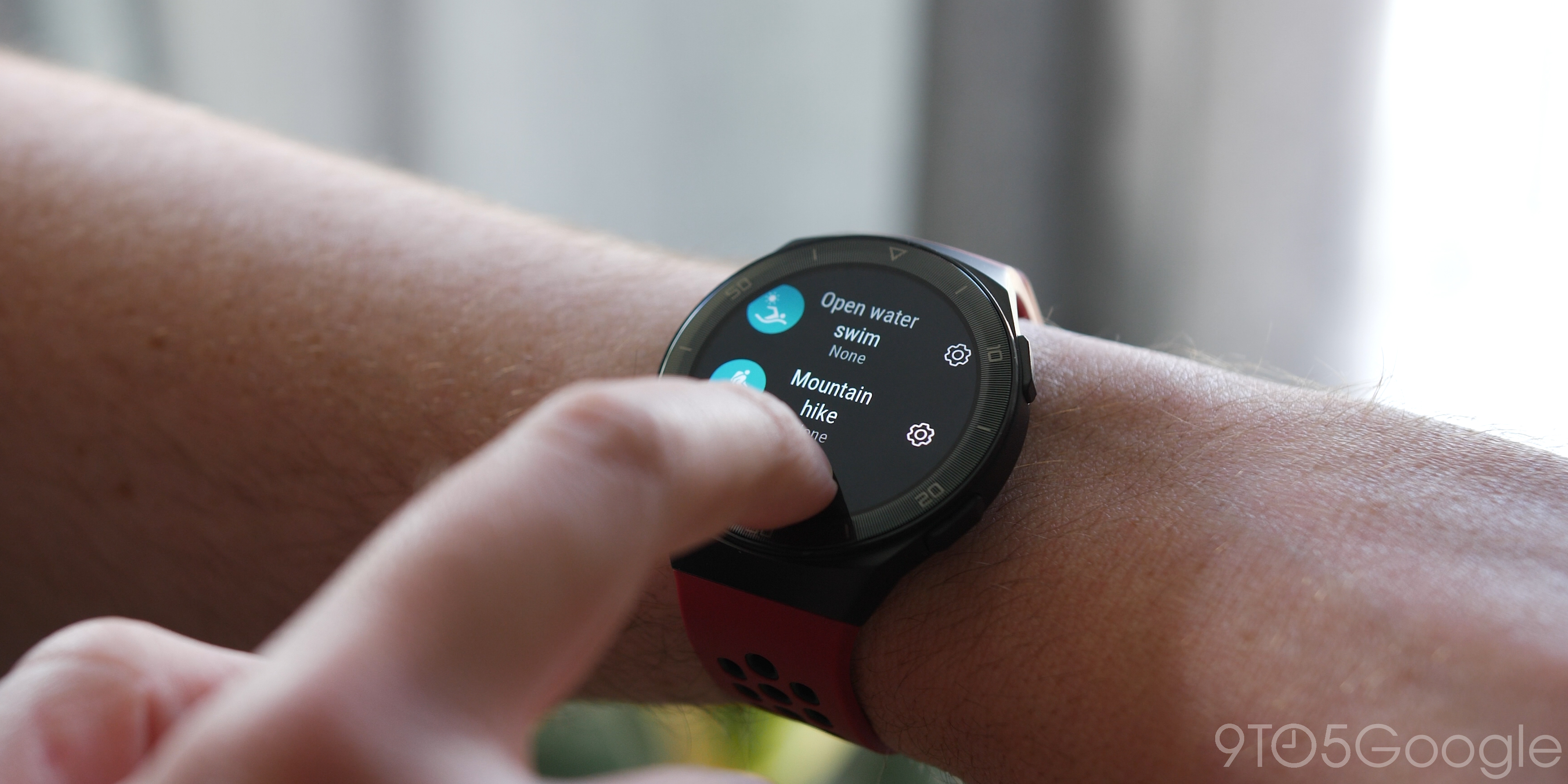 The Huawei Watch GT 2e can automatically detect up to six different workouts. You get a decent amount of data when finished too. It’s when you sync with the Huawei Health app that you’ll get far more detailed information and analysis.

With lockdowns in place, regular walks and light workouts have been about the most that I’ve been able to track. There are even some extra inclusions that have been added specifically for this fitness-inspired design. Having a SpO2 sensor for monitoring your blood oxygen levels might be of particular use to ultra-marathon runners but for the average person, probably just a bit overkill.

Fitness tracking features are where the Watch GT 2e still excels. With 15 exercises included as standard alongside the basic step tracking. The heart-rate tracking appears to be particularly accurate and ties in well with the Stress and Breathing exercises.

I have tried the sleep tracking feature but found despite the slight hardware changes, the size of the watch meant that it was quite uncomfortable for all-night wear. I’m still of the opinion that sleep tracking is better suited to lightweight band-style watches — like the Xiaomi Mi Band series — than those with a traditional shape. The stress rate tracking also returns on the GT 2e, this measures your heart rate at certain points to determine your stress levels. Again, I’m not actually sure if it even works but the initial questionnaire is still pretty hilarious. 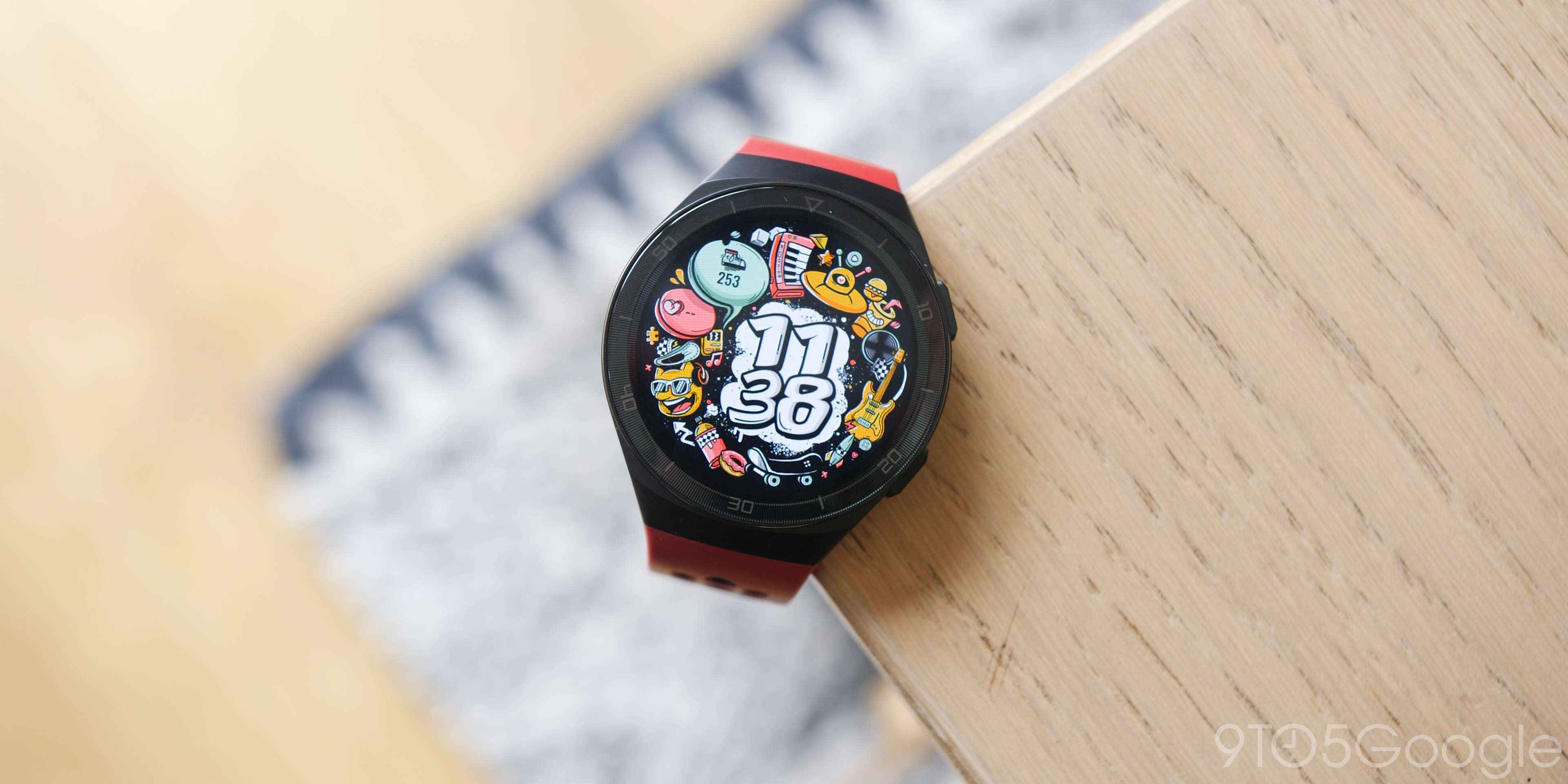 Make no mistakes, the comparably slow or sometimes choppy performance is offset by the battery life on the Huawei Watch GT 2e. If you care about lifespan, this, again, is one of the very best. As I said back when reviewing the GT 2 model, not having to go and dig out a charger every night is oddly liberating.

Huawei claims the battery can last up to two weeks on a single charge, throughout my time using the Watch GT 2e, I would say that is likely true for inactive people. In reality, I’ve found 10 days to be about the sweet spot for a reliable lifespan. That is still impressive and running out in a day is no issue — plus the charger is pretty fast to boot. 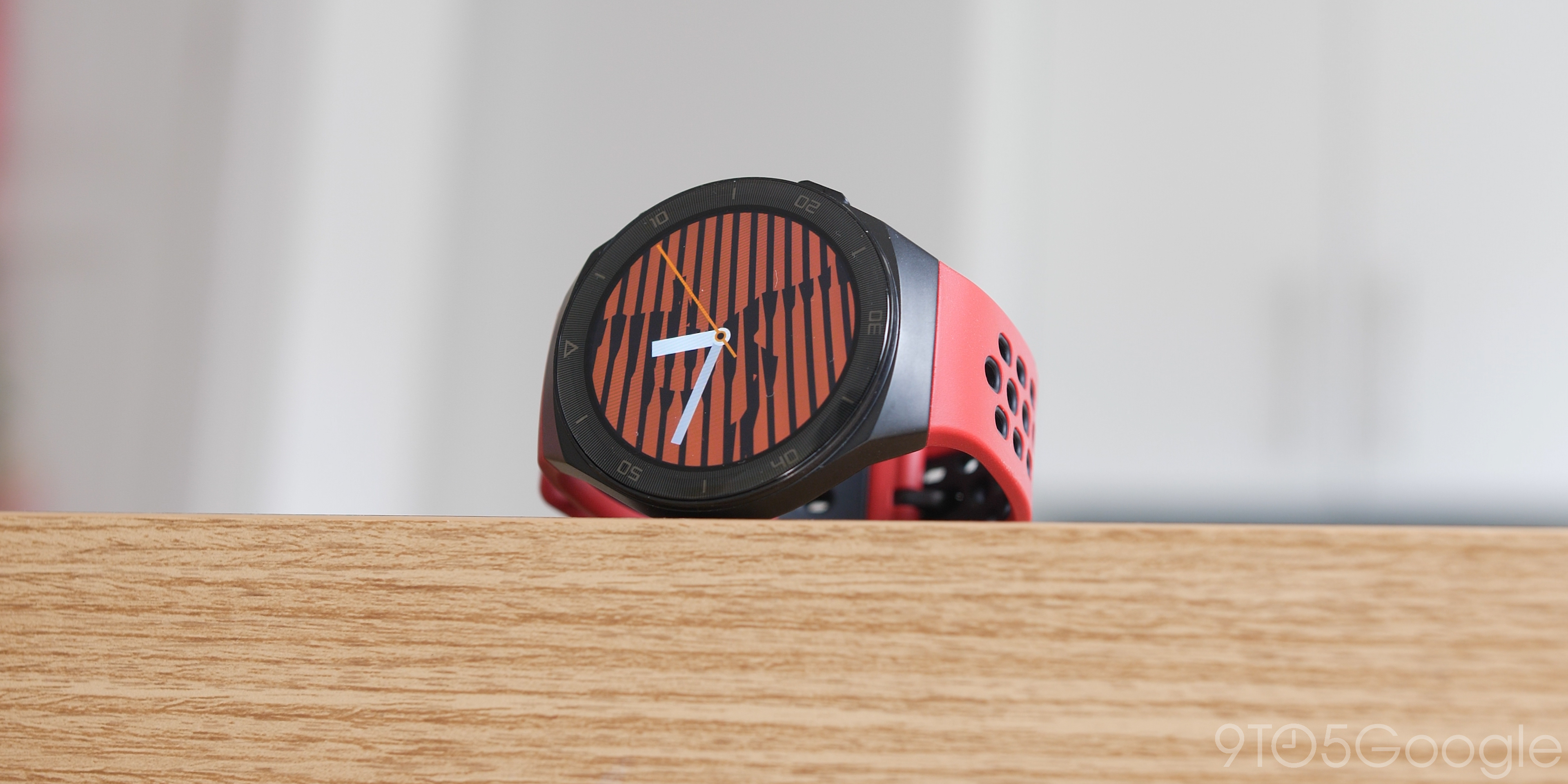 You could be forgiven for wondering what the future might hold for Huawei smartwatches and wearables. After all, you’d be right to question the long term support and commitment to ensuring your products are given the attention needed long term.

So it is likely great news to hear that in a closed interview in recent weeks, Huawei’s Chief Brand Officer Andrew Garrihy confirmed to 9to5Google — and other select media — Huawei is committed to wearables long term. It will be one major avenue of growth for the Chinese firm in the coming years. With major sales milestones and a growing market share in a declining market, it’s one area that has been seemingly unaffected by the US-trade bans that are stifling the meteoric growth of the tech firm.

That doesn’t mean that future smartphone launches are to be curbed in favor of wearable hardware though: “We’re seeing growth in smartphones and we’re seeing great growth in wearables. We’re number three in [Android] tablets.”

As the firm builds up steam with its Huawei Mobile Services and the AppGallery, maybe we’ll also start to see far more fully-featured smart wearables. For now though, if you’re a fitness buff wanting a wearable companion that doesn’t break the bank, look no further than the Watch GT 2e.

Where can I get the Huawei Watch GT 2e?

At around $125-$140 from sites like Amazon, the Huawei Watch GT 2e is a solid smartwatch companion. However, if you want something a bit more feature-packed, then the Watch GT 2 is still a great purchase for around $180.