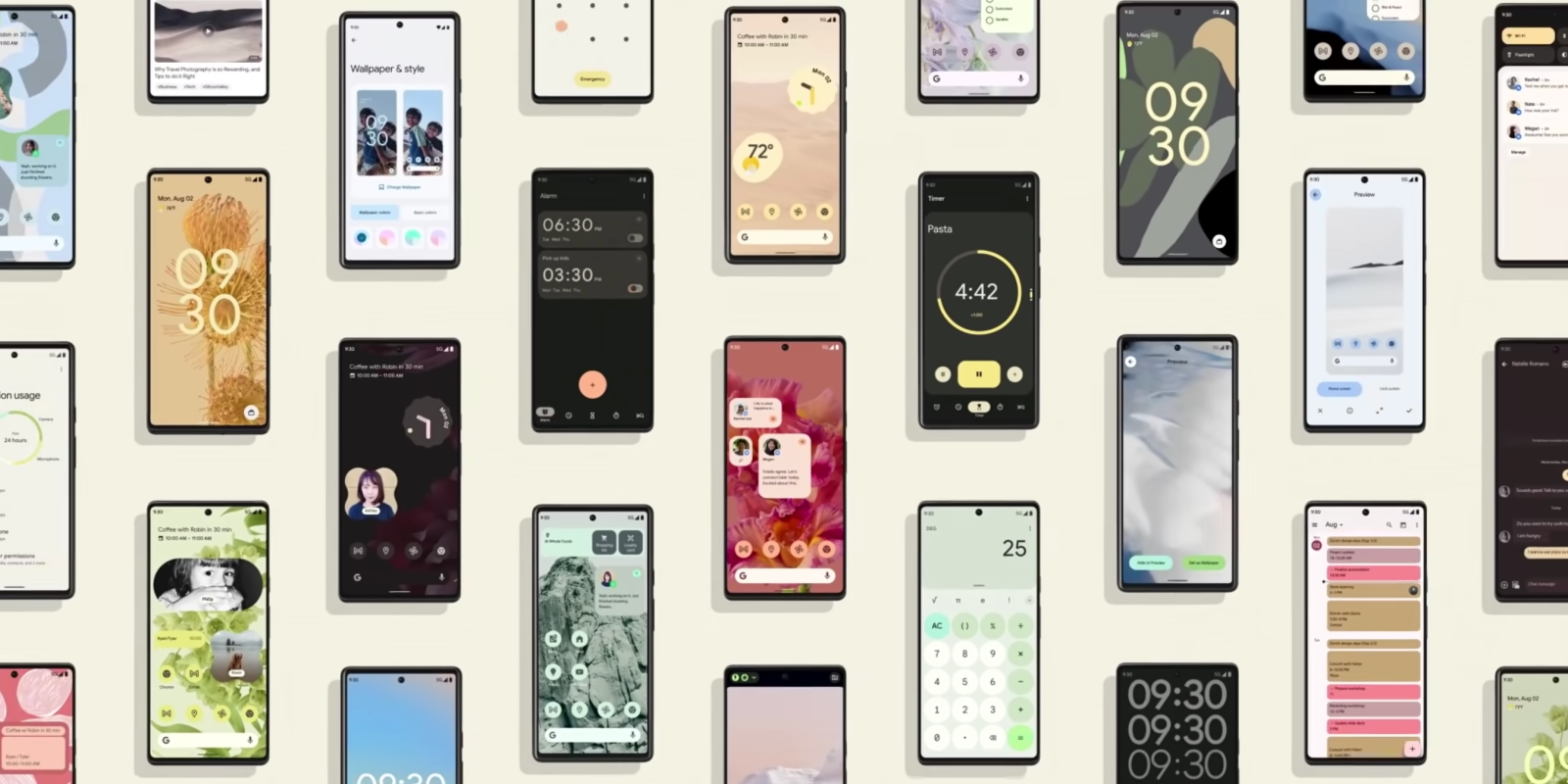 Compared to the last design language revamp, Google’s rollout of Material You is happening at a much faster pace. That Material You app update blitz comes amid a barrage of Pixel 6 advertising and that’s no coincidence. It’s the sign of a well-under-way vision at Google that has been sorely missing.

Material You was officially announced at I/O 2021 in May as Google’s hyper-personalized approach to designing apps and other UIs that adapt to users. The goal is to give people — billed as “co-creators” — “more expressiveness and control over their personal devices.”

The primary aspect of Material You is wallpaper-based theming. Pixel phones look at your background and create a palette to color the system interface (notifications shade, settings, etc.) and applications. This results in a giant hued clock on your lockscreen, while Gmail and Messages – places where most users spend a great deal of time – no longer feel generic.

Giving everything a uniform color that isn’t stark white or gray is delightful in a way I did not foresee. I initially found the splash of colors refreshing, but that’s since evolved into a deeper appreciation. Switching from Gmail on my Pixel to gmail.com on a laptop now feels quite stark. The latter feels rather generic and the (exact same) information does not feel personalized to me in any way. It’s an odd feeling, but I’m growing more and more fond of the consistently applied hues.

The other physical change made by Material You is to various button shapes and sizes. This feels almost perfunctory with any design language revamp, but the modernization is appreciated. One of the more notable changes here is a taller bottom bar, with larger touch targets seemingly the goal. The focus on tappability has resulted in a curious widget that’s shaped like a flower, which appears to be how Google officially refers to that design.

It’s bulbous and vaguely organic in a way that might grow on some people, but far from guaranteed. That might be a sign that Google will let you choose shapes in the future for widgets. It would make sense for a Google Photos widget, but Android 12 did just remove app icon customization with seemingly no immediate plans to bring it back.

All these nice aspects of Material You are easy to pick up on because Google has very quickly rolled out redesigned apps. It of course started in Android 12 with a new lockscreen, notification shade, and quick settings. Google Camera, Gboard, and Files, all system-adjacent apps, followed.

The first big redesign was Google Contacts in mid-August with the Pixel Launcher’s Discover feed and Lens following. Android 12 Beta 5 at the start of last month saw Google Clock and Calculator. Then came the big announcement of several Google Workspace apps.

Gmail’s Material You redesign started rolling out on September 2 and was widely available two weeks later. In contrast, the previous Google Material Theme was announced in May 2018 and Gmail was first previewed with that design two months later. It started rolling out in January 2019 before becoming fully available in mid-February. Similarly, Google took forever to introduce dark themes across all of its apps with Google One skipping the night-friendly look entirely until Material You.

This quick turnaround is even more impressive when you consider how modern Gmail is three applications in one. Meanwhile, other completed revamps for big apps include Calendar, Docs/Sheets/Slides, and Keep.

One reason the redesigns are moving so quickly is because Google wants to make sure its first-party apps match Android 12 before launch. The Pixel 6 is the other big factor.

More than any other past Nexus or Pixel device, software and design is a very big selling point of this year’s flagship. The Pixel has always had custom software experiences like Google Camera, Recorder, and Personal Safety, but those are more or less created by the same division.

What’s different is how the Pixel 6 is seeing tremendous buy-in from all parts of the company. Android does that every year with the OS, but it’s now the Material Design team in a very major way. Having a personalized color palette, which first required a whole new design system years in the making, is literally a selling point of the phone. With Material You making an appearance in Pixel 6 ads, this is the most public outing for a Google design language.

Meanwhile, the Workspace group is making sure Gmail and other productivity apps are ready in time, while more consumer apps like Photos, Phone, and Messages are ready — if not waiting for — the Pixel 6 to launch. In turn, the phones very clearly takes color (coral and green/fog especially) inspiration from prominent Material You themes.

What’s remarkable about this moment is how in-sync Google software, as led by Material Design, is with Pixel hardware. This tight integration is only set to flourish. After Pixel and the phone form factor, Google explicitly said to expect Material You on the web, Chrome OS, wearables, and Smart Displays.

Save for the web, those three silos represent hardware that Made by Google has a deep investment in. Smart Displays help push Google’s vision of Ambient Computing — which needs expert design (both UI and UX) to feel seamless and succeed — and wearables are seeing new life with Wear OS 3, while there are rumors of a Tensor-powered Pixelbook in the future.

If those marquee hardware launches look anything like this Material You software update lead-up to the Pixel 6, Google will be creating products that offer a complete end-to-end vision that’s not shoehorned. It’s something the company hasn’t naturally offered up in a while.