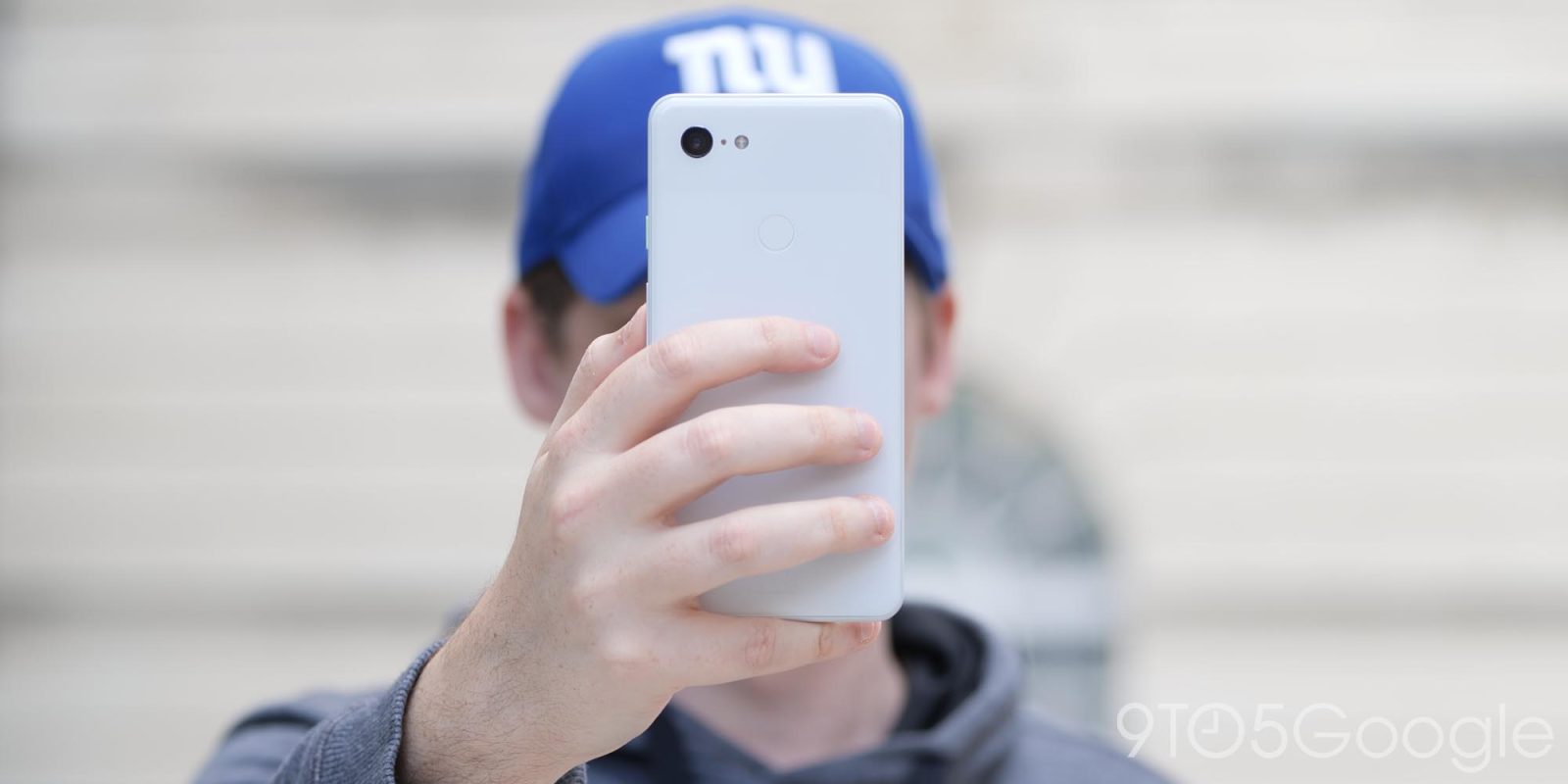 Thanks to the COVID-19 pandemic it feels exceptionally longer than three-and-a-bit years since the Pixel 3 series was officially unveiled back in October 2018. With most people holding on to devices for longer than ever before, just how does Pixel 3 fare in 2022 now that Google has officially dropped support for the handset? Let’s find out.

In the build-up to Made by Google 2018, leak after leak revealed everything ahead of the keynote. It’s a throwback design that has elements of the previous generation but you can see Google becoming more confident in their ability to design a smartphone with neat little personable touches here and there.

For me, the Pixel 3 is the most comfortable that Google has produced. The soft rounded corners and frosted back mean it has – to steal a term our own Kyle Bradshaw coined – “hand feel” of any Pixel to date. It’s borderline perfect with a wide body and thin profile, but the usage of glass ensures that even in mid-2022 the Pixel 3 is sturdy and self-assured.

I used the Pixel 3 XL daily (and nightly) from launch until the launch of the Pixel 4 series, then afterwards as my go-to test device for numerous Android updates and betas. I have to say that in my case it has aged very gracefully, the display has a few nicks here and there but overall it is in beautiful condition. Now that isn’t going to be the case for everyone, but even without a case, the only real degradation has been on the frosted back panel which has some weird lines from being in and out of my pocket over the past 36 or so months thousands of times.

At launch it felt like the end of the aluminum Pixel with the Pixel 3 – but 2020 threw up more surprises. Granted this isn’t such a huge departure from the Pixel 5’s bio-resin finish and aluminum build, in that it certainly feels like a Google-made phone in the same way. The frosted glass finish and curved edges feel great. The frosted glass feels particularly soft to the touch and I’d love to see it return again in future Pixel smartphones.

The Pixel 3 and 3 XL share some core similarities but differ in one key area: that display notch. In reality, the notch was never quite as horrific as it was made out to be. Yes it’s large, heck it’s borderline offensive but if you put it to the back of your mind it’s simply a non-issue. You’re also getting a dedicated wide-angle selfie camera, which although not perfect was an interesting addition to say the least.

You’ll find a 6.3-inch QHD+ AMOLED display on the Pixel 3 XL and a 5.5-inch FHD+ AMOLED display sans notch on the Pixel 3. Both displays are still excellent but don’t quite get bright enough when compared to recent iterations. At 60Hz and with the ageing internals, things are not quite as “buttery smooth” as in years prior but almost all content looks great on the Pixel 3 and 3 XL’s displays. Of course, a huge notch is frustrating for landscape video viewing. Luckily, neither phones were afflicted with the blue tint that hampered the Pixel 2 XL released a year ahead of this duo.

A bigger problem for me is the non-uniform bezels. They drove me crazy when switching back from devices with smaller bezels on all sides but there is room for a bottom speaker and top speaker which results in genuinely superb audio. That’s a big deal given the lack of a headphone port at a time when many other flagship smartphones still offered the input.

As a flagship Pixel package, the Pixel 3 and 3 XL took some of the best design elements of the Pixel 2 and 2 XL, added an IP68 rating for the first time, and then made a few more personable touches that make the duo all the more approachable. The design is understated, which is potentially a criticism you could throw at the previous Pixels but a reason the hardcore fanbase loves the series.

2022 has seen the Pixel 3 receive its final update in the form of Android 12 and the February 2022 security patch marks the end of Google’s official support window. This means it’s a world of third-party ROMs if you want to persevere with the handset in the long term. For me, the Pixel 3 was properly transformed back with Android 10. It added so many features that were needed at launch: a dark mode, proper gesture navigation, smarter battery saver, complete UI overhaul, plus a further 50 extra tweaks and changes on top.

Since then, we’ve seen Android 11 and Android 12 arrive. It’s essentially the same core experience as the newer Pixels. In theory, you’re walking around with a Pixel 5 level experience without the chassis. The comparisons between the Pixel 3 and Pixel 5 are important as the Qualcomm Snapdragon 845 and the 765G stack up very, very closely.

Other than the 90Hz panel and some features not yet available or exclusive to 2020’s Google flagship, the Pixel 3 will perform just as well as the Pixel 5. Putting that into perspective for a second, the Pixel 3 can actually outperform the Pixel 5 in certain scenarios. If you’ve held on to the Pixel 3, you’re probably feeling a little smug right about now.

For people looking to hold on to their device a little longer, that is actually pretty huge. The Pixel 3 and 3 XL sit just on the cusp of what you would and should expect from a 2022 mid-ranger. It’s here where former flagship phones offer the best longevity factor, as time doesn’t diminish the daily experience all too drastically.

Unfortunately, it’s not perfect as there are a number of other problems that affect the software experience here. Firstly, the 4GB of onboard RAM is the biggest performance hurdle to overcome on the Pixel 3 and 3 XL. You’ll see apps thrown out of memory more often than any current generation Pixel and it means that multi-tasking can be severely inhibited.

What’s impressive given the Snapdragon 845 processor is now getting a little long in the tooth, is the gaming performance. You can play some of the most demanding 3D titles at diminished graphical settings. This is undoubtedly the benefit of a flagship processor and highlights the importance of Google’s future Tensor efforts in the Pixel 6 series and upcoming smartphones.

The rear fingerprint scanner is still as fast as it was back at launch. While Android 12 runs pretty darn well. Plus there’s the added bonus of the Active Edge squeeze gesture that is as good as it ever was and something I’d love to return in future as Google attempts to find a new home for Assistant activation via a corner swipe and now a power button press.

A growing number of reports in late-2021 saw Pixel 3 and 3 XL devices becoming unresponsive or bricking completely after a random shutdown. These kinds of problems have been steadily fixed over time but because devices are long out of warranty, any future problems will likely be unresolved.

About hanging in there

It’s a blast coming back to the Pixel 3 camera setup as it still stacks admirably given its age and limited solo rear lens system. That said, while it’s not immediately obvious, newer Pixels using the same Sony IMX363 sensor seem to squeeze a little more out of the same main sensor.

Sure, you don’t have quite as many modes as the latest and greatest but the Pixel 3 series has always produced wonderful results and given that it has the same sensor as the 3a through to the Pixel 5a – and even the upcoming Pixel 6a – you’ll get comparable images. That said, the tuning is not quite identical from device to device, which means some slight variations depending on the model you’re using.

At times, I have found the Portrait Mode to be a little less accurate than newer counterparts and the Night Sight low-light mode has seen major improvements with each subsequent Pixel release. However, looking back at the images I’ve taken with this smartphone since 2018 and I’m still impressed and always happy to share the best of the bunch.

Since updating to Android 12, I’ve found the camera UI to be more responsive than in Android 11. This could have been my unit but it was sluggish at times in the previous OS build and it was a little annoying when trying to take photos quickly. Selfies still look great but the wide-angle shooter might be great for group shots, but it would have been better served at the rear as part of a dual-camera setup there.

Another sad bit of news that some still might not be aware of is that Google has officially ended the free unlimited original quality Google Photos storage for the Pixel 3 series. This ended back in January 2022, but anything you stored online up then is still safe and you get unlimited storage when using the “Storage saver” tier. Every cloud has a silver lining after all.

Time is a cruel mistress

Like most Google-made devices, the Pixel 3 at this stage of 2022 might not be the all-day device you are hoping for. Yes, it had reasonable battery longevity at launch, but without the adaptive battery boosts provided with Android 11 and an ageing internal cell, my Pixel 3 XL does often need a late-afternoon top-up to ensure it lasts a full day.

Battery degradation is something you can mitigate or minimize but not escape entirely. Charging for daily for over three years means that holding a charge is something the Pixel 3 and 3 XL struggle with at this point in 2022. A battery replacement is highly recommended if you do plan on sticking with 2018’s best Pixel.

It’s also important to note that you’ll be limited to 18W charge speeds via USB-C cable but things are a bit confusing with wireless charging. The original Pixel Stand and new second-generation first-party charger allow you to top up at 10W, but with any other Qi pad, you’ll be limited to 5W.

The Pixel 3 and 3 XL happen to be a strange duo. Understandably the XL variant was ridiculed for the bathtub notch, but both devices were overall really solid — as our own Stephen Hall alluded to in his own review over 3 years ago. It doesn’t necessarily help that the Pixel 3 followed the Pixel 2, which is often cited by enthusiasts as the best of the bunch to date.

Heck, we can be the Pixel series’ worst critics at times but the Pixel 3 and 3 XL seemingly hold up admirably at this early stage of 2022. While the hardware was fairly standard for a 2018 flagship, banking on the software experience means that everything “falls into place” without much fanfare.

If you were to ask us if we recommend the Pixel 3 or 3 XL here in early 2022, despite the fact we think it’s a little underappreciated, sadly, it’s a no. Given the lack of official updates moving forward and the frustrating lack of RAM, you’re better off looking to the Pixel 4a 5G – itself an underrated Pixel. Sandwiched between the Pixel 2 and the Pixel 4, the Pixel 3 is certainly a quiet, unassuming addition to the series that got a lot right, but a fair amount wrong.